When one is raised knowing  aunts, uncles, cousins and in my case one grandparent, the sudden influx of a family history can not only be a surprise, but also shocking and heartbreaking.   That is how it was with my Great Grandmother Martha Jane.
In 52 Ancestors Week 4 she was the person 'I'd Like To Meet'.  After inheriting her 1890's Photo Album and discovering my Dad's maternal family history, there were so many surprises I could...and have...written scores of posts.
Still, through all the research, all the photo identifications and stories about each and every person I could make connections to...Martha Jane's life after the release of the 1940 Census was a mystery.
Nothing, not a clue as to her whereabouts or when she died.  Not knowing when she died and where she was buried was more than a brick wall...it was heartbreaking.
I so wanted for her to Rest In Peace along with her ancestors, her Marley parents and siblings, her sons and daughters and their loved ones.  After all, if not for the love, care and savings she put into the Album, I could not have shared our amazing family history with her descendants for generations to come. 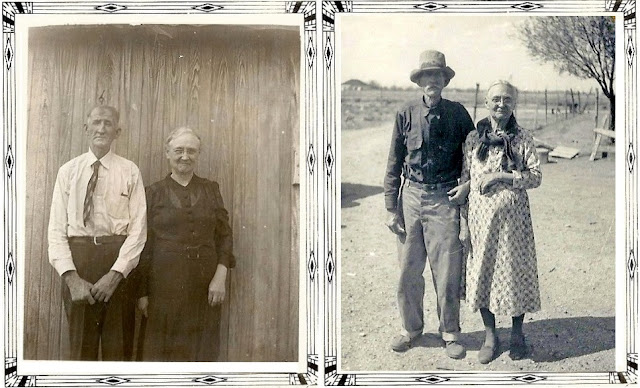 The mystery began to unravel and a few bricks began to crumble with the discovery of the old couple in the picture on the left.  Found in my Mother's Shoebox Album and marked on the back, "Willard's grandmother and old man 1953'.  The story was they had been living together for many years and it was assumed they never married as she never changed her name or used his last name on any legal papers or personal identification.
Imagine not only my surprise, but also my distress in learning that I had spent countless hours...even years...searching for a great grandmother who did marry the old man and whose last name was used on her application to a sanitarium and subsequently on her death certificate issued by the sanitarium.
Finally, I could identify the couples photo on the right that was found tucked under another photo in the back of Martha Jane's Old Photo Album.  Her wedding photo from 1942.  Date confirmed and documented from ancestry.com once I knew her last married name. 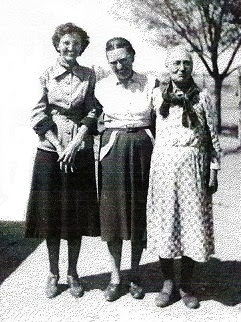 This was the last photo of Martha Jane and her daughters, my Great Aunt and Grandmother.  Several months after, her daughters committed her to a State Sanitarium Hospital.
It was a matter of putting two and two together, gleaning land holding records, and the sanitarium death certificate records.  It all added up to the unfortunate and saddest tearing down of a brick wall encountered in all of my family history research.
The circumstances of her being committed are understandable as the daughters could not care for their mother who was diagnosed with senile psychosis...known today as alzheimers.
As it turned out, the 'Old Man' and Martha Jane had been taking care of each other for several years with both of their mental health declining.
The 'Old Man' died a year or so after he and Martha Jane were separated.  He died in the Texas Home for Confederate Men.
Martha Jane lived 8 years in the State Hospital.  She died of heart and renal failure at age 86 as stated on the death certificate along with the contributing condition of senile psychosis.


She was buried at the State Hospitals cemetery along side her sister.
Yes, another Heart~Breaking Down Brick Walls.
Posted by Sue McPeak at 2/04/2019

it's funny. I swear there's a picture around in PA that looks just like one you have. Those old, old folks from way back all had the same "look".

Awww. Such a sweet story and sad story at the same time.

That's so sad. But you met your goal of finding where and when she died. I think it's interesting that her daughters thought she needed to be institutionalized by dementia, (when she and 'old man' could no longer care for each other), and then she lived another 8 years.