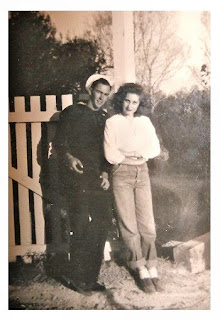 The Club Cafe's booths were finally empty. The customers were all back on the bus and on their way to the next bus stop in El Paso, Texas. The travelers left the Club Cafe in Fort Stockton tables full of burger baskets and coke glasses. Every salt, pepper and sugar shaker was empty, and the silver napkin holders needed refilling.
Two waitress' stood with hands on hips, wishing they could take a break before the next bus pulled in and unloaded it's hungry travelers.
Thel and Phyl were Iowa farm girls and had come to Texas to visit Phyl's sister. Best Friends and gals lookin for adventure in Texas, they took the waitress jobs so they could afford to stay in Texas and make enough money for bus tickets back to Iowa.
So, with no time for a break, they quickly stacked baskets, loaded glasses in the dirty dish cart, filled the shakers, poured sugar, and stuffed napkins. The Cafe was back in order and ready for the next bus load of travelers.
"Look, Phyl, sailors." Thelma pointed out the window where the uniformed guys had just gotten off the bus and were picking up their duffle bags. "I'll take that one," Thel nodded toward the tall, dark and handsome one who wore his Sailor hat set back and slightly sideways. "Okay, I'll take the other one," Phyl said as she filled the water glasses.
Sailor Willard, on his way home on leave to Grandfalls, Texas walked into the Club Cafe, looked into the blue eyes of the waitress waiting to take his order, and fell in 'Love at First Sight'. Her name was Thelma, and she was beautiful with those blue eyes, long dark hair, pretty smile and Iowa accent. 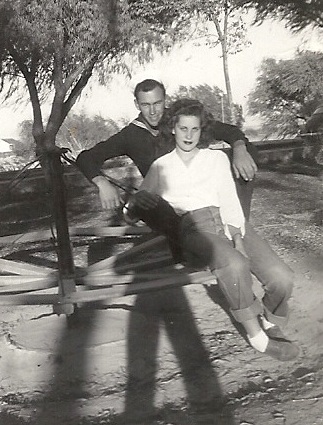 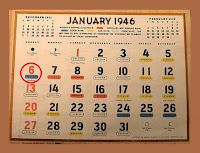 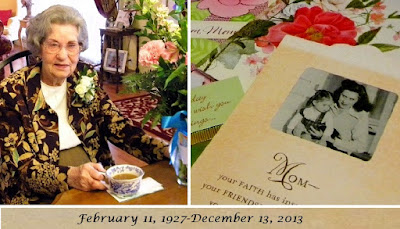 Email ThisBlogThis!Share to TwitterShare to FacebookShare to Pinterest
Labels: 52Weeks, In Memory

What a delightful story to celebrate their romance. Well done!

This is like a movie! I'd buy a ticket.