August
Fairest of the months!
Ripe summer's queen
The hey-day of the year
With robes that gleam with sunny sheen
Sweet August doth appear.
~R.CombeMiller~
Obviously R.C. Miller was not from Texas.  I'd have to rewrite a line or two or four to read...
Hottest of the months!!!
Blistering summer's queen
The dog-days of the year
With T-shirts soaked with sunny sheen
Sweltering August you are here. 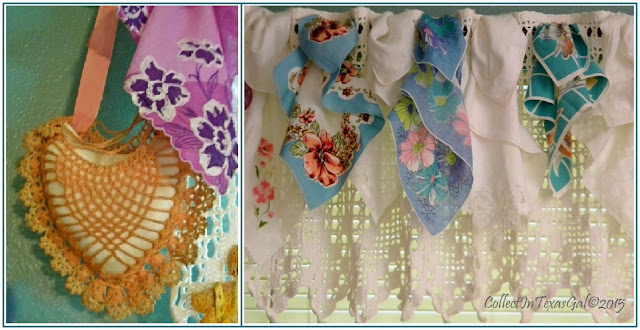 Notice I didn't say 'Hankies' soaked with sunny sheen.  Even though I have plenty to use on hot summer days, they are not the sort to use for mopping one's brow or blowing one's nose.  You see they are 'Ladies Hankies' that perhaps once dapped at a perspiring forehead or shielded a dainty nose from an unpleasant smell.  And now....they are a 'Valance' in my 'New Sewing Studio'. 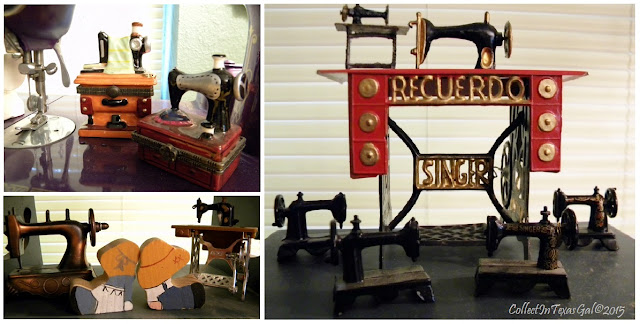 The 'Miniature Machine Collection' was the easiest of the machines to move.
More 'New Sewing Studio' coming later.
I won't say when....August may be as sketchy here on CollectInTexas Gal as was July!
Posted by Sue McPeak at 8/01/2015

Hi Sue! What a cute valance! I'm sorry you're so hot in Texas!

Love your hankie valance! That is precious. Today, the 1st day of August, was actually a little bit better here in our part of Texas. A breeze blew all day. The pool water was cooler. And the night air is actually kind of pleasant.
Life & Faith in Caneyhead

I bought a hankie yesterday that I thought would be great for a project. Postcards and hankies for $1 are just the best values if you ask me. I love your valance. I think I want to try a lampshade? My cousin from San Antonio sold his house and bought a class A motorhome, says he is only going back around Christmas when it is cooler.

Sweltering August right on the sweaty heels of sweltering July! I'm not ready for summer to be over, but I'm tired of this heat! I'm tired of Virginia's humidity!

Great re-write of the poem! I had to chuckle.

Cute curtains, and love that red treadle! Have fun setting up your new sewing studio. I'll be there the end of September (when it starts to cool down a bit).

oh you captured August perfectly in your poem re-write. Whew! Glad you are back for a bit - stay in the shade, drink plenty of fluids, and have a great week

Such a lovely post and photos, a perfect welcome to August! :)

I grew up in New York City. August was the month I dreaded the most - even more than the heart of winter. We are having a heat wave right now where I live in upstate New York and I am not going to attempt a poem. Except if it is an ode to air conditioning. Alana ramblinwitham.blogspot.com