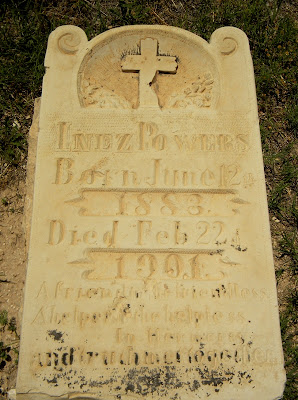 A friend to the friendless
A helper to the helpless
In her Mercy
and truth met together
Here lies Inez, considered a young woman by the age standards of 1901, dead at age 17, and yet she fulfilled her epitaph as a friend to the friendless and a helper to the helpless.  I get that....it's the rest of the inscription that intrigues me.
Inez was laid to rest in what is now a Texas Historical Landmark Cemetery, but at the time of her death had been the burial site for soldiers protecting the San Antonio to San Diego mail line.  These Troops also protected the Texas frontier from Indian raids into Mexico on the infamous Comanche trail.
Soldiers and their dependents interred at the Old Fort Cemetery were moved to the San Antonio National Cemetery when the fort closed in 1886.   Local citizens continued to use the cemetery after it was abandoned by the military, and that is how it came to be the final resting place for Inez and several infamous characters from the frontier town of Fort Stockton, Texas. As a former resident of this West Texas town, and a member of the Historical Society, I photographed most of the headstones years ago.  It is only in the last year that my Ancestor Research has brought me back to Fort Stockton and the connections it's residents had with my pioneer ancestors.  Such is the case of Inez (surnames omitted for privacy of descendants).

Not only was Inez's headstone in itself of photographic and historical interest, but the inscription was intriguing.  So began my quest for 'Who was Inez' and what was  the meaning of 'her Mercy and truth met together'.

Inez was born June 12, 1883 in Illinois to Homer and Josephine...the first born of their five children.  The family first appears in Texas records with the death of Josephine in 1897 in San Antonio.  Inez was fourteen and her youngest sibling was two.  In June 1900, Inez was a 17 year old school girl living with her widowed father and four younger siblings in Fort Stockton, Texas, according to the US 1900 Census.  Perhaps the most interesting information from that census was the occupation of Inez's father.  Homer was a physician. 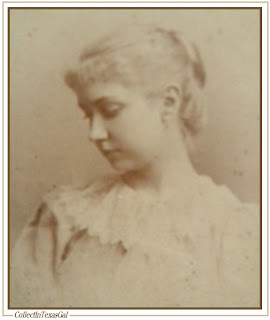 Inez's epitaph becomes more clear as a 'Friend to the friendless and a Helper to the helpless'.  As the daughter of a doctor and oldest of four younger siblings, her opportunities for this admirable characteristic were many.  With her death on February 22, 1901, four months before her 18th birthday, her physician father not only lost his oldest child, but likely his helper in the care of the helpless.  Later that year in October, Homer married a widow with six children.  In 1907, six years after his first daughter's death, Homer's last daughter was born.

In her Mercy
________ and truth met together.
I wonder...is Inez's nonsensical inscription missing a word
or is it a riddle left unanswered by her grieving
Merciful Doctor Father?
Posted by Sue McPeak at 7/30/2013