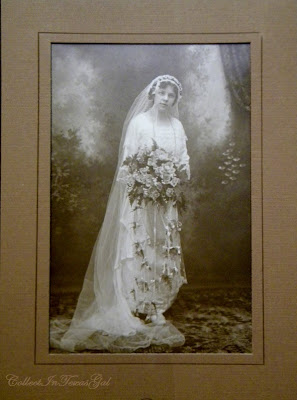 There are no June Brides in my Pittman Family Tree...at least as far as I can tell from the research I've done from the Colonials through the Georgians line of Direct Descendants.  Of course there have been lots of marriages...most of them documented through Courthouse and Family Bible records.

There are also no 'Wedding Pictures' of Brides married in any month of the year.  That's understandable for the Colonials being as the first camera was not invented until 1840.  Even after folks started having wedding pictures made, they usually looked like they were standing in front of a firing squad.

At any rate, as a collector of vintage photographs, I have substituted Unknowns from my collection in place of the no show photos of my ancestors...like this 'Leaning Bride' who looks like she might be explaining why her bouquet weighs more than she does.  As it turns out, that Big Bouquet is one of the reasons why June has traditionally been the most popular month to get hitched.

It seems that back in the day, the Bride stunk!  Yep, under the frills, lace and veil was a gal whose last full tub bath was in May after a long winter of spit baths.  By June the flowers were in full sweet smelling bloom and the bigger the Brides Bouquet, the better for everyone's olfactory senses.  Hence the tradition of the Bridal Bouquet, the Brides Maids flowers and all that rose petal throwing in the isle.

More than likely the June flowers kept the wedding march from being called
'Here Comes the Stinking Bride'.
﻿

Here are some Bride/Wedding Posts from my Family Tree.
My Wedding
Juno Goddess of Love, Ole'
My Parents Wedding
Love At First Sight...It Happened In Texas
Posted by Sue McPeak at 6/02/2013

Funny! I have heard that the smelly factor was the reason ladies carried nosegays. I like to call them posies. I would like to carry a posy just for giggles because I smell pretty good.

Cool fact! I'd never heard that before.

I hope you had a nice Sunday. ☺

Hi Sue, Still laughing about the reason for the bridal bouquet. I clicked on your wedding post expecting to see your wedding pic. Is that you and Hihoney? Cute photo.

I also clicked on your parents post. A darned good looking couple I have to say. So, these Texas guys must have something special. Very cute posts.

Thanks for your visit. As usual I am late visiting. Where on earth does the time go???

You'd think a bride could at least take a bath before her wedding!!
"Standing before a firing squad" -- I'm still giggling at that!

Great story on the bridal bouquet. Love the picture. There was something demure about the brides of those days. It is probably what made them intriguing to suitors. The photography effect has its charm as well. Lovely shot.

Hi Sue .. interesting - I guess baths were pretty precious .. no running water - and can see why she was carrying such a large bouquet ..

Nosegays, posies, oils, lavender in gloves .. all helped keep those pongs at bay .. must have been a very different lifestyle ..

Oh my....you do think a bath the evening before her marrying day could have been accomplished! And him too I hope! :) Sue...it was so good to see you. It has been too too long. Hope things are well and good over your way. xoxo

LOL -- great explanation! And what a surprise. I knew that title was a promise of something good to read.