'Twas The Night Before Christmas In Texas 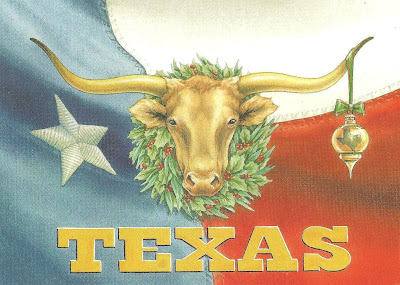 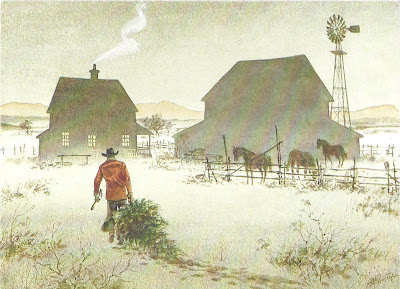 It's Christmas!
The loveliest time of the year,
The season of love, goodwill
and good cheer
MERRY CHRISTMAS
Isn't that the NICEST greeting? So filled with good wishes, good cheer and just...well, GOODNESS!

Ya'll do know that Santa's North Pole is located in Texas?
Yep, as a little girl who knew only one State...Texas...I sent my Letters to Santa at this address:
Santa CowboyClaus
Yeehaw Pole
North of Amarillo, Texas 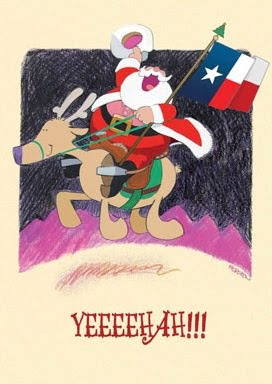 'Twas the night before Christmas, in Texas, you know.
Way out on the prairie, without any snow.
Asleep in their cabin, were Buddy and Sue, A dreamin' of Christmas, like me and you.
Not stockings, but boots, at the foot of their bed,
For this was Texas, what more need be said,
When all of a sudden, from out of the still night,
There came such a ruckus, it gave me a fright.
And I saw 'cross the prairie, like a shot from a gun,
A loaded up buckboard, come on at a run,
The driver was "Geein" and "Hawin", with a will,
The horses (not reindeer) he drove with such skill.
"Come on there Buck, Poncho, and; Prince, to the right,
There'll be plenty of travelin' for you all tonight."
The driver in Levi's and a shirt that was red, Had a ten-gallon Stetson on top of his head.
As he stepped from the buckboard, he was really a sight,
With his beard and moustache, so curly and white.
As he burst in the cabin, the children awoke,
And were so astonished, that neither one spoke.
And he filled up their boots with such presents galore, That neither could think of a single thing more.
When Buddy recovered the use of his jaws, He asked in a whisper, "Are you really Santa Claus?"
"Am I the real Santa? Well, what do you think?" And he smiled as he gave a mysterious wink.
Then he leaped in his buckboard, and called back in his drawl,
"To all the children in Texas, Merry Christmas, YA'LL"!

WISHING YOU A HAPPY HOLIDAY

That is the CUTEST card and poem!!!

Surely it's still August, isn't it?

Like the poem and the man dragging the tree through the snow.
sandie

What a cute card and I adore the poem! Grace xoox

Such a good post; I needed some cheer tonight,thanks!
Merry Christmas to you and yours.

Where else could Santa be! What a wonderful fun post, Sue and a great Texas Christmas card!