GeneaBlogger Advent Calendar Prompt for Day 6...Did you ever send a letter to Santa? 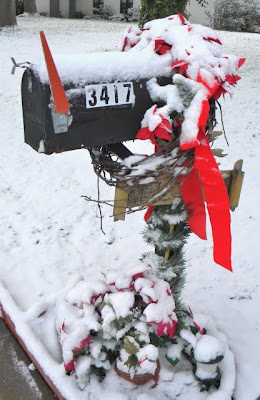 Dear Santa,
How are things up there North of Texas? I used to ask Mama where the North Pole was and she always said, "Sue, it's North of Amarillo".

Since it snowed alot in Amarillo that sounded like a good place to imagine the North Pole. Course that was when I was about ten, and the year you brought my 'Favorite Childhood Memory of Christmas'.

Now, I'm all grown up and then some, but I figure it's better late than never to thank-you for providing that 'Special Memory'! You see, I'm sharing it with some very 'Special Bloggin Friends' on CollectInTexas Gal, and I'm thinkin you're on top of the latest Computer Technology, the Internet, the WWW, and Bloggin with all the requests you must get this time of year. Why, I'd be surprised if you're not a 'Secret Santa GeneaBlogger'...with your Family History and all. 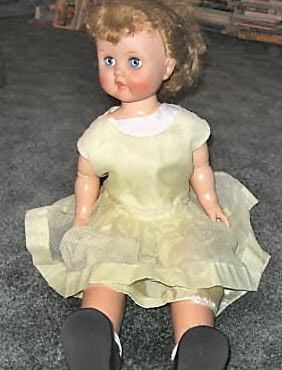 Santa, I wish I could say I still have Sara Jane. She's been a vivid memory my whole life, and I was 'Snowed-Away' when I found her on eBay. The lady who has her now wants $99 plus shipping from Seattle, Washington. Did you charge shipping back in the 50's?

Thank-you for wrapping Sara Jane so pretty that year. I was so excited to unwrap the box and see her beautiful face through the cellophane window. I was amazed that she was so tall and walked...with my help. And, altho, I was a bit of a TomBoy, and had never had anything but paper dolls, I treasured Sara Jane, and wish I still had her today.

So, Santa, I have been a very good girl this year, and I know that $99 is still alot for a doll, but I'm sure Sara Jane would like to be mine again. I'll pay for the shipping.
Merry Christmas with Lots of XXXXOOOOO's,
Sue


December 6, 2011
Oh, Yes...I wrote letters to Santa when I was Ten...way back then!
And as you just read....Santa still hears from me now and again!
GeneaBlogger Advent Calendar Day 6 Question #2
Do you STILL Believe In Santa Claus? 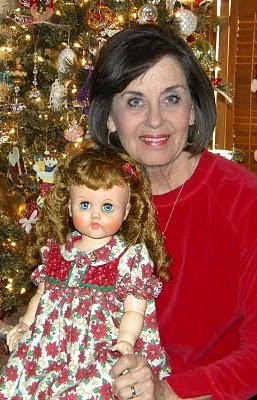 I believe in Santa! And I remember and had one of those dolls - same hair and all. She was my favorite. Merry Christmas. sandie

Your doll is beautiful, so glad she made it home. My favorite doll was an Annie McGuffy doll, think I will research int internet and maybe write a letter to Santa. Maybe he will think I've been a good girl this year. Brrrrrrr it's cold in Amarillo this morning, we are in N. Texas and it is cold!

Oh I so still beleive in Santa!! lol I love your blog post. Your dolly is super cute. We are expecting snow in NY onThursday. It has been very warm. I have been so enjoying it. lol Grace xoox

Oh my gosh, Sue.. WHERE ARE MY TISSUES?! You KNOW I have a very special place in my heart for dollies, and I'm so happy to hear Santa brought this one for you!!! She's BEAUTIFUL!.. And yes, I believe in Santa too! ((hugs)) ~tina

I too went in search for beloved Thumbelina, that I handed down to my daughter. She said she didn't know what happened to her. She also traded the head off of my Midge doll so she went as well. A sweet story Sue!~Ames

I believe in Santa! What a lovely ending that was to your post.

What fun, to have a favorite dolly again. Merry Christmas pretty lady.