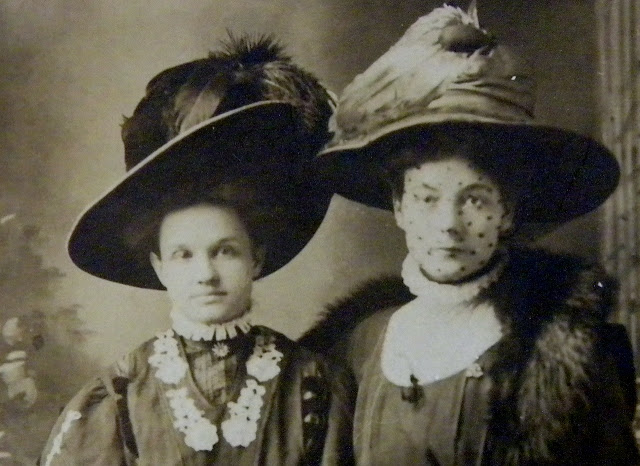 Savannah! Who names their children after a town?
Apparently my Great Great Grandparents!
Of course when you have fourteen or fifteen kids and the first ten or so have already been named after grandma, grandpa, aunts, uncles and all the famous folks of the time, it comes down to getting tagged with Elevenna or Fifteena or a Place.  I'm pretty sure that's how the name Savannah got it's place on a branch of the Family Tree.  Bless her heart, Savannah G. was the last child of Rene Marion and Mary Ann, my 2XGreat Grandparents from Cobb County Georgia.

Surely that 'G' was for Grace! 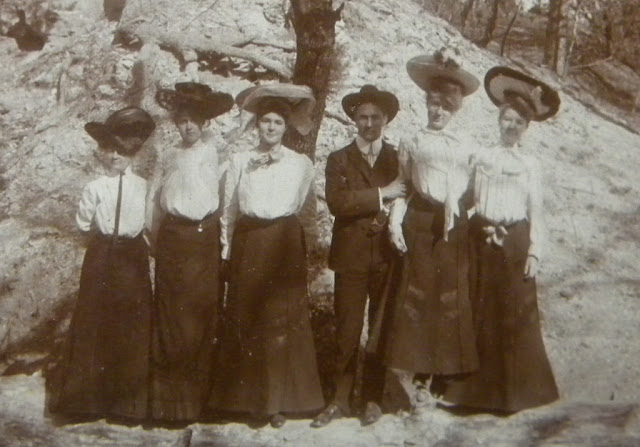 Believe it or not there's a  couple of 'Good Things' about being 'Fifteena Caboosla'!
First...since your Ma was in the 'Family Way' every year since gettin' hitched, that meant that 'HandMeDowns' weren't full of holes.  Now the length may not have been just right...especially if older sisters were taller...of course then there's no worries about showing too much ankle...just trippin' and fallin' on your Caboosla!
Secondly...having a slew of olders sisters meant 'Older Beaus'.  However, from the looks of things, one Beau to Five Sisters was pretty slim pickins back then.  Course, gettin' to 'DressUp' and go strollin' in the woods should count for somethin'.
And lastly....The HATS!!!!
I'm not sure what Savannah would say back in the 1870's, but in 2011 we'd say,
"OMG, that hat's to die for...it's DaBomb". 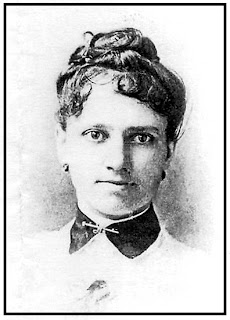 Savannah lived her whole life in Georgia.  Her middle initial was B not G.  It stood for Bartow...apparently another Family Name of significance which I haven't found...yet!  I thought G for Georgia would have been appropriate.

Her famously named sibling was my Great Granddaddy, George Washington Pittman (you can read his story HERE).  Her sisters were Mary Eugenia,  Fannie Margaret, Elizabeth Lizzy and Emma.  Other brothers were William Howell, Albert Singleton,  James Allison and Isacc Marion.

Savannah married Hiram Brown on December 16, 1895.  So far in her Tree Branch I have found three sons with fairly common names:  William M., Paul R. and Silas P.  I can hardly wait to find out what their middle initial stands for.  I'm thinkin' M for Moreofus,  R for Righton, and P for Pausin....just thinkin' there will be more LilBrown's to come...maybe a Fifteena Caboosla!
Posted by Sue McPeak at 8/24/2011

Curtains in My Tree said...

I like the name Savannah, i knew a man named Savannah. In Missouri

And yes OMG her hat was to die for.

What a fun post! Love learning about the family tree. I too love that hat!!

Hi Sue, I am always blown away with the family photos you have. It is wonderful to have them after so many years have gone by. Someone in your family was a fine historian.

I love the name Savannah. Have you ever been there. The history of that town is awesome and it is a beautiful place.

My father's last name was Coulter. I have two great nephews named Coulter. We love that our family name is used this way. We have a John Colter in our family who was with the Lewis and Clark Expedition in 1804. He is in written in history as the first white man to discover Yellowstone Nat'l. Park. My maiden name is Coulter. A bit of our family history.

You are, indeed, fortunate to have such great pictures - and we're lucky that you share your witty thoughts on your ancestors! Savannah was lovely!

Love that name - Georgia! I have a niece named Scotland - Scotie for short.

BTW - Love your new header too!

I enjoyed your post. It’s a lot like college – we should absorb everything we can but ultimately you need to take what you’ve learned and apply it.