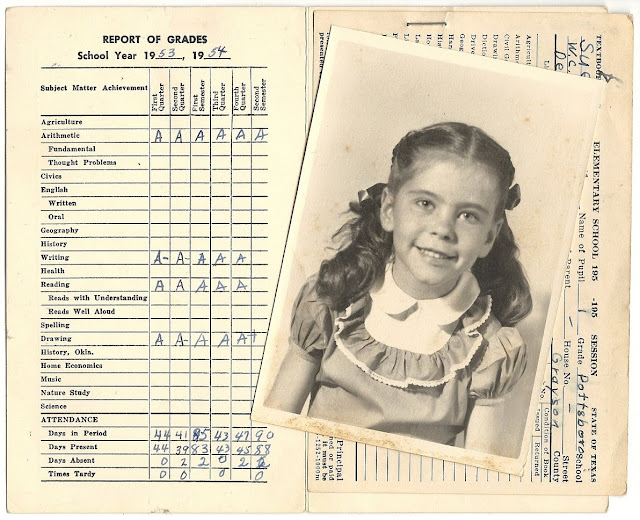 Ya know, starting school has sure changed since 1953-54.  The rules are all different...well in the State of Texas anyway.  Back then you had to be Six years old before September 1st and had to have your small pox vaccination that left a big ole scab then a quarter size scar...mine ended up as dime size on my shoulder even though they poked my upper arm.  Some kids had to wear a plastic cup over their scab...I didn't...maybe that's why it ended up on my shoulder.  Anyway, back then there was no Pre-School....nope, you turned Six...waited til September 1st and went straight to Real-School starting with First Grade.
Here's what I knew about the Letter A....Nothin'!  At least I don't rememer knowing anything about the Alphabet and I surely don't remember knowing that 1+1=2 was called Arithmetic.  But as you can see by my First Grade Report Card, I did learn about Arithmetic, and was pretty good at 1+1=2 with All A's. 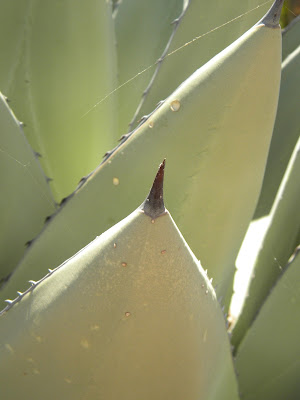 Well, that was a looooong time ago, and I'm sure the first thing I learned about the Letter A was APPLE.  However, we don't grow Apples much in West Texas, so when I think of the Letter A today....It's gotta be Agave.

Chiefly Mexican, agaves grow in the southern and western United States...TEXAS... and in central and tropical South America. They are succulents with a large rosette of thick fleshy leaves, each ending generally in a sharp point. Along with plants from the related genus Yucca, various Agave species are popular ornamental plants.

Agave grows slowly to flower only once. During flowering, a tall stem or "mast" grows from the center of the leaf rosette and bears a large number of shortly tubular flowers. After development of fruit, the original plant dies, but suckers are frequently produced from the base of the stem, which become new plants. 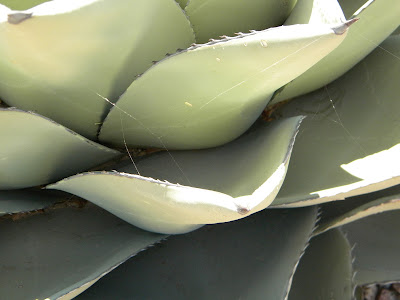 It is a common misconception that agaves are cacti. They are not related to cacti, nor are they closely related to Aloe whose leaves are similar in appearance.
Agave species are used as food plants by the larvae of some Lepidoptera (butterfly and moth) species.

Primarily known for its integral role in the production of tequila, agave juice is becoming popular in Western kitchens for its healthy properties as a diet food and a natural sweetener. Made from the core of the agave plant, agave juice--which is poisonous when raw--is processed by heat and enzymes into agave nectar. Read more: What Is Agave Cactus Juice? 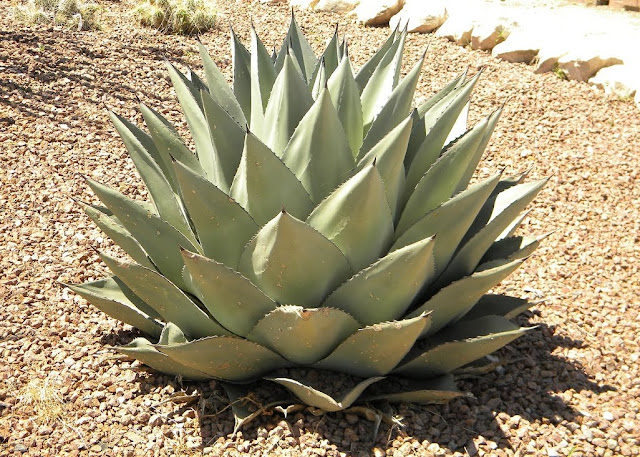 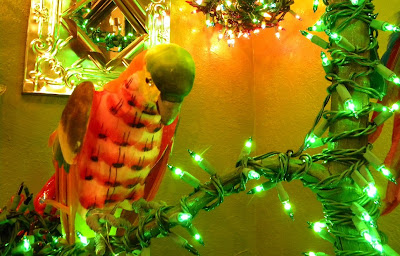 One species of the Agave is the Century Plant
Century Plants bloom only once in their life, the blooming spike is so large and grows so fast that it saps all the resources of the plant, which then dies, leaving a tall wooden seed stalk. The plant is called the "century plant" because of this "once a century" bloom (actually the plant lives an average of 25 years). It was also an important plant to indigenous people, being used for medicines, fiber, needles, and food. The stalk is often used as an ornamental decoration in desert landscaping or as a Christmas Tree.
I'm really happy I learned my ABC's in 1953-54 in the First Grade so that I am well prepared for participating in ...

...I'm even happier that I learned Arithmetic so I knew that the
Letter A was #1 and the place to Start
Round 2 of Alphabet Thursday with Jenny!
Posted by Sue McPeak at 9/23/2010