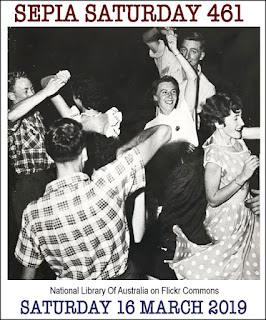 Back in the day...1965...we contorted our bodies to do all kinds of arm flaying, leg bending, torso twisting and head bobbing...and called it dancing.
The Twist!  Now in Texas it was not unfamiliar except it had an 'er' added and instead of putting on Cubby Checker's 45rpm we ran for the cellar.
Come On, Baby, Do the Loco-Motion.  My cowboy Dad said that was just Loco, and reminded him of a bucking bronco he once had named 'Loco'.
Mashed Potato Time !  Seriously, who didn't love mashed potatoes!  They were a stable at our supper table along with a skillet of fried chicken dripping gravy.
Moving on...literally...I can't repeat what my Dad said about the Watusi, the Monkey and the Jerk.  All of which I learned and practiced with American Bandstand streaming through our Rabbit Ears antenna and black and white Motorola.  So Groovy...The Dance Styles of the 1960's...take a look on You Tube.


And at these photos from my 1965 Senior Prom 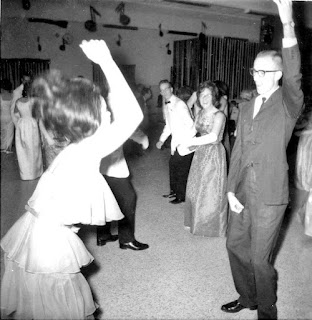 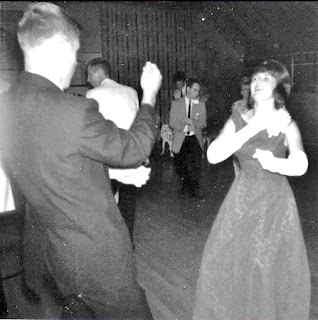 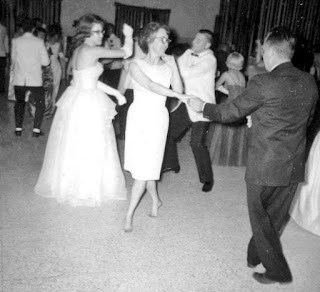 I know...right...everyone dancing the Monkey
....except my Typing teacher and her husband the Principal.
So Old School Rockers. 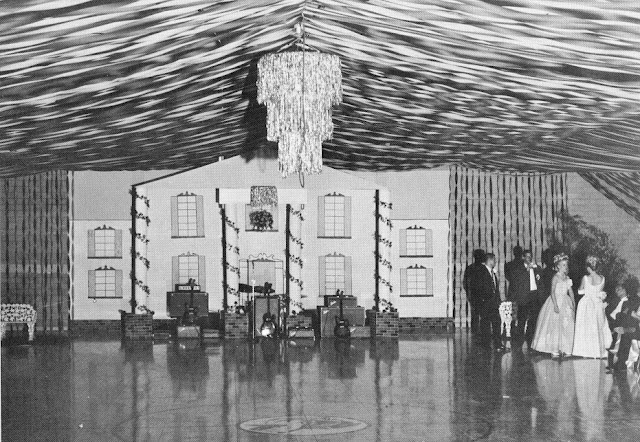 It's 'The Senior Prom'!
Tradition dictates the basketball court be draped in crepe paper with a tinsel spinning chandelier.

Tradition again....Prom Pictures in the living room.
That all important Prom Dress dated not only by the ruffled styled skirt
but by the Lamp Shade of the day. 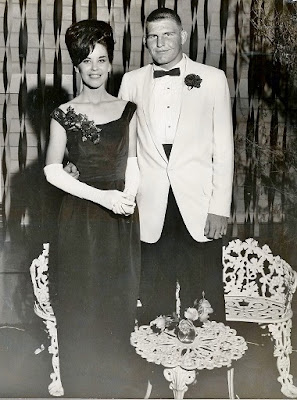 Some of us bucked the traditional ruffles, miles of netting and layers of sateen for red velvet classic Audrey Hepurn formal with white elbow length gloves.  Wasn't my date handsome in his match to my red with bowtie, cumberband and boutonniere?  Such great memories and ones we got to relive at our 50th Class Reunion. 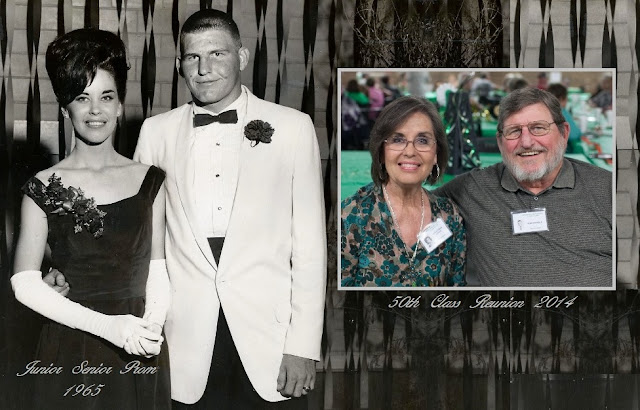 A few changes in 50 years.  Me with less hair and him with more, and both of us with specs.
BTW...he was my date for one memory filled night and friend for life.
My dance partner for life? The first guy in the living room photo! 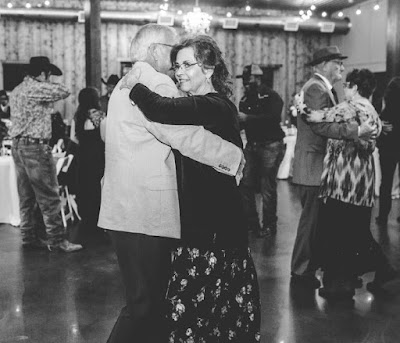 Here we are...dancing the Cowboy 2 Step...at our granddaughters wedding.
A little later in the evening we danced the 'Funky Chicken'.
Thankfully...no pictures!
Linked to Sepia Saturday 461...Dance on Over!!!
PS...The Hitchhiker was a dance my Dad had the biggest rant about.
He said, "Sue, DO NOT EVER pick up a Hitchhiker!"
Posted by Sue McPeak at 3/17/2019

Excellent match for our theme. Can almost hear the music playing in your photos.

Those were the days my friend, we thought they'd never end...

Amazed by the fancy hairstyles for the prom.

OMG - what a blast from the past! Why did we think the Jerk was such a great dance?!?! I loved the Mashed Potato - not so easy with rubber soled shoes though.

What fun! I thought the first photo showed the Jerk...until I saw your caption saying it was the Monkey. And now I swing dance like your typing teacher. Great retrospective photo of you and your husband.

I directed a Jr.High honor choir in performance to "Land of a Thousand Dances". The middle of the song was all accompaniment for each dance: the jerk, the swim, the mashed potato, the pony, etc. and I had all the kids do the dances. They moaned and groaned about it, but I told them their parents would love it - and they did, and the kids had the biggest smiles on their faces as they came down off the risers. :)

very fun post and I love the hairdos, etc. Quite a lovely pair both past and present...nice to have those pics for memories and to keep on kicking up the heels together.

I love your look for the prom! Very smart and elegant. Great photos, memories, and match to the prompt!