Collectin Poncho & SleighBells Behind the Barn!!

Pancho Navidad is Mexico's version of Santa Claus. Pancho Navidad crept into Mexican Christmas lore rather recently, and is gaining popularity every year, and is one of the Santas from 'The International Santa Claus Collection' that this GRIT started in 1993.

Christmas festivities begin in Mexico nine days before December 25. Each day a different home in the village serves as the 'posadas," a word meaning lodgings. A procession is formed to reenact the journey of Mary and Joseph into Jerusalem. The procession is accompanied by a guitar and Christmas carolers. When the group arrives at the preselected posadas, they place figures representing the holy family onto a temporary altar. After this ceremony, celebrations continue for the rest of the evening.

Here are a few of the International Santa Figures in my Collection. They average 5" tall, are made of resin, are hand painted, and have a short history of their origin printed on the box. They were created by International Resourcing Services, Inc. of Northbrook, Illinois.
From L to R.
~'Kwanzaa of Africa'...celebrated December 26th through January 1st.
~'Star Man of Poland' who brings gifts on December 6th.
~'The Three Magi of Spain' who bring gifts on January 5th, the Eve of Epiphan.
~'Weihnachtsmann of Germany' who brings gifts on Christmas Eve December 24
~'Father Christmas of England' who brings gifts on Christmas Day to children who make their list and throw it in the back of the fireplace. If a draft from the fire carries the list up the chimney, the children are assured of receiving their requests. 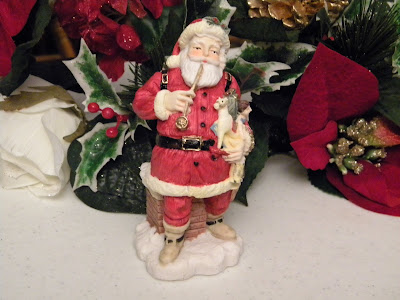 In the United States, Christmas gifts are brought by Santa Claus. According to American tradition, Santa Claus lives in the North Pole (or North of Amarillo, Texas) where he makes toys (specifically my SaraJane doll) with the help of tiny elves. Santa keeps a record book (and letters) of good (that'd be this GRIT) and bad (that'd be my Brother) children. On Christmas eve Santa Claus fills a sack with toys and flies around the world (was always really late to Texas) in a sleigh pulled by eight reindeer (deer season is through December in Texas, so they landed and took off really fast...or so my Dad said when I caught him eating the Oatmeal Cookies I'd baked for Santa.
Back to tradition...Santa enters homes through the chimney (or meets your Mom and Dad out behind the barn if you don't have a chimney...I never thought to look there) anyway, he leaves presents under the Christmas Tree and small toys, fruit, and candy in the stockings (we used Dad's Socks cause they were bigger) children hung by the fireplace (clothes pinned to a rope strung over the door). Bad children get a lump of coal (no coal in Texas...rocks).

OK, Ya'll, here's the rest of the US Santa history without the Texas inserts.
Santa Claus was brought to the United States by the Dutch settlers that landed in New York. However, Santa did not obtain his modern appearance until 1822, when a man by the name of Clement Clarke Moore wrote the poem, "A Visit from St. Nicholas." Clarke's word imagery described Santa as a plump, jolly old elf, having red cheeks, a cherry nose, a white beard, and a fir trimmed coat. This image of Santa was further developed by Thomas Nast in an illustration of Santa Claus that appeared in Harper's weekly in 1881. 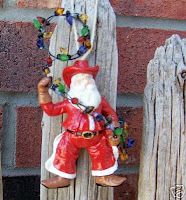 PostSanta...I guess it'll be OK to give New York North Pole status. Afterall, it is North of Amarillo. But, I'm pretty sure my Daddy said Santa was a Texan...not a Dutchman.
Posted by Sue McPeak at 12/06/2009

I loved the info here, what fun and thank you!
Feliz Navidad!!!

What wonderful Santas and thanks for the Santa education. Isn't it amazing the way that Christmas is celebrated so differently thoughout the world.
Have a wonderful week.

That's a great santa collection you have. Thanks for sharing the Mexican tradition, very interesting and sweet. Blessings!
Gwen

I adore your Santa collection! Thanks for stopping by and commenting. Kerrie

what a great Santa Collection you have I am quite loving Poncho!!lol Thank you so much for visiting blog and telling me about him! hehehe Poncho and my pink deer would work so great together...lol Hugs Grace

Oh You've wow'd me with so much folklore, legends and trivia. I think it is so much fun to share in holiday diversity. Your Santas are charming. Thanks and Holiday hugs from Mollye

Morning, Great info......beautiful collection of Santa. Hope you have a great day.

My Dad collects Santa's now...I will have to steal some pictures and post them. They buy a few every year. Latley, it is skinny santas they love.