Sue use to be a popular given name. On the PopChart of Girls Names it's highest ranking was #100 back in 1950...I was three years old.

Everyone called me Sue, not SusieQ or some other derivative of Sue, so you can imagine my confusion when I started school and my first grade teacher called me Sandra. Yep, Sue is my middle name. It was years before I came to grips with that fact and learned to spell Sandra.

I never thought of myself as a Sandra and for sure could not imagine putting the two names together like Buddy Holly's Peggy Sue or the Oak Ridge Boys Bobbie Sue. I suffered some when Dion and the Belmonts came out with Runaround Sue.  So by the time Johnny Cash broke all the Gender Name Rules and again popularized Sue with  A Boy Named Sue, I was one tough Sue.

When I entered the world of Quilting and discovered Sunbonnet Sue, we became instant friends.  Here was another Middle Name Sue that I could totally relate to. 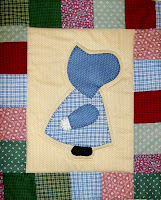 She was almost always dressed in my favorite 1930's flour sack fabrics.  I loved hats...she did too.  We were both into quilts.  We did alot of the same things, like Sewing on Wednesday, Baking on Thursday and Church on Sunday.

Sunbonnet Sue became my Quilting Signature Symbol, and I have collected any and everything that represents and depicts her...from plates to pin cushions.

I have rescued her from dumpsters...Sue To The Rescue of Sunbonnet Sue.  Found her in Junktique Shops, Flea Markets, Garage Sales and Thrift Stores.  She decorates my walls, lays on my beds and  clips on my sewing machines.  I've stitched her, pinned her, and studied her family genealogy.


She was the Logo for Sue's Quilt Shop...Oooops, that kinda slipped out.
Now you know why I have a Mega Fabric Stash.
Now you know how I became a Quantum Mechanics Fabricator.
Now you know why I am a Prolific Patchwork Pattern Piecer.
Now you understand why I 'Cut Up Yardage to Make SCRAPS.
Now YOU know something the LoneStar BeeGals don't. 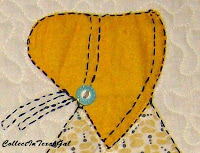 Can you keep it under your Bonnet for awhile longer...you know...about
Our Middle Names being Sue?

Alma to Irene
I'm making Sue's name Tag.  Do you know her Middle Name?
Irene to Alma
I think I heard her say she was named after her Grandmother Effie.
Alma
Bless her heart!!!

I hope your Monday is a good one. ☺

I started out reading the Sunbonnet Sue and then got sidetracked by all the other interesting things to read on your blog.

I can appreciate the sunbonnet sue because it was very popular when I was a child.

:-) Neat post! My old boss's middle name is Sue. Her first name is Diane. Pffft, she doesn't even look like a Diane. ;-) We've always caller her Sue.

I love that you collect Sunbonnet Sues. When my mom died, I inherited a bunch of magazines which I think, she might have inherited from her mom. A stack that would have gone to the dumpster had I not intervened. There is a quilting magazine with the pattern for Sunbonnet Sue. I've always fantasized that maybe when I retire... But, we all know I'm incapable of keeping even a simple none-patch on the straight and narrow...

Sue is a pretty name. My grandmother loved a doll just like Sunbonnet Sue. She had several in her kitchen. :D

I have a friend who loves to use the tag Suzie Q.
I just buy quilts, love them and so glad there are talented quilters. Never heard of Sunbonnet Sue,very cute.

Sunbonnet Sue!! Who knew? I am learning all little interesting tidbits this year that I never knew before! She's adorable :)

My mother's name is Sandra, but, you don't look like a Sandra, you look like a Sue. Now, to find you a sunbonnet.....

Hi Sue ... that'd be so muddling for a kid to be called by their middle name .. and the thought of Sunbonnet Sue as a quilting character is fun ..

Love your Sue though .. and the quilts - small scraps .. fortunately now I have a friend I can pass them over to ...

Good for you rescuing all the Sunbonnet Sues.