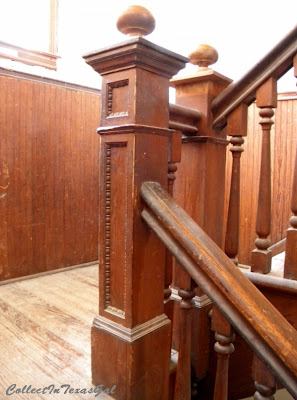 It's Monday afternoon and my first time to attend the Courthouse Stitchers Monthly Meeting.  I walked up the steps and into the foyer of what was once a grand old Texas Courthouse,  and saw Alma waving me over to the center of the large community meeting room where THREE large quilt frames were setup in a horseshoe shape.

I'd met Alma at the Local Quilt Shop and she invited me to join the guild, and now as President she was  rapidly explaining how informal the meeting was and that the business part of the meeting was getting to the business of quilting.  So without further ado she introduced me to the ladies sitting around the first frame which she referred to as the 'A-Frame'.

Four of the sweetest looking blue haired ladies were stitching on a Grandmothers Flower Garden quilt top which was pieced in 1930's fabrics.  Alma introduced me to Beatrice, Irene, Mae and Sudie, and explained that they were the founding members of the Courthouse Stitchers, and whose seats were permanently placed around the 'A Frame'.  The 'A Frame Foursome' looked up in unison, smiled sweetly and said, in unison, "Hello", and went back to their tiny twelve stitches per inch flower garden.  As we moved on, I noticed the A-Framers chairs were fitted with comfy cushions and had their names embroidered on the chair backs.  Appropriate for directors, I thought to myself. 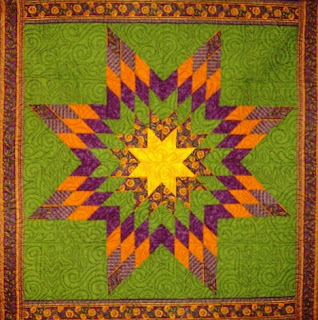 The center frame of the horseshoe had six chairs, three on each side of a what looked to be an extra long frame with a Lone Star quilt top.  Five of the six chairs were occupied and as the introductions were made I noticed these ladies could be categorized by their hair as well.  There were a couple of SaltNPeppers...Grace and Flo,  two Clariol Gals...Connie and Diane, and  The BigHairGals...Sarah and Alma.

These Gals stopped their lively chatter to say hello and welcome....and ask a polite question or two about my quilting, which was their way of sizing me up for which of the two frames would be the best fit. They knew it wouldn't be the 'A Frame', as the BlueHairs ruled there until they Stitched their way through the Pearly Gates and secured their chair around that Great A-Frame in the Sky.  That left the 'LoneStarFrame' and the yet un-identified frame.  It didn't take much to figure out that all the adjustable, padded chairs were taken and from the looks of the 'Nests', everyone was socked in for the duration of the blazing Lone Star and for that matter what ever quilt top came next.

"TEXAS"...that's what she was stitching around with a concentration and focus that spoke volumes of her intent on perfection.  So engrossed was she that Alma finally tapped her on the shoulder to get her attention.  "Josephine, this is Sue.  She's a new member and will be stitching here with you on the 'Texas Frame'. Without missing a stitch, Josephine nodded towards the unadorned folding chair on the other side of the Texas Frame. She continued her stitching while I settled into my 'FoldingChair Nest' and fidgeted around organizing what I thought I would need to start stitching. "Are you done", Josephine asked as she sunk the knot into the batting and clipped the thread signaling the end of her stitching around the Letter A.

Then it happened.  I was Out On A Limb, so to speak, as an overwhelming feeling, sensation of deja vu came over me when Josephine finally looked up and said, "I'm glad you are here, Janie.  There is alot of quilting to be done on this Texas Quilt. You can start stitching on this block." 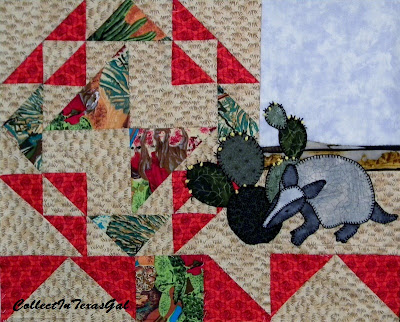 So stunned was I from the 'Close Encounter' and being lost in the depth of Josephine's 'Old Soul Eyes', that I didn't correct her calling me Janie.  I took up my size 9 quilting between needle and started threading it when she said,  "Is that the smallest between you use?  Here use this thread."  We stitched in silence while Josephine finished the 'S' and I did my best at getting at least 10 stitches per inch with what I'm sure she thought was a fence post with a bullet hole for the eye.

All too soon, Alma  stood up and announced it was time to cover The Frames and reminded everyone that the Courthouse Stitchers would meet again next month same time, same place, and that the Courthouse would be open everyday for the LoneStar Bee members.  I must have looked confused because Josephine immediately explained that the guild was called The Courthouse Stitchers and the three frames...'A Frame', 'LoneStar Frame' and 'Texas Frame' were collectively 'The LoneStar Bees'.  She explained that I could come any day and did I have any questions?   Yes, just one.

What does the A stand for on the BlueHairs 'A Frame'?
Armadillos!

A also stands for ARLEE BIRD...Founder of the AtoZ April Blogging Challenge!!!
Thanks ARLEE!!!
Arlee's Blog....Tossing It Out
See Ya'll tomorrow for Letter B....Bluebonnet Lore
Posted by Sue McPeak at 4/01/2013

I never knew there was such a 'hierarchy' in the quilting world! I tried my hand in it for awhile, but didn't have the patience.

Great visuals in this little tidbit. Thanks so much for sharing.

I saw a stuffed Armadillo (A frame)in a fishing shop on Saturday and thought of my lovely Texas. Cute story.

What a fun story--while reading it I felt like I was right there with you!

I agree with Leslie—fun story!

I've always wanted to try my hand at quilting, but as I can barely thread a needle, I'm not sure I'd be too good at it!

Happy blogging, friend. I'll see you at the letter B!

Stitching their way to the Big A-Frame in the Sky - love that image! Substitute the activity and you can apply this to just about any organization: Methodist Women, Garden Club, Historical Society, Woman's Club. That first meeting always feels like a job interview.

This makes me want to watch "How to Make an American Quilt." Sounds like a bit of an adventure. I hope you enjoy the group.

Great story! I'm excited to read B.
Connie
I'm visiting from the A to Z Blog Challenge
Peanut Butter and Whine

I like the approach you're taking with the Challenge. Nice start.

Lee
Wrote By Rote
An A to Z Co-host blog