Stitching with Diane is like sitting around a poker table with George Carlin, General Patton, Mae West and Doc Holiday.  She's hilarious, a former Army Sargent, bawdy, brazen and blonde, and keeps everyone guessing as to whether she has an Ace up her sleeve or a six shooter in her lap.

Diane's a gregarious gal with an infectious laugh and a deep Southern drawl.  She is an expert seamstress, but is relatively new to quilting (keep this in mind).  As a newbie in the guild (but not new to quilting), I sit and stitch, nod and smile and pretty much keep my mouth shout...for now.  I am a little intimidated and a whole lot wary of any attempt to match stitches, stories or wit with these ladies...especially Diane.  Having a Poker Face came in handy today when she revealed the circumstances of her first marriage. 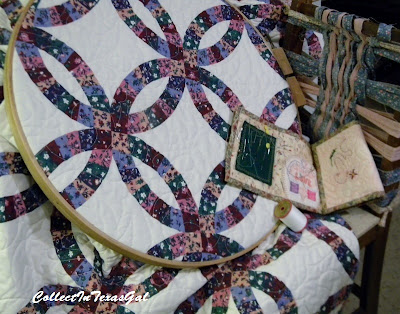 The whole thing started when Grace showed up with her Portable Hoop loaded with a Double Wedding Ring quilt.  She had a deadline to meet but didn't want to miss an afternoon of  social quilting, so she gathered up the hooped quilt and set it up in front of the LoneStar Frame where her usual 'Nest' sports an adjustable, padded chair and her quilting stuff.  I'm so coveting that chair.

"Have you done a Double Wedding....?", and before Grace could finish with ....Ring, Diane said, "Hell No!!!  Why would I want to marry  that lyin', cheatin' piece of  #%*>  twice?".  The Armadillos' blue haired heads snapped up from their bluebonnet hexagons, Alma and Flo's faces reflected the Blazing LoneStar, and  Josephine snapped that teeny #12 quilting between right into.

Grace quickly attempted to clarify with, "What I meant was......".  "I know what you meant, I might have been born at night, but it wasn't last night",  Diane shot back.  "The only thing Double at that weddin' was the Double Dealin' Groom."

Total SILENCE!!!!﻿
The Armadillos discreetly cleared their throats...in unison.  The BigHair Gals, gave each other the rolled eye look that said, "I bet", and Josephine gave me an all knowing wink....just before Diane 'busted' out laughin' with....

Oh Okay, It was a Double Weddin'!
I had Double Babes in my Belly and the Best Man held a Double Barrell Shotgun!
Total SILENCE!!!
Without missing a stitch and a nod toward Diane, Grace said
"That's exactly what I meant!"

The Double Wedding Ring Pattern...was first illustrated by Capper's Weekly of Topeka KS, in October 20, 1928.  It is said that a thoughtful groom conceived the idea of the double wedding ring ceremony.  The Bride commemorated the ceremony by working the two circles into a double wedding ring quilt.  It has been called "The Endless Chain or 'The Rainbow' and has been a popular pattern due to it's endless use of scraps in rainbow shades.  A tradtional Hope Chest pattern with newly engaged girls starting the piecing upon their engagement and finishing it for their wedding with quilting help from Family and Friends Quilting Bees.  It is also a meaningful gift for a couples Silver and or Golden Anniversary.  Still one of the most popular patterns today, this quilt is also one of the more difficult patterns to piece. 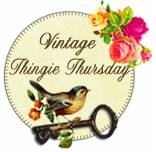 Good Afternoon Sue, What a fun story and you tell it so well....as I was reading it, I was thinking, oh dear, Grace had "put her foot in it", but after finishing reading, she had me smiling. I'm amazed she was so calm and did not flinch when she replied "That's exactly what I meant!"It sounded like an extract from The Persian Pickle Club.....fabulous.
Have a wonderful weekend.
Best wishes
Daphne

That's a very beautiful quilt and the story is one of the reasons why I don't stay where a group of women is. They often don't let one finish a sentence, hahaha.

LOL So funny! You tell a good story, friend. :)

I have a few different wedding ring quilts, but never knew this story. Enjoyed reading.

My grandmother was a quilter. She cranked out 4 or 5 a year. It was her quilts everyone asked about when she died. She had passed out many over the years, but had dozens still in her closets. Beautiful.

Dropping in from A to Z. This is my first year. I love it.

Popped by from AtoZ Challenge (and I am a regular reader also).

Hello! Terrific story. And I love the background about the double wedding ring pattern. October 20 is my birthday! Very cool to know something was invented on that day, LoL.

Happy A to Z-ing! from Laura Marcella @ Wavy Lines

I love double wedding ring quilts. I'm not sure I'm anywhere near ready to attempt something like this.

KC @ The Occasional Adventures of a Hermit & Oh Frog It

I'm loving these! This group of ladies is so much fun. Nice save there at the end.

OMG you need to sell this stuff to Hollywood! !!! I am so serious. The last quilting movie I watched...I probably watched 10x over the years..here you have another, loL

Can't get much more "double" than that! Fun story.