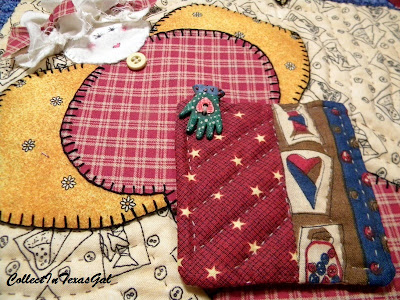 The minute I pulled into the parking lot I felt it...the boom reverberation. As soon as I stepped out of the car, I heard it...the boom boom beat and really loud strains of Petula Clark's 'DownTown'. It was coming from the Courthouse. The closer I got to the front door, the louder the clapping, whoop whoop's and 'You Go Girl' could be heard.

Vague memories of Richard Simmons' 'Sweatin To The Oldies' flashed across my mind. Noooo! Surely not!  But...it WAS...Richard Simmons!!!  Right there on the Big Screen TV that usually had *Alex Anderson videos promoting 'Quick Piecing Methods' rather than Richards Quick Step to the 'Right now Left'.

I stood there just inside the door watching in total awe at the four Armadillos sporting hot pink, head and wrist sweat bands, lime green lycra capris and 'Maxine' Tshirts that said, "You're never too OLD to HURT yourself doing something new".  They were doing their own thing to the music that looked alot like the Hokey Pokey!   I was wishing I had not left my phone in the car.  This scene would  go 'Viral' in a heart beat.  These women are Awesome!!!  And with that thought, I stepped into the Frame Chamber/Dance Hall and yelled over Petula's....You can always go downtown ...

What's Up, Rockettes!!!!
Alma grabbed the remote and pushed play, then forward, then rewind, play again, and finally PAUSE with a disgusted, "I hate these things, they never work right.  To answer your question....Oh my, Sue, I'm so sorry, I forgot to tell you that on every first Tuesday of the month we do our Heart Healthy Stitchin'.   You're not too late to join in....we were just warming up!"  After several seconds of button pushing and a couple of expletives, Richard resumed with Connie Francis' where the boys are.
During the cool down period everyone did a few slow stretches and then returned to their respective nests, comfy chairs, and stitching.  They continued to breathe deeply and every few stitches...flex their fingers and roll their shoulders...first forward then back.  All the while listening to each members presentation of 'Heart Healthy Tips'.
"I printed this off the internet", Alma began as she fussed with turning off the video. "The title is  Needlework and Health, and according to research done by the Harvard Institute for Mind and Body Medicine, the repetitive motion and focus of needlework can elicit what's known as the relaxation response.  Ya'll know that's a meditative state that slows the heart rate and causes blood pressure to drop."  Bea chimed in with, "Sure beats taking pills".   There were several other comments and some discussion and then everyone clapped and thanked Alma for the research she had done that completely confirmed what they already knew...from experience.
"Sue would you like to add anything?"  Alma surprised me with her question, since I hadn't a clue about this Monthly Heart Health event and wasn't prepared to participate. So I stalled with some stretching, shoulder and neck rolling, and finally came up with.  "Well, as we all know, smoking, is one of the biggest causes of heart attacks in both men and women, and 'Second Hand Smoke' is a real and present danger to Non-Smokers.  But did you know that it is also bad for Fabric and Quilts?"  Everyone nodded and 'Yepped' that they did, and a few Amen's were spoken.  I returned to my 'Heart Healthy Stitchin' as did everyone else...but Alma.

She disappeared into the Grand Jury Room, and after a few minutes returned with a sign that she hung on the nail over the Big Screen.  "Sue, your HHTip, reminded me that I forgot to put this sign back after The Marlboro Men met last month.  I would have left it up, except I was afraid they would strike a match to it."
﻿

*Alex Anderson...Host of TV's premier quilt show, Simply Quilts.  Her show ushered tens of thousands of new people into the world of quilting.  She is currently the co-host and executive producer of the The Quilt Show with Ricky Tims, an interactive website that features full production videos and connecting quilters worldwide.  Alex is the author of numerous Quilting Books and Videos.  Her expertise and teaching skills are sought after as a judge and teacher at International Quilt Shows and Guilds around the world.

See ya tomorrow for the Letter I....I Dunno, yet!
Sue to Josephine
If I stitch fast enough, does it count as aerobic exercise?
Posted by Sue McPeak at 4/09/2013

Ha ha ha! I forgot about Richard's Sweating to the Oldies!

Way to think quickly with your smoking add-in. Any chance that these dear ladies read your blog?!

You paint a great picture! I can just see this workout! LOL

You could write a short novella with all of these stories once you are done!

Connie Francis - oh my! Older than Petula Clark even!!

I love Alex Anderson. I bought one of her books and had her autograph it for my mom one Christmas.

Hahaha, that sign really made me laugh! It's great! I am going to do one like that and hang it at the dragon cave. I hate the smell to cigarette.

cool beans! I enjoy sweatin' to the oldies with Richard, he's a great guy.

Connie Francis and Richard Simmons and the ladies gotta love it!

Connie Francis and Richard Simmons and the ladies gotta love it!

Richard looks like he could be an inspiration to many. hehe