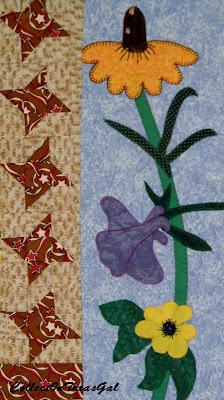 Once the Quilt Sandwich was mounted on the Frame, the BeeGals were ready for a walk through the Wildflowers.   A field near the cabin was lush with a Variety of Wildflowers that Texas Mother Nature had put together just for our enjoyment and for the picking.

Since we were on Alma's property, we could do just that.....pick bouquets.  I should mention that it's against the law to pick the Texas State Flower...the Bluebonnet...from someone's property without their consent...Tresspassing.  Also, it can be dangerous as the Diamondback Rattle Snake likes Bluebonnets, too.

There is such a Variety of Texas Wildflowers that they are grouped in ColorWays of Red, White/Green, Blue/Purple, Orange, Yellow, and Pink and are listed on the Wildflower Index website.

During the Spring Wildflower Bloom, Texans look forward to drives along the Wildflower Trails throughout the state.  Some years are better than others....depending on the amount of rain during the winter and early spring. 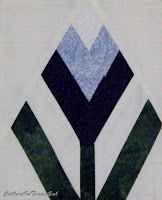 You may remember The Armadillo Sisters Irene and Bea's Bluebonnet story...Bluebonnet Lore...where their Mother was a spokesperson in favor of the Bluebonnet becoming the State Flower of Texas.  As the Texas State Flower, the Bluebonnet is a popular subject for painters, craftsman and of course quilters.

Josephine has both 'Appliqued Bluebonnets'...shown in UFO Retreat...and 'Pieced Bluebonnet's like the block shown here, in her Texas Our Texas Quilt.  Bluebonnet Fabrics are extremely popular with Texas Quilters and several of the major Quilt Shop Fabric Suppliers come out with a line of Texas Bluebonnet and Texas Prints yearly.


Oh, here come the BeeGals with their arms full of Wildflowers.
I'd better gather some vases and whip up a mixture of marigold oil, vinegar and water...they will be covered in ants...
the Wildflowers, hopefully not the BeeGals.

Love your quilting stories and the quilts are all wonderful !
As for the bluebonnets, there isn't a law against picking them. You just have to make sure you aren't trespassing ! oh and of course watch out for the snakes : )
(())

Thanks Leslie...I was thinking about the time I was photographing Bluebonnets on the roadside, when this guy across the road shouted from his business..."If you pick those Bluebonnets, I'm calling the LAW". Guess he owned that roadside!

I always watch out for the snakes!

Love wildflowers!Nice that you got to do two letters in one post. Also like that little concoction for the ants at the end. I don't suppose it works on chiggers?

Gee, only 3 letters left. I'll be sad to see your story end.

I'm going to miss these stories, too.

Hope you had a nice day, Sue.

yikes...camera w/long range lense 'cause I don't like me no snakes!

States are funny about the state flower. Virginia is finicky about the dogwood.

I wish we had more wildflowers but the California Poppy is blooming all around us and it will have to do. I hadn't heard the ant remedy but will have to give it a try.

Your quilt stories are marvelous!

Several years ago, I was fortunate enough to get to visit a couple of friends in Texas. It was September, so I missed the rush of spring color, but even in the dried and tired landscape of late summer, the goldenrods were gorgeous, and there were purple flowers that reminded me of our northern thistles, but these things made us bleed when we checked them out. We left The DFW area one day and drove south toward the hill country. Went as far as Fredericksburg and Luckenbach. Along the way, we stopped at Wildseed farms, and at a roadside rest bordering the LBJ ranch at the Perdenales River. I never before knew of the Ladybird's legacy with the wildflowers. And I so admire her for that. Great state. Wonderful people full of good hearts.

Hi Sue .. the photos and story lines are great to read .. and the tips - rattlers and ant remedies too ..

Sounds like a great hobby - full of fun .. cheers Hilary