I asked Alma if she would open the Grand Jury Room for me so I could get an idea of how I wanted to arrange the tables for the 'Painless Jane Class'...as it was now dubbed by the 'Stitchers'.  It was funny how their traditional quilting mindset had taken to the idea of quilting on the 'Rotary Cutting Edge' of technology.  But, that's a subject for later.  Right now I'm desperately seeking a plug...hopefully one with at least 20th Century wiring. 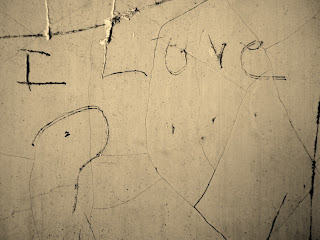 "Found it'", I announced to Alma who was on the other side of the room looking between the Stash Cabinets. "Oh, good, I was afraid we would have to get out the heavy duty extentsion cord from behind the big screen", Alma said as she made her way over to the questionable plug...question being did it work? "I hope we don't have to do that," I said as I flipped back the quilt that hid the plug. Alma lifted the quilt a little higher and exclaimed, "Would you look at that?"

With her free hand covering her mouth in surprise, Alma spoke as if she had seen a ghost, "I'd forgotten all about it.  My goodness, that brings back memories.  It was such a dilemma.  Mama insisted I choose one or the other, and Daddy said he didn't care, just as long as he could pay for everything without going into debt."

I could just envision Alma versing  Eenie Meenie Miney Mo  between her husband Sherm...a cross between Larry the Cable Guy and Toy Story's Woody...and well, anybody else.  "You poor thing, it must have been a heart breaking decision for a young girl in love with two guys," was all I could think of saying.  "Whaaaaat???  Two guys??  For cryin' out loud, I was only 12!!!!", and at that, she unlocked the door just to the right of the 'I Love ?'  and motioned for me to take a look inside. 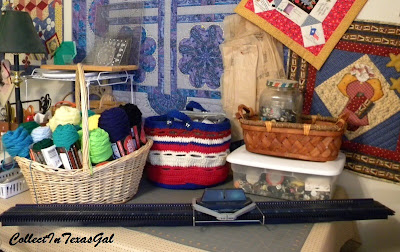 "My parents made me choose between Quilting and Knitting, cause they couldn't afford for me to do both."
As I looked around the room filled with baskets, bags and shelves of yarn and all of the gadgets, needles, books, and on and on,
I knew what the answer to my next question was bound to be.  Before I could ask it, Alma said,
"I chose KNITTING"
"But you are such an expert Quilter...like you have been quilting your whole life, and you're President of the Guild.
When did you start quilting?" was my stunned reply.
"When Sherm and I married."

Alma to Sue
Do you Knit?  We'd love to have you join The Courthouse Knitters Guild!
Sue to Alma
No ? about it,  I Love Knitting.  My husband calls me SueKnitWitty! 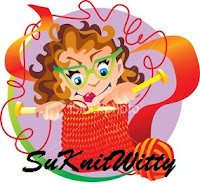 Sue....I see absolutely NO reason why I can't belong to both
The Courthouse Stitchers and The Courthouse Knitters.
Alma...Good, all the rest of us are!

Oh, what a great story! This one really made me laugh. I'm happy I'm visiting your blog early on a dreary morning. You made my day!

Thanks, Dana! You just made mine!!!

Moral of the story: Never limit yourself to just one (or 5) hobbies. Enjoy them all!

I think it's good to know more than one craft. I have learned crochet, mosaics, woodworking, and knitting and now I'm learning quilting. I can't say I'm an expert at any one craft, but I'm glad to know a little bit about many crafts.

From what I've seen of your work, Deborah, I'd say you are a Jack of Many Needleworks and a Master Knitter.

That was very cute! .....pick up your needles and join in!

Thanks Pondy...Absolutely, and if anyone needs a Needle, any Needle, let me know. I'd put my collection up against anyone...even Elizabeth Zimmerman!

Mother Dragon knits a lot. It's her passion.

Somehow, I sensed that about Mother Dragon. Would she like to join The Courthouse Knitting Guild? We would love to have her...just remind her about the 'No Smoking Sign' that hangs over the Big Screen!

I've never tried to pick up knitting OR crocheting but who knows....sometime in the next 40 years I may find time :)

I HAVE to tell you that I finally opened & used my Thread Heaven (bought upon your recommendation). HOW DID I EVER SEW ANYTHING BY HAND WITHOUT THIS?! Thank you Sue for the heads-up on this terrific product!

Have a terrific weekend!
Leslie

Leslie...I hope you will try Knitting and Crochet. They are both wonderful additions to ones Needlework Therapy...after you get the sometimes frustrating hang of it. Yep, Thread Heaven definately lives up to it's name. I'm glad I could help!

Knitting must be on the minds of many today it was my theme! great minds that you added it to your fabulous story..

I'm glad you liked the Knitting story, Jen. It was a natural subject for me to pick for the Letter K. I do love Knitting, although I'm not as versed in it as I am in crochet and quilting, and a drawer full of socks without mates is a testament to not being able to knit more than one of anything.


So loved this story! Finally able to stop by and see what you've been up to my friend.

My son lives in Yoakum TX. Is that near you?

I'm so glad to see you Leann, and I hope Spring has sprung at the Parsonage. Fun story huh....glad you enjoyed it. Yoakum is not near! In fact it's FarFarAway near Houston. San Angelo is on the edge of West Texas between Abilene and Nowhere! LOL!!! Come see me!!!

Hi Sue,
Thanks for your many visits, and what a nice surprise to see my blog in you sidebar! That's quite the honor and I appreciate it very much.

I'm a knitter, though both my grandmothers made sure I learned ALL the needle crafts. I've gone through "stages" where I've favored some over others...but at this point, knitting wins. It's therapeutic for me, and giving a handmade present that took hours and hours is a true gift of love, as I'm sure you know as a quilter.

I do COLLECT antique quilts. I've also received some awesome ones as baby gifts for my boys and since they're 13 and 16, they're in "suck the air out" storage ;-)

Tina...I've enjoyed your Blog and the stories of your 'Coming to America'. Thanks so much for the work you have done as Hostess...glad I'm in your group.

A fellow knitter...neat! Yes, those handmade gifts are very special. I'm not surprised you knit. It's very big in Sweden, and I'm sure you have heard of Elizabeth Zimmerman. I think she's going to be my Letter Z.

A fellow vintage quilt collect, too. It just keeps getting better.

Thanks for your visit. I appreciate it very much.

I had to scratch my head a couple times...but I finally got it! Color me dense! :)

HaHa DL...it's kind of like guys making a choice between Baseball and golf. I tell HiHoney...my husband...do both. He tells me the same, so I add crochet, needlepoint, embroidery etc etc. He won't know the difference...they all require a needle and string. LOL!!!

You have such a happy cheery blog. I almost want to knit something. Almost.

My stash covers the table behind me but there are a skein or two of yarn next to my computer. You can do it all, maybe not in a timely fashion but they are there to enjoy. Loved the story.