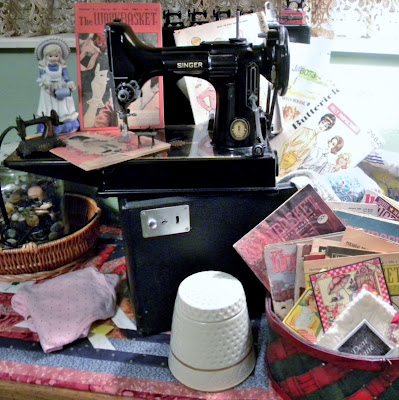 Before I take off for today's quilting at the Courthouse, I have to tell you why Modern Day Quilters, like Cheryl and I, wish for one, covet our neighbors' Featherweight, and think of them as Modern Marvels.

A Singer Featherweight was, is, and always will be the most reliable sewing machine ever made.  Made from the mid-1930's until the early 1960's, this machine was light as a feather (in comparison to it's counterparts) weighing only 11 pounds, and was then and still is, known for it's perfect stitch, simple mechanism, portability, and no matter what condition found in...will always work.  Between 1948 and 1959 there were 1,055,326 Featherweights manufactured.  You would think that would mean there would be plenty of them out there for Featherweight Collectors of today to find.  Not So!!!!

I have TWO...I know, I should feel bad knowing that Cheryl has none, but I don't...sorry Cheryl.  My road to ownership was long, arduous and the cause of  my first bout of *Syncope (pronounced Sin-ko-pee).  (be forewarned, especially if you are seeking a Featherweight...the following Journal entries may bring on a bout of Syncope)... read at your own risk...just sayin'. 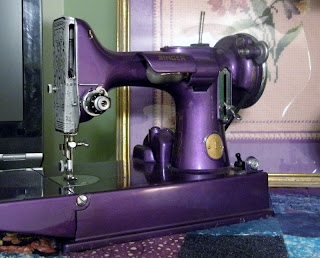 Oct. 24-26,1998...Dear Quilt Diary...here it is the last day of the Houston Quilt Festival. I swear I have seen every one of the 1,000 quilts on display, including the award winners of $67,500 in prize money.  I have visited everyone of the 725 Vendor Booths, and finally found the Featherweight Booth #725...wouldn't you know.  Unfortunately, the only ones who could afford to buy one would have been among the Blue Ribbon winners with their share of the $67,500...I was not one.  The least expensive Featherweight was $425.00, and the most expensive was the 'Century Edition' of which only 100 were made...$1,200.00.  Needless to say I'm still without a Featherweight.

April 15, 1999...Dear Quilt Diary...Today I did something I've never done before...I went to a Pawn Shop.  I'd heard stories about **Pawn Shop Shysters and always steered clear of those places, but a friend told me this one was reputable, and I needed to find a used sewing machine.  Anyway, to make a long story short...there were no sewing machines on the shelves, so I asked the young man if they ever had any come in for sale.  He said there was one in the back, but it was really old, really dirty, probably didn't work, and not worth my time.  "I'll take a look at it.  It might clean up and won't cost too much to fix", was my reply.   "It's in a Black Box in the back, I'll see if I can find it", and off he went.

Black Box!!! I started hyper-ventilating!!!
He came out with THE Black Box....a Featherweight Case!!!
I asked for a paper bag!!!  When I recovered, I nonchalantly said,
"Oh Yuck, it really is nasty, and like you said, probably doesn't work.  How much do you want for it?"
He scratched his head and came up with, "How about 80 bucks?".
I began to feel lightheaded, but knew that Pawn Shopper's were expected to say, "Is that the best you can do?"
He rolled his eyes and said, "Oh, okay, it's been here forever, I need the cash....you can have it for $60."
I Syncopeed!!!

*Syncope...a sudden, brief loss of consciousness and posture caused by decreased blood flow to the brain.  Commonly known as fainting.
PS...Dear Quilt Diary....I almost forgot.  After a good cleaning and oiling, she worked perfectly....just like I knew she would.  I looked up the Serial Number...just curious as to her age...she's a Century Edition.  Am writing this while blowing in a paper bag....I feel faint.

PPS....Dear Readers....I don't want you to leave thinking I don't empathize with Cheryl over not having a Featherweight in her collection of Vintage Sewing Machines...I do.  Cheryl does most of her piecing on her Hand Crank and Treadle machines.  I Covet her RedEye, so in a way we are even.  She has graciously invited us over to Cheryl's Teapots2Quilting Blog for a look at a FEW of her Modern Marvels...in their day.  While there you will be treated to a 'Quilt Show'....don't miss the 'Dear Jane' entry in this show.  If you need a reminder about the Dear Jane quilt....my Letter J post...No Pain~No Jane.﻿
Oh, I almost forgot....Alma has promised an Interview about the Grand Jury Room Featherweights.
**My appologies to Pawn Shop Owners...no offense meant...keep in mind this was before I knew about
Rick, The Old Man, Big Hoss and Chumley on "Pawn Stars".
See ya tomorrow for the Letter N.
Posted by Sue McPeak at 4/15/2013

Brilliant bargaining. Those old machines do just keep going and going, don't they?

I have an old sewing machine that I picked up in it's original case (w/some other "stuff" in there too) from Goodwill a few years ago. I have it as a decoration (I adore vintage) and someday, when my children are out of the house (That's going to happen, right? Please tell me it is!) I plan to have a sewing room and it will go in there.

So, I rushed to the sun room where the sewing machine lives and looked for the model number and then Googled it--it's a Model 221 featherweight! I have no idea if it runs as I am perfectly happy with my circa 1960's Sears Kenmore sewing machine.

I can always count on your stories for a smile. "I Syncopeed!!!" — Love this!

I do not sew (I just typed 'I am not a sewer' but that didn't sound quite right!), but can appreciate a good deal, especially on something vintage. I would have the same reaction if I found a 19th century valentine made by a few U.S. companies. Great story!

Now I know to keep an eye out for those featherweight machines - esp. the ones in purple!

Sue, what a wonderful story! I absolutely love my Featherweight. It was a gift from my older sister and it sat in a closet for six years before I used it. I didn't realize how fine a Featherweight would sew, and now I regret wasting six years. HA! I wouldn't take anything for it! Thanks for the great story.

I love this post, although I don't sew. I have a friend who does, however. I cannot wait to show her your fabulous entry today!!! jean yates

And look at that gorgeous purple machine! Wow, wow, wow! That'd inspire great pieces just to look at it :-)

Rinelle...Yes, they do. That's one thing you can depend on. With good mainteance they will outlast and out sew anything on the market today.

Leslie...OH MY WORD is right...I may Senkope right here and now. How much do you want for that ole thing on your porch? LOL!!!

Dawn...LOL!!! I am a sewer and somehow that's just wrong. A vintage valentine collector...very sweet...get it!!!

Tami...I wondered who would say something about the 'Purple One'!!! That 'Lil O Plum' was black when I got her. The former owner had used her hard and put her up wet. I had her re-dressed in that pretty purple.

Deborah...After 6 years in the closet, I bet that baby was ready to sew up a storm. That's a good long rest. What a sweet sister!

Missy...LOL!!! You go girl. I still go once in awhile, but have never found another sewing machine or anything else worth synkopeeing over.

Jean...Doesn't this story want to make you sew. Your friend will know exactly what I'm talking about.

Leese...I know, isn't that a gorgeous purple. She not only 'Looks Good' she 'Sew's Good', too.

Thanks for the link up. Can't wait until we find out what Alma says about all those Featherweights.

My grandmother used to have a sewing machine like that black one with the gold trim. My mother always wanted it - LOL!

Hey you reminded me of my old sewing machine. My grandfather, granny and mom did a lot of stitching. I will ask her if she has it still! Ah some nostalgia :)
http://annucool15.blogspot.in/

The Mama still has her Singer treadle machine. It's what I learned to sew on. I love it. All it needs is a bit of cleaning and it would run good as new.

I appreciate your visit yesterday. :-)
Don't be a Hippie
Take 25 to Hollister

I have my great-grandmother's RedEye, and I have my mom's ol' Viking that just pre-dated the computerized machines. She traded a Singer for it. Wish I had that Singer back!

I have a friend with two featherweights and she won't share. What an extraordinary find. I guess I will need to hit my local pawn shop. They are great machines!

I am glad you got it! Love that Pawn Shop story!

too bad someone in the sewing machine business doesn't figure out exactly how those machines were made ( to be so reliable and to stitch so nicely ) and just start to reproduce them ! :)