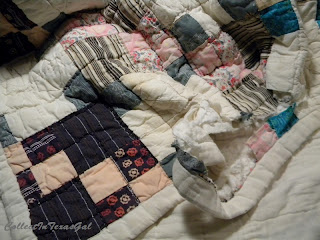 Every night after the cowboys had been fed and the chuckwagon readied for the next morning, my grandmother would stitch together the pieces she had carefully packed in her sewing basket.  Her nightly routine of nesting around the campfire had become the drovers and wranglers evening gathering place as well.  It was like being at home, and for most of them, memories of home included a mother or wife who stitched at the end of a hard days work.

It's my third day in a row at the Courthouse Chamber.  I feel like the cowboys in Sudie's story....all warm and fuzzy with home and hearth in my heart.  I know that sounds kinda sappy, but it is the only way to describe how this place and these women have become such an important part of my day.

When I arrived today, dragging my Quilt Bag stuffed with a newly made padded cushion that fit the assigned folding chair, The Armadillo Squad was gathered around Sudie and an old quilt...and I mean old as in frayed binding, worn thin calicos and clumped cotton batting that had settled within the quilted pieces after many washings and many days and nights of being tucked between bedsprings and mattress.  It was obvious that the quilt was special to Sudie, who was pointing out a block in the middle of the quilt, "This here block is stained with my Granddaddy Chaps blood." You could hear a pin drop as we all collectively uttered, "Oh my, Sudie, how did that happen?"  Sudie motioned for us all to have a seat as she settled in her chair with the tattered and blood stained quilt draped across her lap.

As I was telling you earlier, Grandmother MaryJo stitched every night around the campfire on what was to be their last cattle drive on the Chisolm Trail.   It wasn't common for a woman to be on a cattle drive, but 'Jo', as she was called by the cowboys, was as much a drover and wrangler as she was a chuckwagon cook.  She had been on the Chisolm Trail many times with her Daddy, my GreatGrandpa John.  He was a Trail Boss who was entrusted by other ranchers to drive herds of Texas Longhorns to market in Abilene, Kansas.  You see, it was just after the Civil War when cattle in Texas were plentiful and sold for four dollars a head.  In the North and East folks would pay forty dollars a head ... making the 'Drive' on the Chisolm Trail worth the time it took, and the dangers encountered along the way. 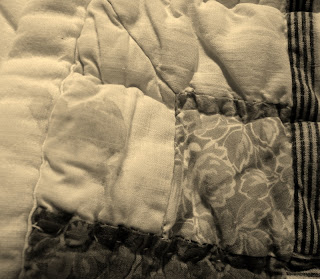 Sudie rearranged the quilt in her lap so we could better see the piece with 'Chap's Blood Stain', and continued with her story.....

.....Lordy, I got off the subject a bit.  Anyways, this here material was the shirt MaryJo was wearing the day she held her bleeding husband next to her bosom.  She pieced it into this quilt so as to never forget that day and their last 'Cattle Drive on The Chisolm Trail.

With that, Sudie rolled up the quilt, rose from her chair and declared it time for the Armadillos to get back to quilting on Bea and Irene's Bluebonnet Flower Garden.  We all sat glued to our chairs, our mouths agape with the questions we all blurted out at once.  "Wait, Sudie!  Did Chap get shot?  Was it Indians?  It was Rustlers, wasn't it?  Oh my, was it a stampede?"

"Goodness what imaginations you gals have, Sudie laughed.  Jo's bosom was pressed against Chaps ear after he yelled....

Damnit, Jo, you dang near cut off my ear.  Give me that razor, I'll shave myself." 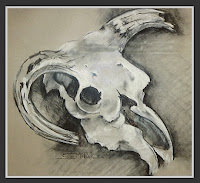 The Chisolm Trail was a trail used in the late 19th century to drive cattle overland from ranches in Texas to Kansas railheads.  The portion of the trail marked by Jesse Chisolm went from his southern trading post near the Red River, to his northern trading post near Kansas City, Kansas.  Texas ranchers using the Chisholm Trail started on the route from either the Rio Grande or San Antonio, Texas and went to the railhead of the Kansas Pacific Railway in Abilene, Kansas, where the cattle would be sold and shipped eastward.  Reference: Chisolm Trail ~ Wikipedia

Lovely to meet you! I'm new to the site, having just discovered it via the a to z challenge but I love the warmth expressed in this piece. I know very little about my ancestors and the family members I do know about don't have such a rish history so this was a nice step into the past.

If you want to stop by and spread the love i'm over at http://bev-thebevelededge.blogspot.com/

And i'll definitely be by later in the month to catch up on all the quilting stories!

Hahaha! What an unexpected turn of the story. I was almost seeing a tragedy come. Indeed women with razors were dangerous. :)

Sue, I enjoy reading your stories. I love how you set up your A to Z posts and look forward to reading them every day. ☺

Great twist at the end of this story! I didn't see that coming. :)

What a great post. Quilts surely do contain a lot of history, personal and otherwise.

I love quilts! I have my grandmother's quilt on my bed right now. Such memories ...

Great blog! Visiting from A to Z!

You have amazed me once again!
I love your stories...LOVE! jean

What wonderful story telling and I love your quilts. I'm a newbie quilter and have been keenly searching for likeminded people on this A to Z Challenge.

What a great story. I love cross-stitching on a winter's night. I can't imagine having the energy after driving cattle all day or cooking over an open fire for a bunch of drovers.

I'm glad you have a cushion for the quilting bee - you needed something soft to fall back on after that surprise ending.

I love your A to Z theme and your stories! It'd be fun pinning some on my Western Style board on Pinterest...

How funny! It seems to me that both you and Sudie are great storytellers. :)

I am going back through your challenge posts now. I found your blog toward the middle of the challenge, I believe, and I have to see what I missed before I got here. :)

Have a blessed Mother's Day!