Your only assignment for this week in the sewalong is to pick out your fabrics. 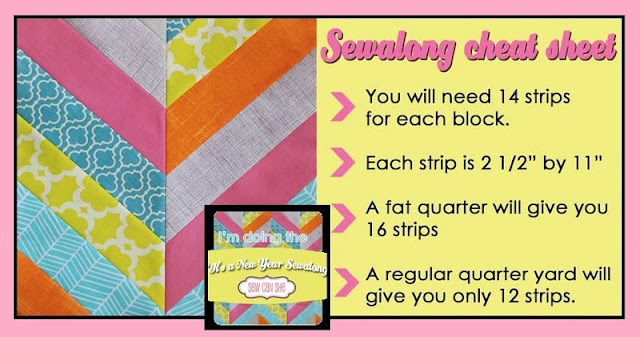 I was glad to see the cheat sheet before I began pulling out fabrics from my stash, photographing and posting on Facebook my choices for this...my First Internet SewAlong.  Yep, I had already thrown open the curtain covering the shelves that house my Fabric Stash and was contemplating which BOLTS to pull when I saw the word FAT QUARTER.
Okay, I can CUT Fat Quarters off the Bolts....It won't be easy though!
I've known and petted some of these Bolts longer than I've known my youngest grandson...he's three. 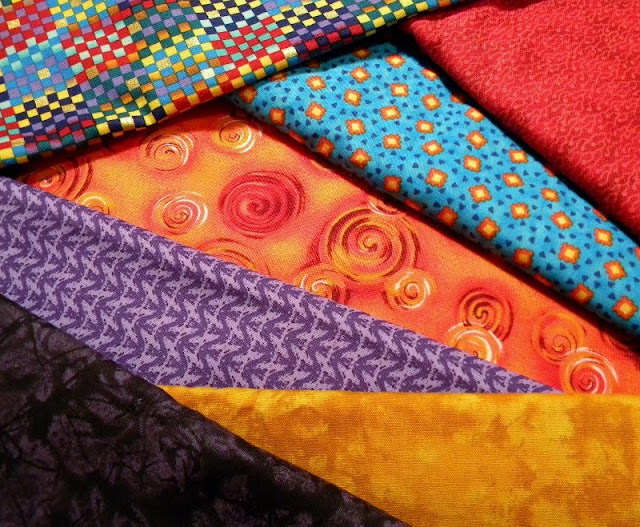 For instance, the Focus Fabric for this Group is from a Bolt of Fabric by designer Michael Miller.  It's called 'Aztec' and I've been hoarding saving it for at least nine years....probably more like ten, but who's counting!  I must admit to only having ONE yard of it left.  What was I thinking selling all but this ONE yard.  I should have kept at least THREE...Five would have been better.

You can't really tell that a couple of these are NOT Fat Quarters, can you?
I tried to arrange them so the Bolts weren't obvious.
I'm working on my 'Parting with Yardage' issues.
I am sure Caroline of Sew Can She, is not expecting this New Years SewAlong to turn into
SewAlong PsychoAnalysis 101 2013.
﻿ 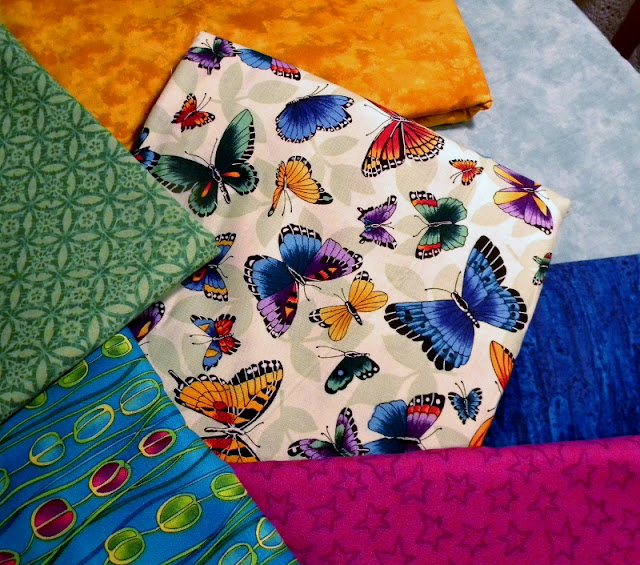 ﻿ In her introduction, Caroline, who BTW is the coordinator for this SewAlong, showed TWO Groups of fabrics she plans to use.  So while I was at it...pulling Bolts Fat Quarters...I came across another couple of yards of this Focus Butterfly Fabric.  It's going to be really hard to 'Part' with, but won't it be stunning with these other Stashed Fabrics?  Since all I'm doing this week is selecting fabrics, I'm not Totally Committed to having to CUT anything into FQ's or Strips.
I'm OKAY with that...it gives me some time to get use to the idea of being Committed....To Cutting, of course!
If you would like to know more about The New Year SewAlong here are the links:
Caroline's Introduction on Sew Can She
The Sew Can She 'It's A New Year SewAlong on FACEBOOK
To show my Committment to 'Parting with Yardage'... I'm having a
New Years SewAlong GiveAway
It includes

A Bolt FAT QUARTER Bundle of
The Butterfly Bundle...7 FQ's
The Aztec Bundle...7 FQ's
There will be TWO Winners...Enter GiveAway by:
Leave a Committ Comment On THIS Post...with your Blog URL
Be a CollectInTexas Gal Follower
Winners Announced on January 29th
Happy New Year Sewing!
Posted by Sue McPeak at 1/04/2013

What a great idea Sue! I'm going to share it on fb. What a funny post, too.

Aweomse idea!!! I would LOVE to win!!

Thank you for the chance at winning that fabric is beautiful!!

Such lovely fabric! It's a hard thing, parting with yardage. However, if I should win, I know an almost 3yrold grandchild who would be getting a pieced stuffed hound dog for her birthday this spring.
http://hedgehogwolverine.blogspot.com/

This is so funny. Reminds ms of me... So that is why I would love to win this beautiful fabric.

What a great idea - I would love to win either of these wonderful collections! Thanks.

I've just started sewing and quilting and I'm totally fascinated with fabric and color. These fabrics are beautiful. Loved the blog post too.

I've just started sewing and quilting and I'm totally fascinated with fabric and color. These fabrics are beautiful. Loved the blog post too.

I can't wait to see how everyone's squares turn out.
I blog at: www.sunshinesews.blogspot.com

I would be thrilled to win either of these collections.

Nothing better then fabric for the New Year and a sewalong. Count me in.
www.stitchesonmyneedle.blogspot.com

I'm a follower AND I am going to commit to the sew-along over at Sew Can She. Can't wait until naptime so I can start looking at my fabric stash!

Okay,,I'll have to commit for sure, I was a maybe but this is a great giveaway..wonderful post. I blog at http://babesandbridesblogspot.com Thank you!!

oh Sue either of these bundles are delightful, full of energy. http://lalaslovelys.blogspot.ca

i am definitely following all your wonderful posts.

I love the butterfly material! Just think of it this way, when you cut your yardage, you will still have it, it will just be in a quilt to be enjoyed whether than on a shelf!
I already follow you and my blog is missyscakesandaprons.blogspot.com
missysaprons@gmail.com

Super fun! I'm committed to the sew a long this year too!
www.roseandodin.blogspot.com

following...I had just read all the details on this sew a long,, cool , we were bound to meet..

Lovely color choices, wish I could say pull the bolt !

Pretty colors!! Love the butterfly group. Thank you for the chance to win..

First time visitor to your blog. Looks great. Thanks for the chance to win.

I love your fabric choices.I am starting to get inspired to particpate with this sew along. I am just reentering the sew world and rebuilding my fabric stores after a rough marriage and divorce. This may be just what I need to jumpstart things...

What a funny post! Really enjoyed it. Thanks for the chance to win.

What pretty, cheerful fabric to see every day during the death of winter.

Love your fabric choices. I'd consider myself lucky to add to my stash.

I love fabric too - maybe change the term to Fabric Connoisseur!

What beautiful colors! I hope to be able to color coordinate better as I look at other's choices. Thank you for the tip on how to choose fabrics that go together!

Your colour scheme choices are beautiful,
all colour cordinated perfectly.
This is my first time visiting your blog and am very impressed.

Oh My! I just love that orange in the Aztec bundle. The lovely circles on it. Great color combo's you chose in both groups. Fun and bright, just what you need after a good snow (which we haven't had yet).

Hi Sue, The Sew Along Project is intriguing. Your fabric is lovely. I used to have more of a stash than I have now. At one point I gave all my fabric away. Such a foolish thing to do. I was moving and we do the unexpected when we are packing a ton of stuff.

Thanks for the chance to win, the fabrics are beautiful!!

Lovey fabrics! Thank you for the competition and the encouraging words on my blog :)

Just found your blog, I love it when I come across someone who can actually write and have a funtastic time doing so.
I used to write like that, but some folks took me literally.. :P
http://quiltsnsewing.blogspot.com/

Thank you for the lovely fabric. I am so excited that I won! It's so pretty, I cannot wait to use it. I wrote about it here: http://sunshinesews.blogspot.com/2013/02/collectin-texas-gals-giveaway-i-won.html