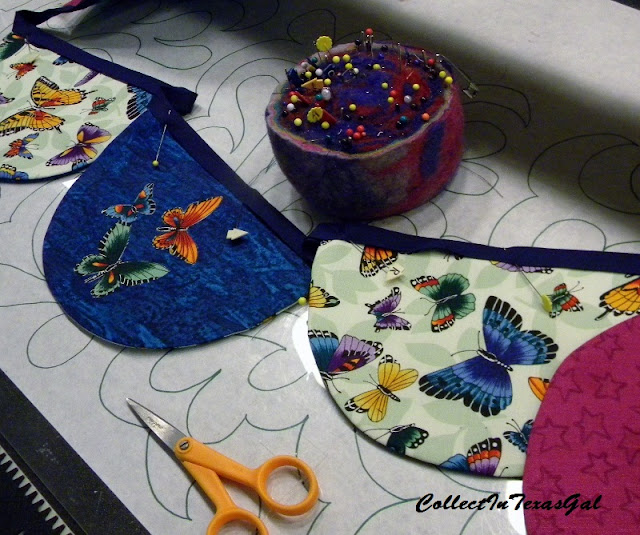 There's not many piecing skills I haven't tried.  I'm pretty much a whiz with the straight line cutting and stitchin so long as I can cut with a Rotary Cutter and Ruler and stitch with The Quarter Inch Foot.  It is well known that many piecers suffer from CurvItisNegative Disorder, and I'm not an exception.  I've been tested.  The patch test came back Positive and I failed the Concave/Convex Visual...it was so confusing.  I've always prided myself with my scissor snipping skills, but I was a disaster with curves...I notched when I should have clipped or was it visa versa.  Anyway,  after that first attempt at curves....drunkards path block....now I understand why it's called that...you need a few slugs under your belt to go down that notched path.  As I was saying, after that first try, I just moved on and stayed on the Straight and Narrow Rotary/Ruler Path.  Until now! 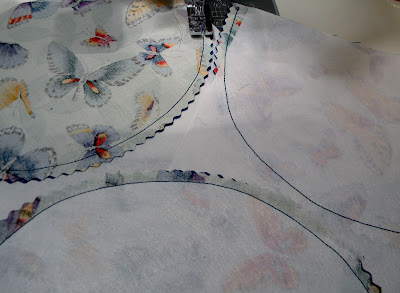 Just look at this curved stitching. It's Easy Peasy! That's what Rachel at Stitched In Color says about the first project in The Curves Class that I'm taking...over the internet...how curvey cool is that!!!

I'm all over this curve cutting and sewing since Rachel explained the difference between Concave and Convex and best of all there is NO Notching or Clipping.

You gotta know about this cure for CurvItis Disorder...it's a 'Rotary Cutter PINKING Blade'. It sure made The Scallop Bunting Project a Quick N Easy Peasy project.

Thanks Rachel for the great instructions and step by step pictures. I did add one thing...'tear away stablizer'.  Oh, and one more thing I added...Seven Bunts instead of Six.  They are called Bunts, right? 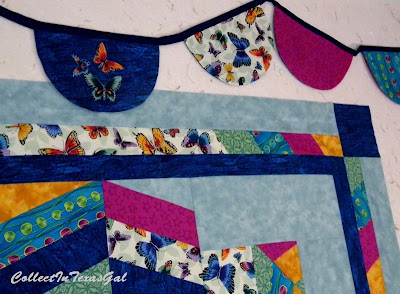 I decided to make the Scalloped Bunting Project to go with another Internet Sewing Event... 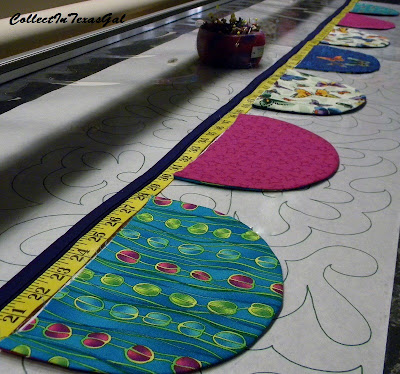 The New Year SewAlong which I'm not ready to show just yet.
In order for the Bunting to go with the quilt, I needed to use a few more fabrics and it was
necessary...no...imperative that it balance and match.
You see I also have a Genetic disorder....CS-MMb....you can get the scoop on that HERE. 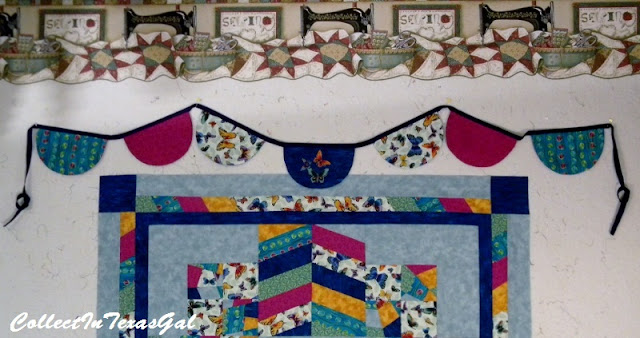 Here's my Finished NoNotched EasyPeasy Butterfly Bunting
on the Design Wall...and a peek at the New Year SewAlong UnFinished Quilt Top.
And just think...I did it all without a Single Drunkards Path Slug under my belt!
Have Pinking Blade...CanDo Curves!!!
Posted by Sue McPeak at 1/15/2013

I've been telling my husband that I wanted a pinking blade for my rotary cutter, it will be great for when I'm sewing garments too. I love your butterfly material!

Rachel at Stitched in Color said...

Haha, so glad you're having such curve-success! Your bunting turned out lovely.

That is really cute bunting. I've never seen round bunting before, but I like it.

That is so pretty - but waaaaaay beyond my skill level!

You are one talented lady! Love your finished treasure!