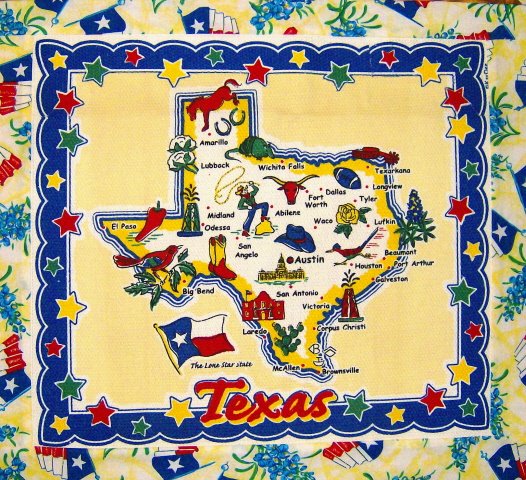 
Friendship
The State Motto of Texas

Does Your State have a Motto?
I bet it does and you can find out HERE. 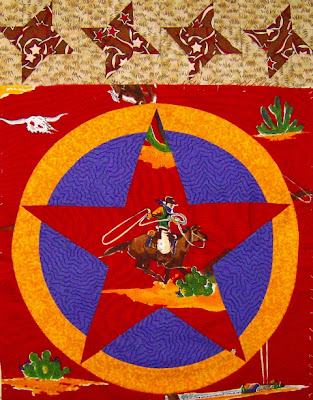 Texas is also known as the Lone Star State in reference to the Texas State Flag. The flag displays a single, five-point white star on a field of blue with an upper white horizontal stripe and a lower red horizontal stripe.

As seen in this quilt block, the Texas Lone Star is the Symbol found on everything from Lone Star Beer to....well, my 'Work In Forever Progress' Texas My Texas Quilt!

The Texas Ranger Star is a 'Pieced Block' that represents the Texas Rangers Badge.  For those of you who are not qulters...pieced means each piece is sewn together with inset seaming...this one done on the machine...yikes...no wonder it's still a WIP.

The row of Four Stars across the top are Pieced Friendship Star Blocks to represent Texas as the Friendship State.  Ya know...there's more F words in Texas than I realized.

Now, I'm going to show Ya'll one more Block of my WIP Texas Quilt, and then I'm going to save the rest for the Letter Q....maybe I'll have it put together by then...or Not!  Anyway, about this block.  First of all it represents the Texas State Bird...The Mockingbird.. and it is Appliqued.  Which means that the pieces are cutout, layered on top of a background and stitched down.  The row under the Mockingbirds represent the Mountains of Texas and are pieced.  Yep, we do have Mountains in Texas...some here in West Texas called the Davis Mountains around Fort Davis...there ya go another Letter F in Texas. 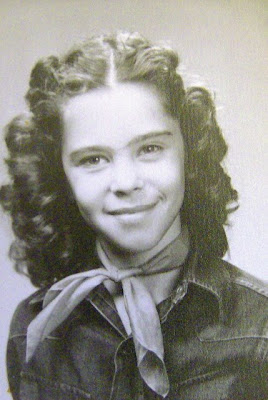 
My Mama was an Iowa Farm Gal and my Daddy a...
Fourth Generation Texan.
That makes me a
Fifth Generation  GRIT

So that Ya'll  know I'm truly a GRIT with a Friendly Smile and  Good Texas Gal Manners....'Know when to ShutUp'...I'm going to turn this Letter F Thingie over to Jenny Shugar and the Friendliest Bunch of Bloggers in Blogland.

More of The Letter F
Thanks Ya'll for Your Friendship!

PS...About this GRIT in the picture above...

3rd Grade Sherman, Texas...Mama gave me a TIGHT perm so my Haairr would look purty for school pictures...cried all the way to school, but managed a smile for the camera.
My Mama said, "Luv yer haairrr, Hunny."
My Daddy said, "Darlin, Yore mighty Purty in that Red Bandana and Cowgirl Shirt."
I said, "Whaaaaaaa!!!"

Texas is a friendly state! Come to think of it, I've always felt right at home whenever I've visited. Thanks, Sugar!

Texas is a very friendly state! :)

I really did find Texas so friendly when I last visited!

With friendly Texas blood running through my veins, you know I loved this post!!

Erm... I've never been to Texas, sorry :(
I totally admire your quilting. I am rubbish with a needle and cotton.

I have such fond memories of Texas! :)

I lived a year in Texas. It sort of feels like a country on its own because its so different. I remember they used to say: everything is bigger and better in Texas. The men were so tall and handsome and masculine...I loved how everybody used to call me honey or darling. After a while I started picking up some of the expressions. I just sounded funny with a French accent. LOL Following you with Alphabe-Thursday!

Oh, I think you look so cute in your picture. :-) I always wanted a cool Texas accent like that when I was growing up. I thought it would be so cool to live there, however, after reading the list of "don't dos" I think I just wouldn't fit in.
Great post!
p.s. My mom quilts a lot, so I know how hard it is to make the squares like the ones you shared above. Good job.

I don't live in the states but thanks for the link anyway. That was interesting . I wonder what the motto for Calgary is? Hey it's close to texas what with the greatest outdoor show on earth , we have stampede and that's about all I can take of the cowboy :p I would love to see the rest of your quilt when it's done. Those birds were nice .

LOVE Texas! Looking forward to the finished quilt by Q :-) I'm a Southern Girl, GRITS also stands for Girl raised in the South!

Great post! I have never been to USA but Texas does sound appealing.

LOL...I had one of those "tight" perms when I was little and remember crying my eyes out. I hated it. You never give a girl with naturally wavy hair a perm!

I have to agree with your Mom and Dad. You did look purdy and I love your hair! LOL!

The quilt will be so lovely when it's finished. I admire anyone who has skills to make a quilt and especially one so unique.

I have always met wonderful people in Texas. I love the friendship quilt pieces you shared.

Cute post!
My only Texas experience was many years ago when we were posted on exchange in Oklahoma and took a holiday through San Antonio and down to Galveston. I do remember that the people were very friendly and kind - especially when they saw that we were traveling with a baby!

HAHAHAHA! I love this! Especially the good manners!!

I love your school picture! That is such a cute story. I would love to make a quilt, but I haven't had the courage to try it yet. Yours looks so beautiful!

I never knew that Texas was the Friendship State. Learn something new everyday! Of course, I've never been to Texas....maybe one day. My husband has some friends who moved out there for work so maybe we'll visit them too :) By the way, I'm from California and according to that link you shared, our motto is "Eureka"....sounds so dorky. I prefer Texas's motto of Friendship instead :)

Everything looks so nice. That quilting is lovely. I also like to look at other peoples school pictures but I actually think you looked very pretty. Nice post.

Aw...I love friendly Texans! You are filled with fun facts about your fabulous state! HeeHee! I like F words! Anne

I do believe you Texans may indeed be the friendliest! Your post was very fun to read, shugar. :)

Wonderful post on FRIENDSHIP and Texan Tales! Very cute picture of you as well! Love it! Also...thanks for the comment on my French Poodle; you gave me quite a chuckle!
Happy F Day!
Coralie

looks like I better make some friends in Texas and come to visit. I like polite friendly places

Never been but I'd love to visit!

Shuga' pie Sue, you sure made me smile! Fabulous and Friendly post. And isn't it Fascinating how as youngsters we Feel mortified about our looks. My hair is naturally much curlier than your perm, and curls were just NOT the thing to have when I was 15-16, so one time my girlfriends put my head on an ironing board and Flattened my hair... I looked like a scarecrow! :-D

"Drinking straight outta the can"

I presume you mean soda can?

Thanks. Now I'm upon on all things Texas. (My cousin, who lives near Dallas, would appreciate that.)

She does love her state!

You were only in third grade in that picture? Wow! I wrote about friendship too for my F post. I had a slightly different take on it though! LOL

I'm a GRITS girl myself shuga...Girl Raised in the South, but I do love Texas and all that it stands for! Love your blog!~Ames

I learned something...I have lived here for 29 years..."Nothing without Providence" I wonder why that is the motto for Colorado. I might have to grab the girls and do some research! And yes Texans are generally friendly people...but so are Coloradans.

Hi Sue, yep, I am still alive and kickin'. the camera club five day hoop la was a blast. AND, exhausting but a great time was had by all.

Yesterday all of my sisters were here to have a belated birthday celebration. MINE! We took off to a far place with lots of outlet stores, had lunch and a wonderful day. Now I am trying to catch up with my visiting and writing my Pink Sat. post.

I always love your Texas history and your Texas quilt is going to be wonderful. I need to get back to mine. I still have a couple of months to accomplish my goal. I need a couple of years. Boy, My quilt project is a difficult one. sigh! You knew that huh? I am not an experienced quilter. But I will plug along.

I think your photo is adorable. My mom gave us perms too. Once my older sister hated it so much she stuck her head under the bath tub faucet. Getting your hair wet in less than a week was a no no. I learned sooooo much from my older sister. NEVER mess with mom. Kinda like "Don't mess with Texas!!!" HA!

Have a wonderful day.
Hugs, Jeanne

I added myself to follow your blog. You are more than welcome to visit mine and become a follower if you want to.

I love the quilt. That is an amazing talent. It is one of those I would like to learn to do someday.
THanks for this 'f' post with all the great info about Texas as well!

I have never been to Texas. I would love to visit one day! (I left a comment on another post. But I wanted to see your F-post.) Friendship is such a good F-word!
Thank you for visitng my meager F-post. I have revised it and invite you to come back whenever you have the time.
Best wishes,
Anna
P.S.
I love quilts too.
Anna's Alphabe-Thursday-F: REVISED!!!

Shugar,
I'm smiling out loud over this post! How warm and Friendly!
great perm story
liked the manners and Texan talk
Thnaks for sharing the state motto site. There are some interesting ones, probably with some interesting history behind them.

You Texans are right friendly! And talented with a needle, too!

I looked up the Arizona state motto and it was "God Enriches" although I suspect with our national notoriety for some time now that certainly not what other States would say our motto is! ha!

Thanks for a fun link today.

I really enjoyed this Fantastic link!