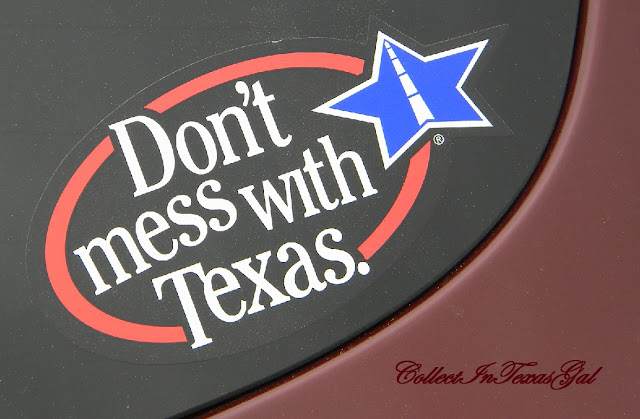 The phrase Don’t Mess with Texas is a trademark of the Texas Department of Transportation, and is part of a statewide advertising campaign started in 1986, to reduce littering on Texas roadways. 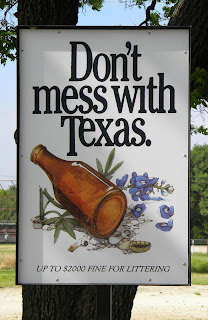 The campaign's target was mostly aimed at the 18-35 year old drinking male group which was the most likely to litter...and less likely to be able to afford the fine! To make sure they got the message the campaign was prominently shown on road signs on major highways, as well as in television, radio and print advertisements.

As an in state campaign, it was originally not intended to become a cultural icon, and beyond its immediate role in reducing litter, the slogan became a Texas cultural phenomenon and the slogan has been popularly appropriated by Texans.... 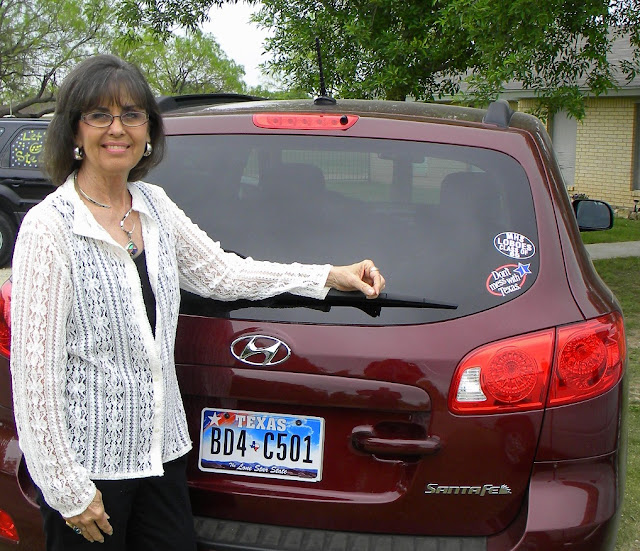 Though it appears on countless items of tourist souvenirs, the phrase is actually a federally registered trademark, and the department has tried at times to enforce its trademark rights, with limited success....Whew! 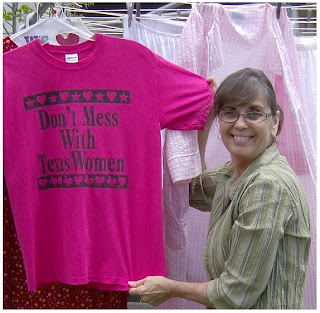 ...cause I wanted to share with you a few
Don't Mess With Texas Laws﻿...

In Borger, Texas it is against the law to throw confetti, rubber balls, feather dusters, whips or quirts (riding crop), and explosive firecrackers of any kind.

In El Paso, Texas...Churches, hotels, halls of assembly, stores, markets, banking rooms, railroad depots, and saloons are required to provide spittoons "of a kind and number to efficiently contain expectorations into them.  In Port Arthur, Texas, obnoxious odors may not be emitted while in an elevator.

Then for sure if you're cruisin' and imbiben' in Texas you should be aware of this law...

It is unlawful for a person to consume an alcoholic beverage while operating a motor vehicle upon a public roadway, if the person is observed doing so by a peace officer....duh! 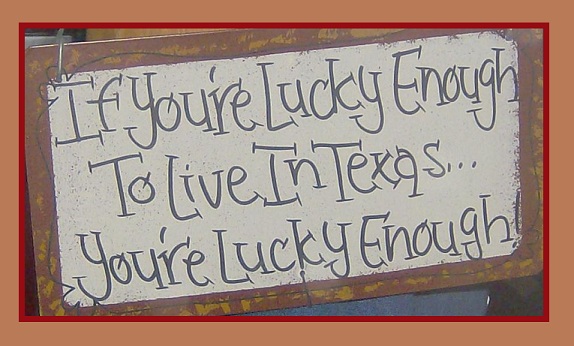 ....To Know These GuideLines To Livin Life In Texas

~Don't squat with your spurs on.
~Good judgment comes from experience, and a lot of that comes from bad judgment.
~If you're ridin' ahead of the herd, take a look back every now and then to make sure it's still there.
~Never kick a cow chip on a hot day.
~There's two theories to arguin' with a woman. Neither one works.
~If you find yourself in a hole, the first thing to do is stop diggin'.
~The quickest way to double your money is to fold it over and put it back in your pocket.
~There are three kinds of men. The one that learns by reading. The few who learn by observation. The rest of them have to pee on the electric fence for themselves...(I put this one in for HiHoney....thankfully he is an avid reader)
~Never miss a good chance to shut up....This one is my Cue to turn this 'Letter D' Post over to Jenny!

Just Click on Jenny's AlphabeThursday
for More of the
LETTER 'D' 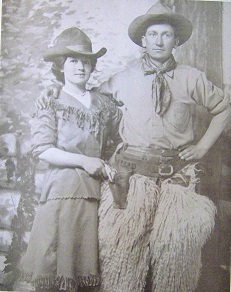 PS...Sometimes HiHoney reads my blog, so I'm including this for him as a reminder that we have a BIG Anniversary coming up and
Don't Mess With This Texas Woman.

While enjoying an early morning breakfast in a Ft. Worth cafe, four elderly Texas ranchers were discussing everything from cattle, horses, and weather, to how things used to be in the "good old days."
Eventually the conversation moved on to their spouses. One gentleman turned to the fellow on his right and asked, "Roy, aren't you and your bride celebrating your 50th wedding anniversary soon?"
"Yup, we sure are," Roy replied. "Well, are you gonna do anything special to celebrate?" another man asked.
The old gentleman pondered this for a moment, then replied, "For our 25th anniversary, I took the misses to San Antonio. For our 50th, I'm thinking 'bout going down there again to pick her up.
Posted by Sue McPeak at 10/13/2010

I love the last guideline about 'shutting up'. So many of us forget to do so much of the time and it only leads to trouble. At 56 I still haven't learned when to close my mouth.

Gosh must be tough but a clean place to live.

Very cute post! Being from SC, I don't know anything about Texas and I've never seen this quote before. I have to say though that the law about the spitoons is too funny, especially in church. I also enjoyed your last joke, that was a good one.

I did enjoy reading that Texan humour! Those Texan guidelines sure made me chuckle. :) Hope you have a wonderful anniversary.

Cute post~ My family lived in Texas briefly in the 80's...loved it there, you are LUCKY enough! How funny some of those laws on the books & WHO proposed those laws?! Especially like the one Port Arthur :-)

G'day ~ Happy anniversary just so I don't miss it! May you be blessed with many more joys & days of love & happiness.

I love those kid-ling pics ... you look gorgeous in the pics, too.

I LOVE this Texas saying and sentiment. I love all that "Texas stuff" and I've never lived there and have only visited twice - - - just passin' through both times.

Love the post! The joke at the end found me giggling.

I love Texas! It's just got an attitude all of it's own and everything just seems bigger and better there...

Loved the pearls of Texas wisdom you passed on! Very sage advise indeed!

Don't Mess With Texas is one of my favorite phrases! I have mugs, sticker, Tshirts etc!!

After reading this post, I now feel ready to visit Texas. I have to squat down to talk to my son a lot. The spurs will have to stay home or I will be in a lot of pain.

No doubt you are a real, true Texan. You are full of it today. I enjoyed every word and picture you featured. I have never lived anywhere bt Texas and when they put me under I willstill be in Texas.

I am still laughing. This was a very defining post today! We got a history lessons about Texas as well as fun facts! Thank you for this fun post today. Plus a very happy anniversary to you in case I miss it! Hugs and Blessings Anne

P.S.I have a Don't Mess With Texas Magnet on my fridge! My friend Jean, who lives in Tyler sent it to me!

I just love this post. Those laws really gave me a chuckle.

Thanks for your visit to Sharing Shadymont. Glad to know there are a few people who remember flour sacks. What on earth would we do with those 50 pound sacks of flour now??? At my house it would take forever to use that much! Please stop by again and visit. I love your blog!

Hi Sue, thank you for the sweet comments about my kitchen. I guess you have guessed, I LOVE to decorate. My passion without a doubt.

I love you post today. My sister and her family lived in Dallas for a few years and her daughter still has a sign in her car...Don't mess with Texas.Her son went to college (graduated) in Texas and still loves your Texas sentiments.

The laws and anything Texas always brings a smile to my face. Loved that joke. My sister just did the Round Top Antique sale. It was 10 days and she loved it. She sold well too.

Bill and I are having our 50th in two years. We have been thinking about what to or how to celebrate the occasion. I have entertained and hosted endless events and parties all my life and yet none of my children love to entertain like me. A week from Saturday we are having a BBQ for fifty people from a camera club we used to belong to in Jax, Fl. They are coming to NC for a Fall color camera shoot. However, I do not want to host my own 50th anniversary party. Got any ideas. What are you doing? What year are you celebrating? You are too young for 50th.

Well, I didn't mean to get so wordy. HA!. That's why I can't visit more bloggers. sigh!

Fun! I won't be messin with Texas for sure:)

Okay, I got the message! I won't be messing with YOU!:-D What a fun D Day!

Great post, Sue. I was interested to learn the origin of this phrase. I've heard it for many years - and I think it is great.

Which BIG one is it?

I was at a conference once in Texas and everything is just BIGGER in Texas. I sure hope your hihoney reads this before the anniversary!

omg that was a funny funny post, and i just love those guidelines!!! thanks so much for the chuckle!!!

I lived in Austin for a few years. This brought back some good memories. Thanks. Happy Alphabet Thursday!

These had me laughing out loud and reading them to my daughter, who came over during her lunch break from work.

And how interesting about the etymology of "Don't Mess with Texas."

Always good to know where these saying come from. This one is great. I love your rules near the end. Words to live by.

Love your post! Thanks for the laughs! I'm now following you on GFC! Would love a follow back! Come on over to the farm for a cup of coffee and a slice of hot, homemade bread!

Still laughing over the Annivesary remark. How totally funny.

You have such a way with words and I'm always excited to see your link as I journey through Alphabe-Thursday.

Thanks for the chuckle.

This was a devine stop!

I love your post and totally agree, Don't mess with Texas!!! Char

Okay, I a here visiting from Alphabe Thursday, but am kind of in love with your blog. So funny! And the pride you have in your state is amazing.

I remember the TV commercials years back that had a native American looking at litter and a single tear rolled down his cheek. It was a powerful reminder too. And I am all for the "NO Bodily Fumar" in those elevators! LOL. This was a great post. I enjoyed immensely! ~Ames

Great D-post! Littering seems to be a problem in other parts of the world, and not just in Texas. Good campaign! Hope it helps! In West Virginia and in some other states, a company can 'adopt a highway', have a section of a road that is their responsibility to keep clean and litter-free.

Thank you for visiting and commenting on my D-post. I am glad that you liked the little Dachshund. My choice of dog was only by chance; but I feel I was lucky to find such kind dog-owners who were willing to let me take some shots.
Please come back and take another look, as I have added another dog!

My cat Sara would also like to extend an invitation to visit her post for ABC-Wednesday, round 7 - M.
Best wishes,
Anna
Sara sends purrs.
Anna's D-word Alphabe-Thurs

Some good chuckles in this post! Loved it. Have a great weekend.

Well, WHO KNEW?! Great post...so many things I never knew about the great state of Texas! :)

Sue, I'm late visiting this week. Sorry! It's been a busy one here!

Love this post! Don't Mess With Texas was the brainchild of a friend. It's amazing how it has remained a state motto for all these years. Something good goes on forever! ;-)
~ Sarah