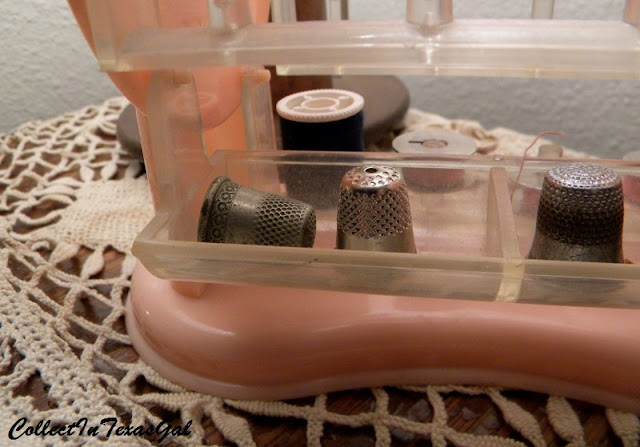 I Am NOT A Thimble Collector!!!  So what's with these Thimbles, Sue?
I imagine I came by them through an old thrifted sewing box or an estate sale where I cannot leave a kindred spirits Sewing Stuff Treasures to be cast off to who knows where!   So, even though I don't know who's finger once wore them, I do know they are safe and sound in my 'Pink Sewing Carousel' which was a gift from my Grandmother Minnie...who BTW was a Thimble wearer! 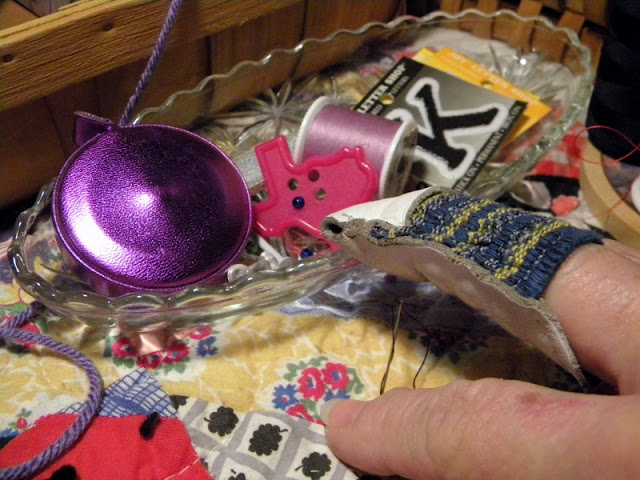 I am a Thimble Wearer, too, although different from Minnie's and the one's I've collected....oops!!!  Okay, I have collected a few...who could resist when they have such an interesting history and have been a popular collectible since the mid 1800's.
The earliest known thimble was Roman, was found in Popeii and made of bronze.  The first thimble made in England was in 1695 by a Dutch metal worker and was called a thumb-bell because it was worn on the thumb.  The shape eventually changed, and the name softened into thimble.
Early American Thimbles were made of whalebone or tooth featuring miniature scrimshaw designs and are considered valuable collectibles.  I don't have any of those!  Do you?  These rare thimbles are featured in a number of New England Whaling Museums.
During the First World War, silver thimbles were collected from "those who had nothing to give" by the British government and melted down to buy hospital equipment.  In the 1930's and 40's red-topped thimbles were used for advertising.  I do have a few from that time period....oops...I guess I'm a Thimble Collector afterall.
Thimble Lore
Leaving a Sandalwood thimble in a Fabric Stash helps keep moths away.
People who Collect thimbles are known as Digitabulists.


The Pink Carousel Post...Four Generations of Sewing
CollectInTexas Gal's FIRST Pink Saturday Post in 2009
and featured again today for
We Gather Together
Pink Saturday-November 17th, 2012
Posted by Sue McPeak at 11/17/2012

My mother did a lot of sewing when we were growing up. I still have some of her thimbles but they look metal. They are very old. I do not sew, just kept them.

Nope I am not a thimble collector either but oh I have one or two...ah several...ummm quite a few. :) some belonged to my Aunties and some came with vintage sewing stuff that I couldn't pass up either. I have some with advertising, some ceramic, some plain but whalebone or tooth.
Thanks for lots of interesting information on the humble thimble. Oh and I do use them.
Have a happy and blessed Thanksgiving (())

I have started collecting thimbles. They take up way less room than my treadles and other vintage sewing machines. It's funny, even tho I am a hand quilter, I only use a thimble when I am sewing on binding, then it is one like you show at the top, made of leather.

Collecting thimbles sounds like a lovely idea to me, just imagine the stories they could tell! Love the pink Texas button in your stash!

Why of course it would only be right for you to have a collection of thimbles.♥