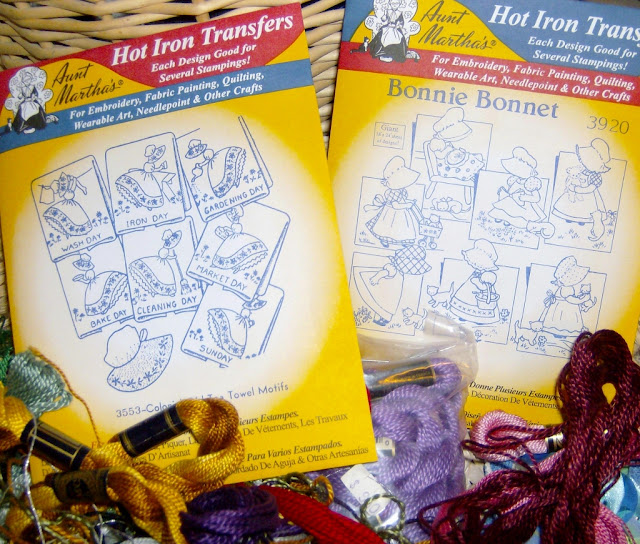 I mentioned in the post...Sue To The Rescue of SunBonnet Sue...my extensive collection of SunBonnet Sue Stuff.  Some of the 'SueStuff' I've collected for future Sue projects are these 'Classic Patterns' from Aunt Martha's Iron On Transfers.  As suggested on the envelope, they can be used for embroidery, fabric painting, quilting, wearable art, needlepoint and other crafts.  I always thought I'd use them for a quilt, but folks, I have enough quilts to 'Quilt Bomb' Dallas.
I've made a decision...with a little help from my Mama and a complete stranger. 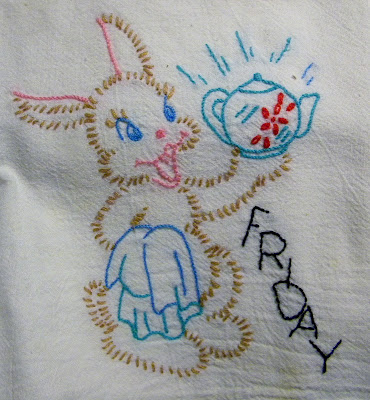 Aunt Martha's Bonnie Bonnet Girls Transfers are going on Tea Towels like these made by my Mama.
One for each day of the week...I don't know what happened to Mama's Saturday...maybe she needed a pretty Tea Towel for a special occasion on Saturday, but none the less, there are Seven Sue's and Seven Flour Sack Dish Towels in the package I found.
Did you know those Flour Sack Towels like my Grandma Minnie and Mama used back in the day are hard to find theses days?   I got the idea to use the Sue Transfers for Tea Towels from a complete stranger who came into the shop where I work looking for Flour Sack Towels or fabric to make them.  None to be had there, so I suggested she look online. 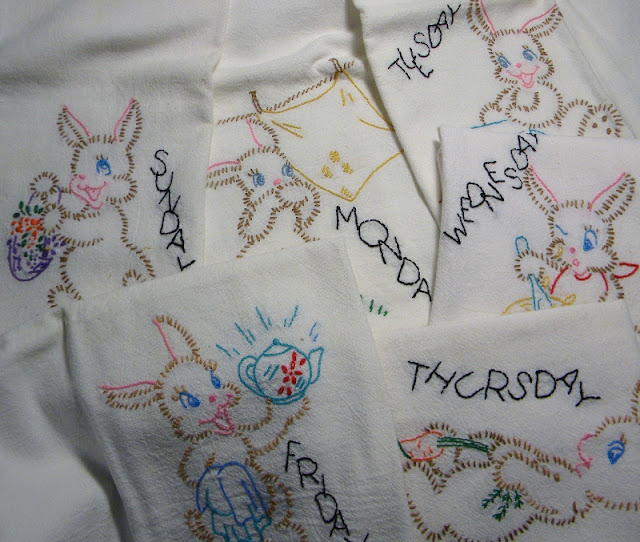 The Bunny Tea Towels were made by my Mama many years ago...probably in the 1950's or 1960's.  She never used them...except maybe the Saturday Bunny...and gifted them to me last year.  They had been tucked away in her special drawer all these years.  You can imagine how I treasure them.  I can't help but think that the Bonnie Bonnet Sue Flour Sack Tea Towels I plan to make will someday be treasured by my Grand Gals.  Oops....I did say Gals...guess I'll have to order TWO packages of Flour Sack Tea Towels.  I like the  Colonial Girls, too.
Posted by Sue McPeak at 11/22/2012

I have seen those towels in the Hobby Lobby in Mesquite, TX. I don't do embroidery so I didn't notice how much they cost. If your Hobby Lobby doesn't carry them, maybe they could order for you.

The towels are adorable - such a treasure!! Mama did a great job with the stitching. :)

I used to love hand embroidery, but have gotten lazy since getting an embroidery machine. Your towels are so sweet, and it would be fun to get back to stitching and make up a set.

I purchased sets of 5 flour sack towels from Walmart and Target a while back - do they not still carry them? My memory is that they were considerably cheaper than the Amazon price, but if they don't have them anymore at least there's a source for them.

I was JUST looking at those old fashioned transfers a few days ago in JoAnn Fabrics...being transported back to the days when I was little and my grandmother did embroidery on pillowcases...she taught me basic embroidery with just those sort of designs! Your towels are wonderful!