52 Ancestors Challenge...Week 9...Life and Death At The Courthouse 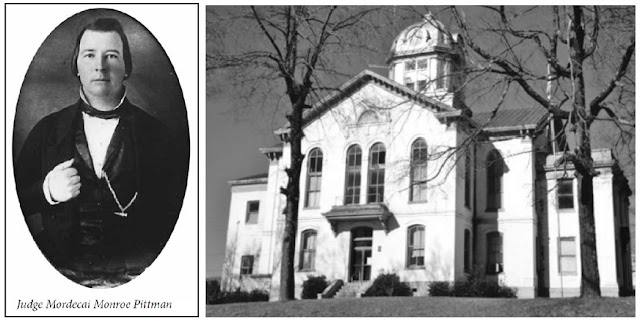 Mordecai Monroe Pittman
Jackson County Attorney and County Court Judge 1875-1877.
Jackson County Courthouse - Jefferson, Georgia
A two-story brick building built in 1879.  It was one of the first post-Civil War county courthouses built in Georgia.  It's courtroom has a Cathedral quilt pressed metal coved ceiling and the building is unusual for surviving with little-alteration since it's construction. (photo public domain Wikipedia)

There have been a good many of my Georgia ancestors who spent time 'At The Courthouse'.  Courthouse records have revealed a few standing in front of a judge for sentencing.  Others for filing on property disputes, will and estate petitions, and various Civil Court issues.       Several have been lawyers with political aspirations through the higher courts of Georgia.  For example my 1st Cousin 4x removed the Honorable Daniel Pittman who wrote a scathing article in the Macon Weekly Telegraph concerning the Congressional Resumption Act of 1875.  His Honor, from the Courthouse Bench' ruled on the case of the Fulton County Greenback Party vs the Congressional Resumption Act.  Read more:  Ordinary Court Judge's Greenback Judgement. 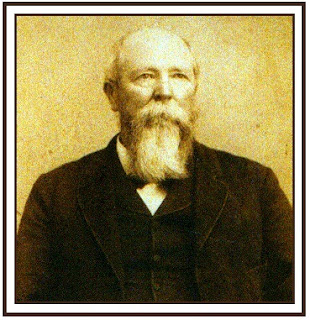 Judge Mordecia Pittman, 2nd Cousin 4x removed, and I share a Great Grandfather who was a distinguished and memorialized Revolutionary War Sons of Liberty Solider.
Lieutenant Mordecia Pittman enlisted in the Confederacy in May 1862 and served in CoE 34th Infantry Regiment of Georgia.  Ten years after the end of the Civil War in 1865 he served as Jackson County Attorney and County Court Judge from 1875-1877.
With so much of his life spent 'At the Courthouse', it seemed his death was destined to become an 'At the Courthouse' ending as his Obituary revealed.
Excerpt from the Jackson Herald, March 8, 1896 (Jackson County Historical Society News, Vol.14,No.2, Jan.2007)
Judge M.M. Pitman Dead - Little did we think when we wrote an article in our last issue giving an account of the accident that befell Judge Pittman, that we would be called on to record his death this week.  Honest, sincere, plain spoken, Judge Pittman ha gone to that country from whose bourne no traveler ever returned.  His eyes were closed in death on last Sunday about noon.  He was surrounded by family and friends as the death angel came to that home and bore the spirit of Judge Pittman into realms of eternity.
Judge Mordecai Monroe Pittman was born October 13, 1828, at Cabin Creek, Jackson county.  He joined the M.E. Church at Jefferson, and at the time of his death was the oldest member.  He united in marriage to Miss Mary J. Boggs February 6th, 1858. To them were born thirteen children, twelve lived to grown, eleven still survive.
He was admitted to the bar in 1858. He was Judge of the County Court in 1875.  He had been in declining health for years, and the accident hastened his death.
Age 67 years, 6 months, 20 days.  Judge Pittman was buried in Woodbine Cemetery.  The funeral obsequies were conducted at the Methodist Church.
(Mention made of dignitaries speaking on the life and character of the Judge, and one of the largest crowds ever seen at a funeral in Jefferson, Georgia.  Only surviving child named was son Marcus M. of Cleburne, Texas, who was telegraphed for, and was at his father's bedside when he died.)
Judge Mordecai M. Pittman was fatally injured when returning from court, February 1896.  His horse was frightened by an umbrella falling from his buggy and he was thrown from the buggy.
Posted by Sue McPeak at 2/25/2019

An umbrella?!?! With so many weird things that can happen on the street, a falling umbrella seems inconsequential. It’s a wonder he wasn’t thrown off the buggy years before.

How great to know the details about your ancestor, judge and attorney. I had forgotten that all those attorneys in my family spent time in court also. Oh well...they'll get their chances with all the topics coming along to spur our imagination about our ancestors!