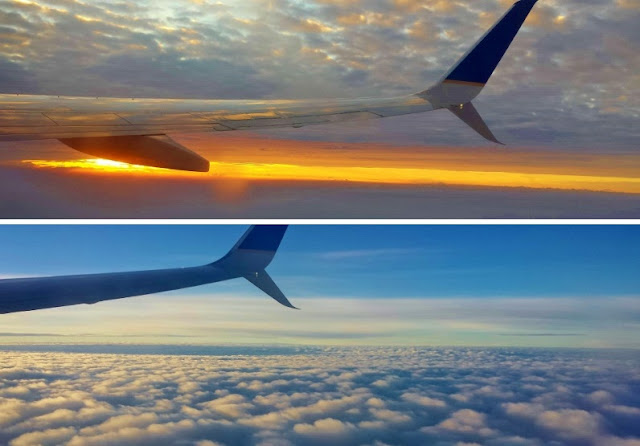 We Texans are always bragging about our wide open spaces, everything bigger than Dallas, the weather, and a whole host of other stuff that makes Texas appealing to people from coast to coast.  You noticed I left out 'Sunsets', which is often at the top of the 'Bragging List', and just one of my favorite things about living in Texas and being a Texan.
Now, I'm adding 'Sunrises' to the list.  Not that I don't see a sunrise pretty much every day as I am an early riser, but seeing a Texas Sunrise from the window seat of a jumbo jet was a first for me.  Lucky for me my window seat was far enough behind the wing to capture the sunrise and the glow it cast on the clouds as the plane climbed above the rising sun.
So what's this got to do with 'Climate Change'.

About 55 degrees!
It was 30 freezing degrees in San Antonio, Texas, when we boarded the plane at 7 am.
It was 85 balmy degrees when we landed in Cancun, Mexico, at 12 pm.
It didn't take us long to shed jeans, jackets, socks and boots for... 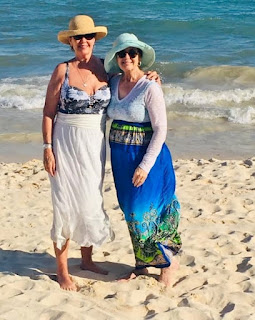 How great...both above clouds and now on sand in Mexico. Enjoy the heat and bring some home!

Bond with your sister, enjoy sand, siestas, and sips of tequila (!)(?) The sunrise pic is awesome. Have fun!