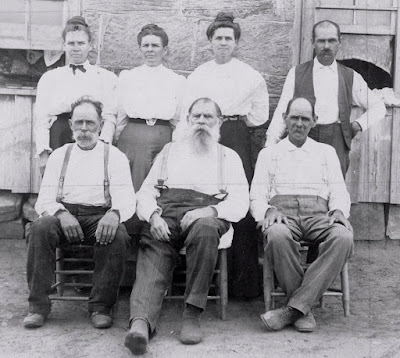 My 3x great grandfather J.M. Leatherwood.  Pictured here with six of his seven adult children.
The seventh not pictured was my 2x great grandmother M.J. Leatherwood Marley (family photo below)
J.M. Leatherwood was a veteran of the Civil War attached to CSA Elmore's 20th Regiment, Texas Infantry.
He was born in 1833 in Spartanburg, South Carolina and died at age 80 in  Jack County, Texas.
Known as one of the early Pioneers in that County, his descendants continue to live and farm his original homestead.
HERE is a post of his early settlement days in Jacksboro, Jack County, Texas. My 2x great grandparents and 8 of their 9 children.  Not pictured my great grandmother Martha Jane Marley Carroll (family photo below).  Mary Josephine was born in 1856 in Benton, Alabama and died at age 68 in O'Donnel, Texas.  Elisha S. was born in 1849 in Wilksboro, North Carolina.  He ran away from home at a young age...his whereabouts unknown to his North Carolina family until 1914 when he corresponded with his sister...HERE is that story.
Elisha and Josephine's children pictured in the portrait have all been profiled and their stories told as a result of their sister's, my great grandmother, Martha Jane's Photo Album...HERE is the Album.  The Marley Family Bible is a treasured heirloom and is in the possession of a Marley great grandson....HERE is the Bible post. 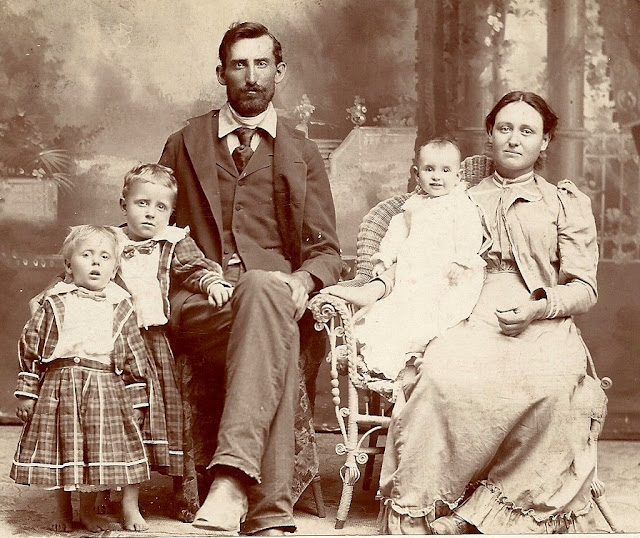 My great grandparents and three of their four children in 1900.  Their fourth child, Mary Ella was born in 1902.  My grandmother Stella, oddly enough, is not one of the children in dresses, but the baby in her mother's lap.  Great Uncles Othello Elisha and Mert Douglas are boys standing beside their father Stephen Bennett Carroll.  This Family Portrait was and continues to be the most important and significant photo in researching and establishing my father's maternal family tree.
Great Grandfather S.B. Carroll died in 1903 leaving his wife to raise four young children.  At the time of his death they lived in Jacksboro, Jack County, Texas, near her grandfather Leatherwood and parents Elisha and Josephine Marley.  Shortly thereafter, Martha Jane and her children followed the Marley's to Borden County, Texas, where they established a cotton farm.
Once again, Martha Jane's Photo Album led the way to finding S.B. Carroll's family in Tennessee with one photo in which she had written a name.  That story HERE. 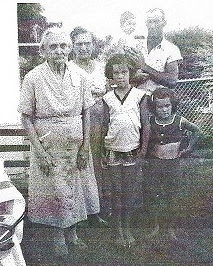 Sadly, that is the last of Studio Family Portraits.  Fortunately, there are a few Kodak snapshots like this 'Four Generations' photo of my great grandmother Martha Jane, my grandmother Stella, my Dad, myself and two sisters.  It is the last photo I have of Martha Jane.
If not for her and 'The Album', our Family Tree would be bare of my Dad's Maternal Branches and Generations of Family Photos.
Posted by Sue McPeak at 2/18/2019

I love the old timey photos - so pioneer stalwart. Everyone looks so grim in these pics - perhaps afraid the soul will be taken by a flash. Very cool that you have such history.

What a treasure to have these family photos.