Sepia Saturday...Jack of All Moose Jobs 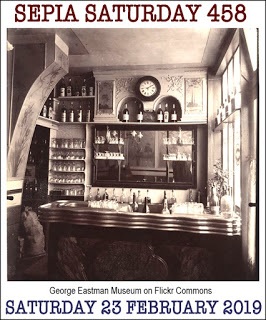 Sepia Saturday458...now that is a well stocked bar...if you are there for a glass of wine or perhaps a cocktail.  There certainly are enough shelves of glasses as well as ones on the bar to serve a whole tour bus of wine tasters.
Let's hope the bartender has the tasting wine stashed under the bar.  He's going to need a ladder to get to the good stuff.
I haven't been to many upscale wine tasting bars.  As the daughter of an Iowa farm girl and a Texas cowboy growing up in West Texas, my idea of a fancy bar was 'The Jersey Lily'.
By the way, I should explain that in Texas...'Bars' were and still are known as Saloons, Watern' Holes, Cantinas and even Dives.  Some places you might not think of as a 'Bar' have names like 'The Blue Room' or 'Moose Lodge'.
Both of which gives the impression of either a cool, restful nights sleep or a vacation spot in Colorado. 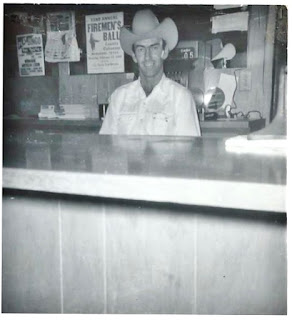 So, about the 'Moose Lodge'.  There may be one in Colorado, but it won't be for vacationers looking for a place decorated in a Early Log Cabin Hunting motif with moose heads hanging on the wall.
I'm talking about the 'Moose Lodge' in West Texas where my Dad was the Jack of All Moose Jobs.  One of which was as Bartender where a glass of wine was never poured in a fancy glass.  There were no glasses.   Only bottles!
On a good night, like when the Fireman's Ball was held, the bar was covered with bottles of Lone Star Beer.  There were other brands of course, but when in Texas...yada yada yada!
Notice there are no bar stools in front of this Moose Lodge bar.  That's because there were lots of tables for the Moose (not Meese) to sit during meetings.  The tables could be arranged for a number of events including Moose Conventions, Birthday Parties,  Holiday Events and of course The Fireman's Ball. 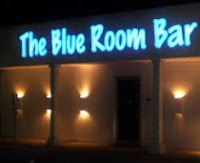 PS...About the 'Blue Room'...not a place for a cool, restful nights sleep.
~But, a place where I learned to dance 'The Cotton Eyed Joe' and shoot a mean game of 'Eight Ball'.
~My Dad was a 'Cowboy Minnesota Fats'
~Yep, we do have no frills, no deceiving named places in Texas like the 'Blue Room Bar'.
Posted by Sue McPeak at 2/23/2019

Email ThisBlogThis!Share to TwitterShare to FacebookShare to Pinterest
Labels: In Memory, SepiaSaturday

I'll keep in mind that you are a ringer at Eight Ball. Fun post

Is that bar extra high or was your dad sitting down? And thanks for the lesson on proper Texas terminology.

Great picture of your dad!

Your Texas 'dives' sound so much more interesting that the wine bar in the prompt pic.

Great match for the prompt -- and the Moose Lodge sounds like it was fun. Any bar with dancing is four stars in my book.