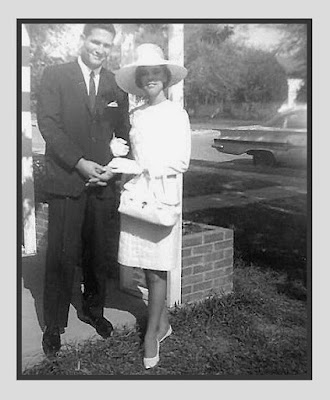 Now, that WAS 'BackInTheDay' and although this picture wasn't taken on 'The Day', it was as close as we could get to a traditional 'Wedding Album Photo'.

Just look at HiHoney in his suit and tie...so handsome...and taller than me.  Had I stood next to him on the porch, I would have been at least a 'Hat' taller.


Our wedding was anything but 'Traditional', as we eloped to Juarez, Mexico.
That story...
Juno...Goddess of Love...Ole'
Here we are 50 years later....with somewhat of a traditional announcement. 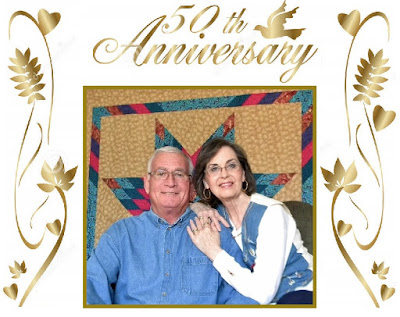 It's our Golden Anniversary, and nothing can compare
With the joy of celebrating all the warmth and love we share.
Wed on December 27, 1965
Posted by Sue McPeak at 12/26/2015

Congratulations. Your wedding was an adventure. Did you have to remarry in Texas?

Thanks Betty. We just had to register our Mexico Certificate at the County Court House to be legally married in the eyes of Texas. I guess it worked or else we have been living in sin for 50 years. Not really...we would have been declared Common Law Married after 5 years. LOL!!!

Hi Sue ... wonderful - many many congratulations to you both ... big hugs and cheers Hilary

Happy Anniversary! It can't have been that long ago. You aren't that old.