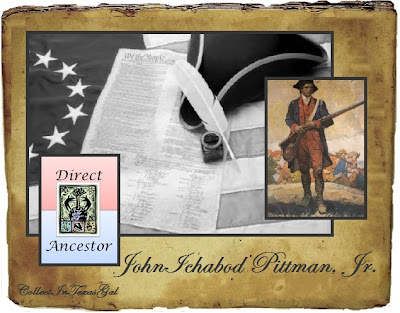 Headquarters, Savannah, Georgia 19th August, 1778
The first Battalion is ordered to march to the western frontiers, as soon as possible; those in Savannah must be sent to Augusta immediately, and Lt. Colonel Harris will give the necessary directions for having the remainder who are to the southward marched after them. As the laws of self preservation will justify the measures, such of that battalion who are prisoners of war are ordered to be armed, for the purpose of securing helpless and innocent women and children from the scalping knife of the bloody allies of the British King.
By order of Commander Colonel Samuel Elbert
2nd Georgia Battalion, Continental Army

From: The Collections of the Georgia Historical Society Vol. V. part 2 Order Book of Samuel Elbert, Colonel and Brigadier General in the Continental Army, Oct. 1776 to Nov. 1778

The order given by Brigadier General Elbert for the 2nd Georgia Battalion to be sent to Augusta immediately, set into motion Private John Ichabod Pittman's march into battle against the British King and his bloody allies.   As a soldier under the command of Colonel Elbert and Captain George Hancock, it is probable he saw action at The Battle of  Kettle Creek, a major encounter in the back country of Georgia, near what would become the Pittman Plantation in Wilkes County.  That February 14th of 1779, the Continentals decisively defeated and scattered a Loyalist force that was on it's way to British-controlled Augusta.

The 2nd Georgia Battalion under Col. Elbert met the British again in the Battle of Brier Creek.  On the afternoon of March 3, 1779, the Continental Army camp was warned of the approaching British, and hurriedly deployed about 900 troops with a short supply of ammunition and varying muskets.  They finally arrived at Brier Creek and positioned their troops in the center formation with a North Carolina regiment to their right and a large gap and the river on the left.  The British engaged with long range artillery forcing the Americans to split ranks and advance into the British Calvary and foot soldiers armed with bayonets.  Outnumbered and armed with only muskets, the Patriot Militia broke and ran without firing a shot.  The North Carolina regiment fired a few shots and then abandoned the fight.  Col. Elbert's 2nd Georgia Battalion held formation in the center while the militia around them fled for the swamps, and were eventually surrounded, forcing Elbert to surrender.  Two hundred of his re-enforcement troops arrived too late, and withdrew before getting caught in the surrender.

In the aftermath, the British counted five dead and eleven wounded.  The devastation of the Americans was never fully tallied, as many militiamen retreated all the way back to North Carolina, and an unknown number drowned in the swamps.  The British claimed that 150 American bodies were found on the battlefield, and 227 captives were taken, mostly from Colonel Elbert's Continentals.

Several months after the Battle of Brier Creek, Private John Ichabod Pittman's name was among the names on the 'Casualty List' in Augusta.  The extent of his injuries is not known, but he survived and  was among the Pittman Revolutionary Soldiers to receive land grants for their service in the Sons of Liberty Militia and the Continental Army.  He was discharged in September 1779 as a result of his injuries.

John Ichabod Pittman  was 28 years old at the end of his service in the Continental Army.  He lived a long and prosperous life on the 287.5 acres from the land grant and other Georgia land he bought and sold throughout his life.   His descendants continued to farm and raise families on those properties as well as continued to serve the State of Georgia, the Confederacy, and the United States Armed Forces in World War I and II.

The Colonial Period for Tracks of My Georgia Ancestors has been a genealogy dream come true with the discovery of  Fifth Great Grandparents John and Mary Polly Rowe Pittman.  The events of their lives in conjunction with the historical events of their time has enriched my knowledge and appreciation for Colonial America, The Revolutionary War, the History of Georgia, and my Ancestors.

"Yesterday the greatest question was decided... and a greater question perhaps never was nor will be decided among men. A resolution was passed without one dissenting colony, that these United Colonies are, and of right ought to be, free and independent states."
John Adams, Letter to his wife, Abigail Adams, July 3, 1776﻿
Posted by Sue McPeak at 7/01/2013

You really know how to capture my attention! I really love hearing about your ancestors. Thank you