Friday Faces...Minister of the Scriptures 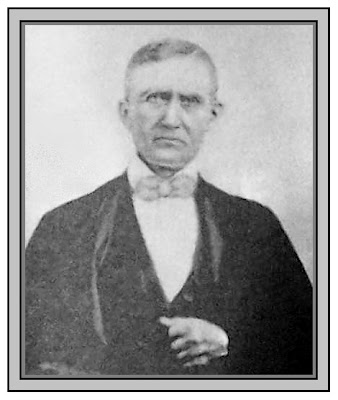 Throughout the early history of my Colonial Georgia Ancestors, Religious Freedom played a significant role in their lives beginning with their migration from Virginia to Georgia. Passionately devoted to the early Baptist Separatist Theology, the sons and daughters of John and Mary Polly Rowe raised their children in the same vein of what would prove to be a dominate force in their spiritual and daily lives.

So it would be for John and Mary's grandson, Elisha Coleman.  Elisha was born four years to the month after the death of his grandfather John, and although he didn't experience his  grandfather's passionate Baptist beliefs, he was strongly influenced by his mother, Millicent, John and Mary's fourth daughter.

Elisha was born on April 2, 1789, the fourth child of Jonathan and Millie Pittman Coleman.  His older siblings were brothers Charles born in 1786, and Jesse and Joseph who from all indications of their birthdates were twins.  Elisha would become the older brother to fifteen younger siblings among them another set of twin brothers.

His parents were founders and Charter Members of The Bark Camp Baptist Church in Burke County, Georgia on land that once was hunting and grazing land of the Indian Nations.  After the Indian Treaty of 1763 people moved into the area in large numbers.  The church was organized in 1788, even before George Washington was elected president.  It was a center of worship, culture and hospitality in one of the oldest settlements in Burke County.

Elisha remained a faithful member of Bark Camp Church for 52 years.  During those years, his father Jonathan was buried in the churches cemetery along with his older brother Charles.  His mother Millicent, would join them in a matter of years.  His calling to the ministry in 1841, moved Elisha and his family to Emanuel County, Georgia where he joined the Old Canoochee Church.  After a few years of his service there, he went on to build his own church in Swainsboro, Emanuel County Georgia on land surveyed years earlier by and deeded to Elisha's older brother Charles Coleman.  Charles had obtained a grant from the state of Georgia and deeded a part of the tract to Nathaniel Daniels who in turn made a deed to the church dated October 16, 1849.  The Hawhammock Baptist Church continues to be an active part of the community today.

His obituary stated:  The church has lost her brightest light, and the county one of it's best citizens, ever ready to lend the helping hand to the needy and distressed.  His theme was to hear and expound the Scriptures.  ~The Christian Index, Feb. 13, 1861~

Reverend Elisha Coleman died on October 30, 1860 and was buried in a cemetery named in his honor, Elisha Coleman Cemetery in Swainsboro, Emanuel County, Georgia.  His life and service are well documented in Georgia history, and now in 'Tracks of My Georgia Ancestors'.  Reverend Elisha Coleman's branch in our family tree puts him as 1st cousin 5x removed.  His mother was my 4th great aunt, sister to my direct ancestor and 4th great grandfather John Ichabod Pittman, Jr.

Email ThisBlogThis!Share to TwitterShare to FacebookShare to Pinterest
Labels: Fridays Faces-Geneabloggers, Tracks of My Georgia Ancestors

Yes, I can see him in the pulpit. I wonder if he preached with a lot of drama and fist-banging or if he was quiet and thoughtful.

My first thought on discovering his photo was how thoughtful he looked. So, I'd say thoughtful with a voice to expound scriptures loud enough for everyone to hear.

The church he built was a large log cabin. I imagine the pulpit gave him ample room for plenty of fist-banging.

It really helps in our genealogy research when our ancestors were heavily involved with a religion. Seems there is so much more documentation.

He looks stern and serious but his obituary speaks very well of him. Amazing how you can track your bloodline back in time. :)

We should all hope to have such an obituary when our time comes.

My goodness you have so many interesting people in your lineage. I sure appreciate your hard work to share with us,