Friday Faces From the Past....BEFORE and AFTER Restoration 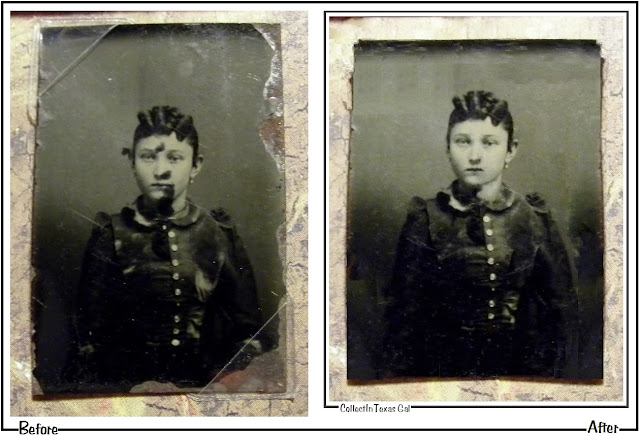 If it ain't broke, don't fix it.  If it's old, old, old don't compromise  it's value by messing with it.
Those are 'Rules of Thumb' in the 'Vintage World' and in general.  I respect that...to a point...and then I get out my own 'Thumb Ruler'.  As is the case of this 'Tintype'...yes, it really is...so exciting...of my Great Grandmother Martha Jane Marley Carroll.  It was in her 100 year old Album...HERE...and like most of the photos, was unidentified in any way.
TINTYPE Photography
Also known as melainotype and ferrotype.  A photograph made by creating a direct positive on a sheet of iron metal that is blackened by painting, lacquering or enameling and is used as a support for acollodion photographic emulsion.  First described by a Frenchman in 1853 and then patented in 1856 by US photographer Hamilton Smith and William Kloen of the UK.  The process became very popular during the Civil War and continued into the 19th Century as inexpensive portraits often taken by street photographers at carnivals and fairs as they were simple and fast to prepare.
﻿ 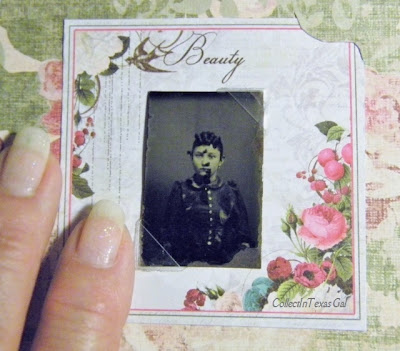 I estimate this Tintype was taken between 1887-1889
I digitally restored it and compared it to photos of Martha Jane as an older woman.  Although not a positive ID, it is a good likeness, and the Timeline fits.  Of course I did not MESS with the original as you can see in the pictures above.

That is a RULE...and I never, ever break rules...fingers crossed.

They don't smile. Why? Do you know? Your relatives look like my relatives.

You did a good job on the restoration. They didn't smile because they had to sit perfectly still for several minutes.

Have a great Friday, Sue. ☺

Hi Sue .. interesting information about the TinType - amazing photographs and records were around in the mid 1800s ..

How fantastic that you've got that photo album from your great grandmother - and I'd love to be able to produce a digitally restored photo as you've done .. hope to start doing this sort of thing later this year ..

Lovely to see and well done on the tracing back .. cheers Hilary

Great job on the restoration; I used to hand color black and white photos. No smiles because it was easier to hold a serious pose than a smile for the several minutes the photo took.

Nice work! I have often discussed ,with my sisters, the topic of relatives not smiling in their photographs. We all have come to several conclusions. They had to hold still for a longer period of time while the photo was being taken. Maybe the photograph was a once in a lifetime thing and they felt they needed to be serious.

So agree with you but do love that you "restored" it so you could really enjoy and compare.
My BigMama had an album and no one was identified either.

Great job and I wonder what they will be doing with our pictures in 120 years :)

I'm totally in favor of digital restoration as long as you keep the original or at least a digital copy of the original in all its tattered and torn glory.