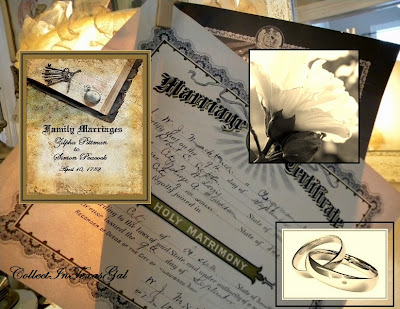 The Colonial Marriages of my ancestors began in the late 1690's after the first married couples came from England.  First generation born American Colonists' marriages often followed customs of their homeland with dowry's and marriage ceremonies.  As far as I know, none of my ancestral Virginia brides were 'Auction Brides' paid for with 80 pounds of tobacco which was the practice in the early 1600's.

In the colonies, weddings were not religious ceremonies.  Rather, they were a civil contract that set the responsibilities and duties of husband and wife.  In the marriage contract, women were protected by law in some colonies, for instance, a law passed in 1641 forbade men from beating there wives unless "it be in self defence."  It was also not unusual for many women to enter marriage with prenuptial contracts that would give her the right to retain control of her own property, or that it would return to her if the marriage dissolved.

On the more romantic side of weddings in Colonial America, brides and grooms often exchanged vows they had written themselves before starting the celebrations that could last for days.  In the Southern colonies...my ancestors part of the colonies...the couple was usually married in the bride's family home by a minister.  After the formal ceremony, there was feasting, dancing and drinking that sometimes lasted for days.

Contrary to popular belief, colonial girls seldom married in their teens.  It was far more common for colonial women to marry between the ages of 20 and 23.  The men were often older, sometimes in their mid to late twenties.  It was a father's duty to see to it that all of his daughters were provided for in one way or another.  While that sometimes meant arranged marriages, it was more common for a father to negotiate with the suitor of his daughters choosing.

Because life was difficult and life expectancy short, it was not unusual for a colonial man or woman to marry three of four times in their lives.  While there were families with 10 to 15 children, it was more common for families to have seven or eight children.  I found these marriage and family traditions to be a common thread among my Colonial Ancestors.

In researching and documenting the daughters of my 5xGreat Grandparents John and Mary Polly Rowe Pittman, the stories of their marriages, mixed with the historical events of the times, made each of their weddings and marriages a story worth telling.  I hope you enjoy them and will be inspired to search beyond the names and dates of your ancestors, and be rewarded with a story of a life lived...for every life in your family tree is significant in time.

Sue this is so amazing to me. I wish that I had the time to research.

Have fun with your continued research!

What wonderful information to have been able to attain! I was very focused on researching ancestry for awhile, and my favorite parts were the genuine stories I ran across. Though I didn't find any wedding stories, I read of a relative who managed to escape when they forced the Cherokee on the Trail of Tears. I found records of the shop he set up on the Appalachian Trail, a successful business man and a Cherokee. I can't tell you how delighted I was to find that information.

I would love to do this kind of research on my family. I don't have any Colonial ancestors—we're rather new to the U.S.—but there's still so much I could learn about my dad's side, which came mainly from French-speaking Canada, and my mom's side, from Norway, Germany, etc. You're posts always inspire me. ☺

I love the fascinating stories you are turning up with your research.

This is just so interesting.

Great information. I love that loophole for wife beating "in self defense." I guess men could say, "Her cooking is killing me!"

Your phamily history is so amazing and I really enjoy reading about them. My great grandfather married my Aunt Ang's mother . My aunt Ang was married to my mom's brother. I was so fascinated as a child when she told me that story. An interesting fact is they were always buried with their first spouse! When my oldest sister passed away in 2001 her ashes were buried by my folks, or rather my dad at the time my mom was still living. When my brother-in-law passed away (both of them way too young) his phamily wanted him buried in Michigan where he was raised but my middle nephew Edward researched military cemeteries and he buried his dad in a full military service. He had serviced 27 years in the U S Army so it was appropriate but my middle sister can not get over it! Although it is an odd arrangement, I am very hopeful they are both resting in peace!