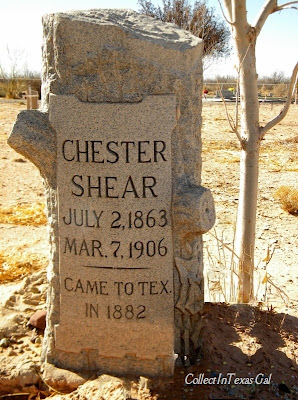 The new born infant of German immigrants began life in a state with divided loyalty's to the Confederacy and the Union with strong ties to Kentucky born President Abraham Lincoln.

At the age of 19, Chester made his way to Texas.  The first records of his living in Grandfalls, Ward County, Texas comes from the History of Ward County 1887-1977.

In the late 1890's J. Chester Shear was the Pharmacist at the drug store located in the front portion of the Brandenburg house.  It was during this time he became acquainted with Dr. Charlotte Bergman, her husband Abraham and their four daughters.

Dr. Bergman, a Swedish physician of New York and Cleveland came to America in 1889.  She and her husband Abraham, a former owner of a Swedish Chemical factory, were persuaded to come to Ward County with the promise of 80 acres which included a Sanitarium.  Their contract stipulated they operate the sanitarium for two years or the property would revert to the sellers.  They stayed the required two years and then some until Dr. Bergman became concerned her now of age charming daughters would become involved with the 'West Texas Pioneers'.  (History of Ward County 1887-1977 pg. 168).

For all her attempts to move her daughters from Grandfalls, three of them returned to marry West Texas men.  Twenty year old Gertrude Bergman became the bride of J. Chester Shear, 34 year old pharmacist in 1899.  Sister Charlotte married Tom Brandenburg and Dagmar wed Will Eudaly.

Sometime in the early months of 1900, Chester and Gertrude moved to Graham County, Arizona, where Chester worked as a carpenter.  The circumstances of this change in location and occupation are not known, nor the details of Chester's early death at the age of 43 in 1906, but it is possible that Chester suffered from consumption (tuberculosis).  As a common malady of the time, TB was often the reason for moving to the drier climate and sanitariums of Arizona.   Apparently Chester and Gertrude returned to Texas sometime before 1905 when their son Henry was born.

Gertrude Bergman Shear and five year old Henry, are listed in the 1910 Census as living in San Antonio, Texas in a private home where Gertrude is employed as a live in servant.  Ten years later in the San Antonio, Bexar County 1920 Census, they are listed as living with Dr. Charlotte Bergman, Gertrude's mother who is now widowed and a practicing physician.  Also listed is Gertrude's husband, Alexander R. McDonald.

And that story will have to wait for another Tombstone Tuesday!

Chester and Gertrude are Not Kin...but we are connected.
Chester most likely dispensed my Step Great Grandmother Nancy's heart medication,
and Dr. Charlotte Bergman was probably her doctor.
Nancy and Great Grandfather George Washington Pittman lived just down the road
from the Bergmans, and no doubt knew all the charming Bergman daughters
and their West Texas Pioneer husbands.
It's a 'Small World Afterall'.
Chester Shear Find A Grave Memorial
Tamarisk Cemetery
Grandfalls, Ward County, Texas﻿
Posted by Sue McPeak at 6/18/2013

What a great grave marker! Love the connection to your family. I think sometimes we forget our kin lived in towns and were touched and touched the lives of many.

What a unique tombstone!

I hope you're having a great Tuesday. ☺

Well I enjoyed that one. Will come back for more!~Ames

Oh Sue you sure can tell a story!

Interesting story. I've seen many tombstones that look like tree stumps. I'm not sure I really "get it." A lot of them have been grave markers for members of Woodmen of the World. That makes SOME sense, but others, not so much.