N is for Needles

Sewing fills my days, not to mention the living room, bedroom and closets.
{Author Unknown...but it could have been Me} 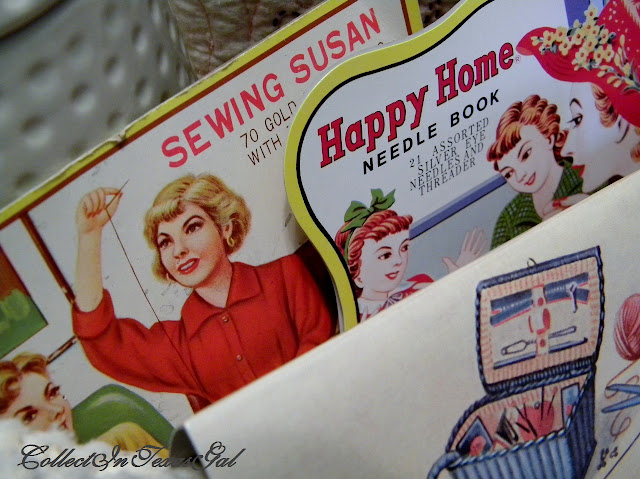 I remember exactly when I became fascinated with The Needle! 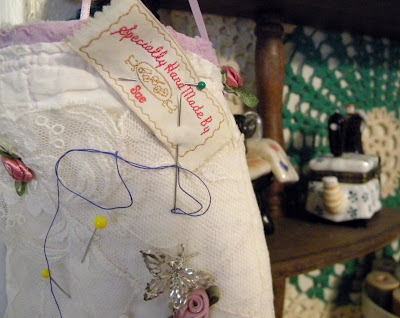 The rhythm of the Treadle Sewing Machine and Mothers hands feeding the material under the foot had this six year old girl completely spell bound.

I would sit beside her for hours and watch the needle go up and down.

My job was to hold the Tomato Pin Cushion to receive the pins that steadily were pulled from the material before it went through the foot.

Mother was very careful to always pull the pins so the NEEDLE would not be damaged.  It was a long way to town for a package of Singer Needles. 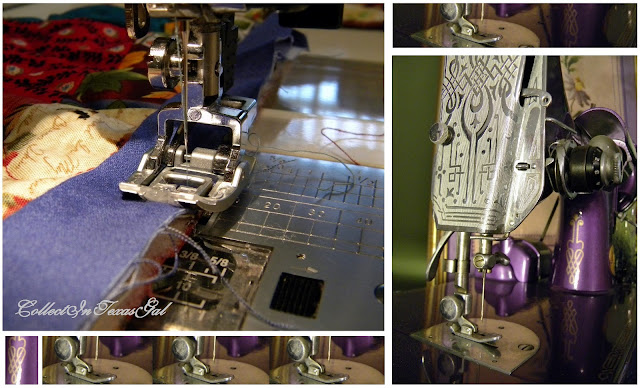 Starting with Needle and Thread and scraps of material, I hand stitched doll clothes until finally I was long legged enough to reach the Foot Pedal of the old Singer Treadle. And so began a life time of Needlework, an appreciation  for the Art of Sewing and Collecting Sewing Stuff.  I still occasionally sew on a Treadle...often sew on a 1950 Century Edtion Featherweight...and mostly sew on a Janome Memory Craft 6600 Quilters Dream Machine. 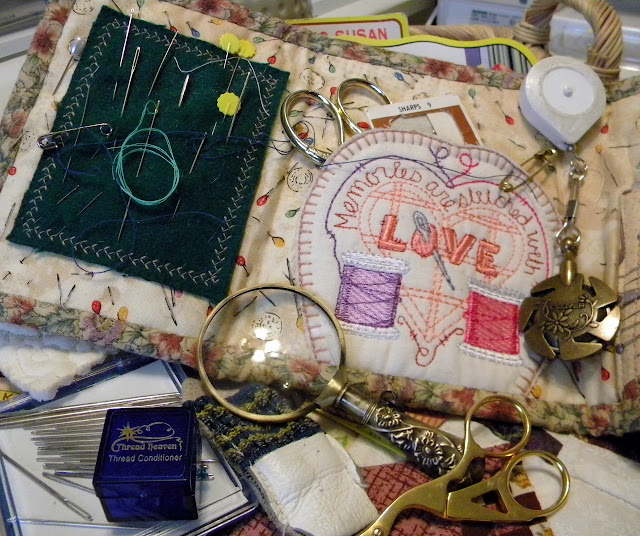 Here's a bit of NEEDLE History....afterall there are lessons to be learned about the Letter N.
Take your needle, my child, and work at your pattern; it will come out a rose by and by.
Life is like that - one stitch at a time taken patiently and the pattern will come out all right like the embroidery.
Oliver Wendell Holmes 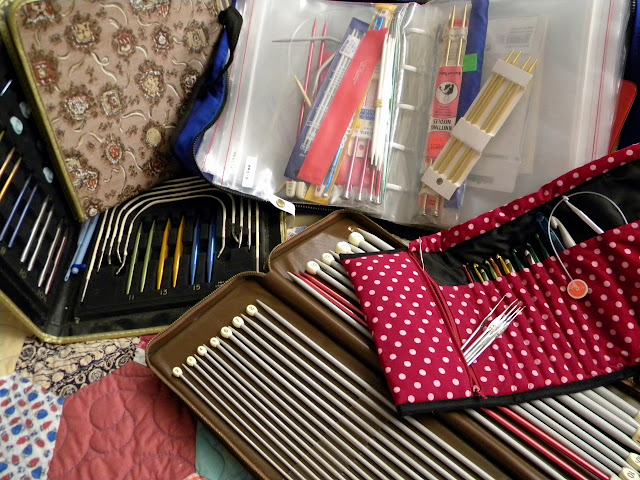 "I will not allow my creative spirit and need to knit to be thwarted by a lack of materials."
Stephanie Pearl-McPhee ~ The Yarn Harlot
"DITTO"
CollectInTexas Gal ~ Collector of Knitting Materials 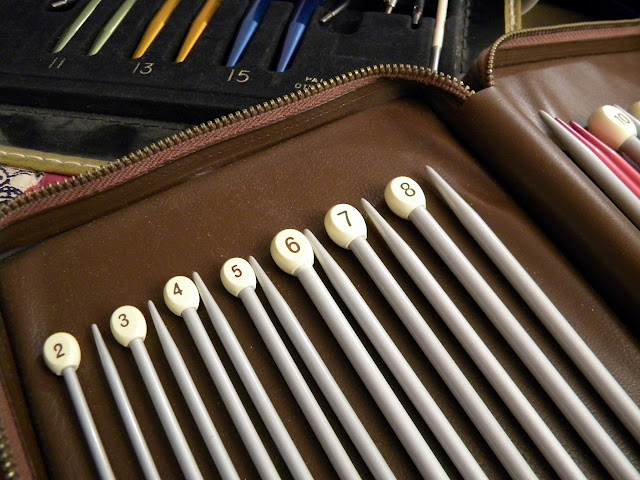 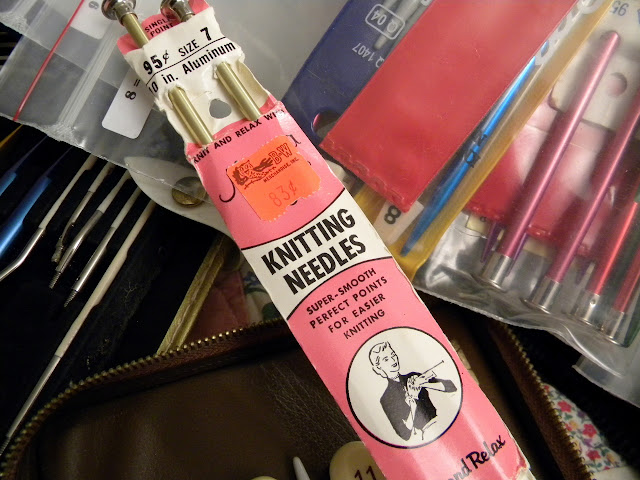 I like making a piece of string into something I can wear.
{Author Unknown...but it's not Me...unless you count OneSock} 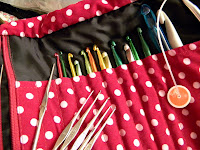 Another Set of Needles - Crochet - "I like making a piece of string into something I can use to wash dishes."
CollectInTexas Gal...maker of Crocheted Dish Rags.
N is for Needles....Linked to Alphabe~Thursday...Thanks Jenny!
As ye sew and knit, so shall ye rip.
{guess who}

Interesting little history of needles and some great photos. I am reading "The Clan of the Cave Bear" series and I am in book 3. They just invented the needle...ha.

I haven't knit since I was a kid, and now I see those needles I do miss it. Wonderful post!

Great post Sue!! and you brought back some wonderful memories for me!! I did the same thing!! I would handsew Barbie clothes and actually used my grandmother's treadle (sp) machine when I was older. Now I sew on my Mom's old Kenmore machine. ;) or "try" to sew. Lol!!

Great collections Sue! I haven't sewn in a while, love fabric-all of the colors and textures! Only one fabric store left in this area, such a shame. I have my G-Mom-B's Singer treadle, beautiful machine that still works:@)

I'm taking a crochet lesson over at Michael's tomorrow. My washcloths never seem to come out square and I think I need to learn how to interpret the directions better. I prefer the homemade to the store bought. If I do good with that then next is knitting lessons to make a shawl. Loved your post today.

What a wonderful variety of needles!

Sue I love this post! I have my nana's antique sewing machine and cabinet, I don' even know if it still works, its a treadle so it probably just needs a good cleaning..I have some of my nana's old thread and needles, too..so I loved learning the history.

Interesting post!
I inheirited my godmother's knitting basket - what fun it was (and still is) to rummage around in it for the right size for a new project.

My grandmother taught me to crochet...I have one of her bone crochet hooks...was crocheting a cowl this morning. Your post brings back sweet memories.
Sherry@Back2Vintage

No wonder I haven't seen you lately. You have been real busy helping your sister. A huge job to say the least. When we moved from our last LARGE home my sister came to help me pack. I swear to goodness, I would have laid on the floor and cried if I had to do that alone. It was so hard even WITH her help. You are a dear sister. Has she moved yet?

I love your sewing history and the quotes. Your memories are much like mine with my mom sewing her five daughters matching dresses and play clothes on a Singer treadle machine. My first outfit I made was a doll dress my mom cut out of the newspaper, without a pattern. I sewed it by hand and my mother said I had to sew the tiniest stitches. I was sooooo proud of that little dress. I never used a treadle though. AND, I do not know how to knit. Isn't is wonderful that we had mothers that knew the craft of sewing would be the best thing they could teach us?
Happy days to you Sue. I did pick a one word New Years motivator or resolution if you will. The word is 'ACCOMPLISH' I have lots of things I need to accomplish this year. I hope it works.
Hugs, Jeanne

As a quilter I particularly enjoyed your N post. great images! Somehow we often get caught up in collecting the objects we use frequently & can feel the connection to the earlier owner. I was going to post about my own Needle Cases but life got in the way & I ran out of time!
Glad I found you by way of Jenny Matlock and will add you to my Favorites!

My mom is a very competent seamstress. Sadly, it never took with me.
She tried, though!

What a great post Sue! I really enjoyed all the little quips and quotes interspersed. I remember my Great Grandmothers treadle Singer too and wish I new what happened to it. I have 3 sewing machines, a very old Pfaff (predates WWII) my Mom's Singer and a really nice Bernina Hubby bought for me. I would really love to have an embroidery machine someday. Have a wonderful weekend, Nan

Fun post! Sweet memory of helping your mom. I loved to watch my grandma sew... mom not so much. She apparently didn't enjoy it and she always got grumpy,lol.
Have a good week, Annette

I think many of us young ladies watched our moms and grandmas sewing, or even did a bit of our own. Your post brings back memories.

BTW, I love your photography (blog) as well.

I have a pack of those needles in my sewing kit and I still use them. I think they were my mom's.

Isn't it neat to look back on when we first learned to sew? I think my grandma started us girls out by letting us play in her button box. She had the prettiest buttons. She would then give each of us girls a large needle and thread and let us string up the buttons. Good for keeping noisey little girls still and busy. I think that is why I have good manual dexterity to this day. Still wish I could knit. Maybe one day I'll find someone to teach me. Love your "N" post!~Ames

You already know that we have many similar memories of childhood. I too remember sitting at my mother's feet while she sewed. However, she did have an electric Singer. Instead of the pin cushion, I was allowed to string buttons from the button box. I've always loved both hand sewing and machine stitching. Thanks for the good memories.

An Oasis in the Desert said...

I'm so glad to have discovered your blog. I sent you an award.
CAS

What a wonderful N post! I love the pictures--very creative and artistic. Your love of the craft really comes through in your writing.

Sue I just found your blog and your post brings back alot of memories. And it looks like you have a purple sewing machine. Wow what a treasure.

I used to have such a wonderful collection of needles! One for every sewing job. Now I am lucky if I can fine one to sew up the holes in the dog toys! Rod can always find one, though. What does that mean??

Sue I love this post! I am no sewing talent, destroyed by a rotten ole mean nun in the 9th grade of high school. But I have so many fond memories of my aunt Ang sewing. She made so many beautiful outfits for me and my late sister Pat made so many beautiful Barbie clothes for me too! This was a perfect post! Thank you so much! Love and Hugs Anne

Hi Sue,
Great post and beautiful photos! My mom was a wonderful seamstress, and she loved to sew -- sadly, I do not. Might have something to do with one of my first experiences on the sewing machine - sewed right through the edge of my finger - yikes!
Anyhoo, can I ask where, oh where did you find all your needle organizing things? Mine are in such an awful mess - thrown in zip lock bags ;(.
Blessings,
G

I too love to sew. I have since I was a small child, funny thing is my mom was a non-sewer! Also I am left handed so I kinda do things backwards...I love to hand sew and make things with my machine. What a wonderful sense of accomplishment! Thank you for a terrific post!

I am a lover of stitching, specially the cushions... and your this post really makes me happy, I dont know what to praise and what to left... its overall a beautiful post... likes your little needle home very much... its so cute and with a practical usage.... Crochet needle pouch is another interesting thing... I am going to follow you too,hope to see more beautiful posts...

What a beautiful post filled with imagery and memories.

This post took me back, and judging by the comments it did so for many of your readers here.

I loved learning more about this...such interesting thing you share with us.

Thank you for linking to Alphabe-Thursday.

This was such a nifty stop.