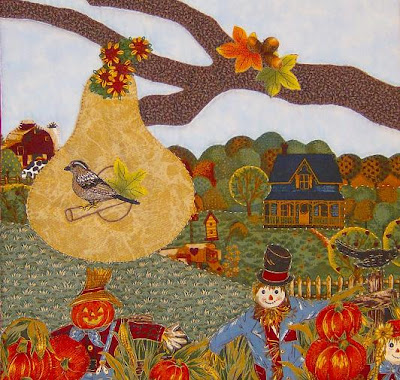 How about a Fall Quilt Block? Yep, it's OCTOBER, and the Crows are FlyIn, the ScareCrows are ScareIn and the PumpkIn's are Everywhere.

One day I found two pumpkin seeds.
I planted one and pulled the weeds.
It sprouted roots and a big long vine.
A pumpkin grew; I called it mine.
The pumpkin was quite round and fat.
(I am really quite proud of that)
But there is something, I'll admit
That has me worried just a bit.
I ate the other seed you see.
Now will it grow inside of me? 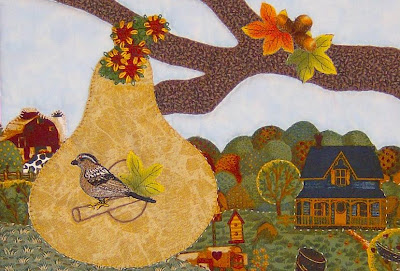 Have you made a Block of the Month Quilt?
I always wanted to do a Themed Block of the Month.
So I joined 'The BirdHouse BOM' in September 2005.
It was suppose to be a SIMPLE Birdhouse Block with just the Gourd hanging from the tree branch.
That's it...That's all.
As you can see, OverDoSue, had to add from Collections of:
Fall Novelty Fabrics
Janome Embroidery Bird Card
Janome Applique Stitches
and Hand Quilting
To the October BOM
And of course, again in
November, December and January.
I'll show them in the months to follow.

What about February, March,April, May,
June, July, August, and September?
Oh! They are on my list of 'ToDo's for 2010'.
FIVE years later...It's About Time!

PS...About the SecondSeed...I'm so relieved since I found...that Pumpkin Seeds only grow in the ground.
PPS...October is National Breast Cancer Awareness Month.
Celebrating 25 Years of Awareness, Education and Empowerment.
PPPS...SunBonnet Sue and Overall Sam are on hold...hope it's not another BOM!
Posted by Sue McPeak at 10/06/2009

CHARMING! The lovely quilt, and the poem is so sweet. I am not a quilter myself but I enjoy viewing other's woderful work such as yours.
Blessings!
Gwen

Delightful words and beautiful colours on the quilt in keeping with the Autumn season. Love it!!

Oh, Sue, I love that quilt block. I love all the details you put on it. I am in awe of any one who can sew. My mother made everything my sister and I wore, but I am afraid that trait didn't pass on to me. I get frustrated trying to get a button on without the thread getting in a knot. Now, I am looking forward to seeing what you come up with for the other months!! Have a great rest of the week and thanks for stopping by for a visit today. Vicki

I forgot to say, I loved the poem about the pumpkin seed. You have to steer clear of swallowing one of those!!

Cute poem and charming quilt block. Do we get to see the finished quilt? Love your choice of fabrics and that you added more to the square. The sign of a truly gifted person! ~ Sarah

Sarah, Vicki,Iphigenia,and Gwendolyn...Sew glad ya'll are enjoying this quilt block. And yes, you'll get to see the rest of the months. It's my challenge for each month to get them finished to show so next October you'll see the finished quilt!!! Sue

Hi sue, you have shared a wonderful fall quilt today. I do not think it is over done at all. You just added a part of your personality to the quilt. I love what you did.

My friend does the block of the month and makes the most beautiful quilts. I am a novice but can't wait to learn more.

Have a wonderful day.

What a beautiful quilt. The autumn colors are gorgeous. Wish I was talented when it comes to sewing. Thanks for stopping by my kitchen. See you on Pink Saturday.
Sam

Oh Sue, it is beautiful. I love it.

How is that sweet new grandson?

I love your fall stuff! The quilt blocks are great. I watched my grandmothers both make quilts and know the time and effort that goes into these. They are amazing. Also, thanks for the reminder of Breast Cancer Month. My mother is a breast cancer survivor and we all should work hard to find a cure.
Denis

Congrats on the new wee one, if ONLY they would stay that small for a longer time.

Sue,
Love the way you added the bird with machine embroidery. Wonderful colors.