It all started with a Weddin' Gift!  Yep, even though HiHoney and I eloped and got married in Mexico, we still had a Weddin' Shower...a few weeks after we legalized our Mexico Marriage by registering our Ole' Weddin' Certificate in the Texas County Courthouse. 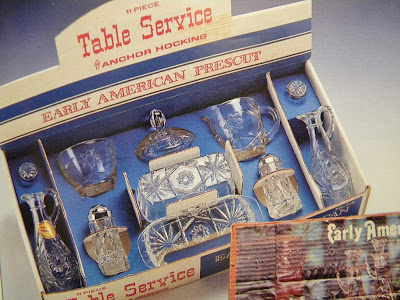 Every Bride in the 1960's got at least one.  Since then, I've collected at least a set for each of the Forty-five years we have been married....come this December.

But not one in the original box, so that makes for 90 Salt and Pepper Shakers and  Oil Cruets...more than half without the stopper.  Those stoppers always seem to get separated from the bottle. 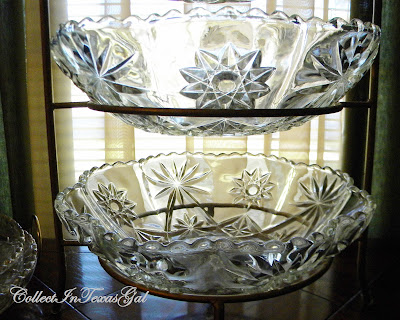 EAPC was made by Anchor Hocking Glass Corporation starting in 1960 and made through 1999.

All EAPC pieces are designated as the 700 line in Anchor Hocking's catalogs.  There were other Prescut patterns made at Anchor Hocking, but EAPC has to have the star in the design with two exceptions.

The double candle has a knob in place of the star, and the punch bowl cups do not have the star.

The most difficult, but desirable pieces to own are the Oil Lamp, 11 inch Four Part Relish Plate with Swirl Dividers,  11 3/4 Paneled Bowl and the Lazy Susan.  TaDa....TWO Paneled Bowls! 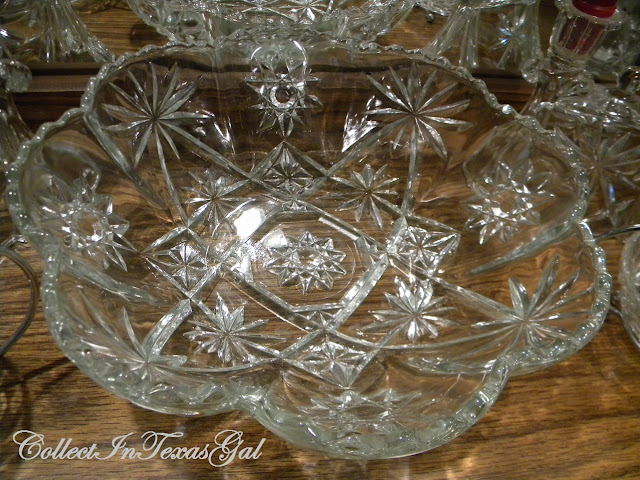 OMGosh, I looked forever for this bowl, and finally found one on Ebay.  Okay, that did take some of the fun out of The Hunt, but Bid I Did.  Now, before I tell you the Book Value, I will say that I got a deal on Ebay because the bowl was included with a random group of EAPC bowls that are NOT hard to find.  I kept waiting for the to Auction to go through the roof and my bid  made to look piddly, but it didn't happen and I won!  I don't explain em'...I just pay the twice over shipping and smile all the way to the Acorn China Cabinet.  Oh, yeah, the Book Value....$195.00...2004 Edition of Collectible Glassware from the 40's-50's-60's.  Paneled Bowl #2...Oh, What A Thrill...$25.00 at a FLEA Market...and not a single FleaBite! 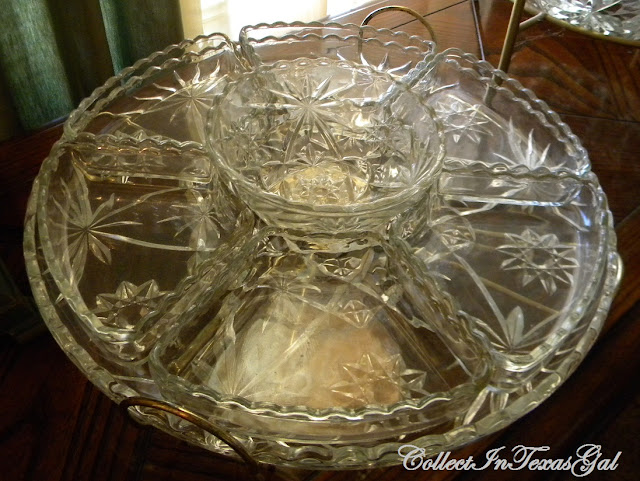 TaDa....The Lazy Susan with Rack!  That's important ya know...the RACK.  I've only ever found ONE Lazy Susan with the RACK!  Does that give you the impression that I have more than ONE?  I don't mean to be a braggart, but I have FOUR Lazy Susans with Racks.  It's all in the knowin' what to look for and a whole bunch of LUCK!  The best buy I found on a Rack was at Goodwill.  There it was...hanging on the wall like a Wall Flower....tagged for a DOLLAR!  Thank-you GW!  I use these Lazy Susans everyday!  One on my kitchen table, another by my sewing machine, one packed away for my GrandGal, and this one on The Acorn Dining Table.  A complete Lazy Susan is valued betwen $50 and $75.  It takes 9 pieces to make up a tray....with luck you can put one together for $25 by the piece....that is if you find a $1 rack! 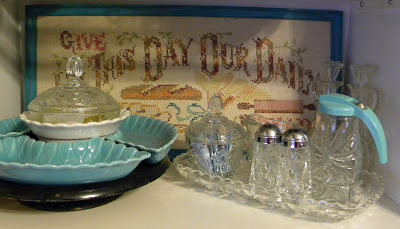 Here are some of the Table Service Set pieces on display in the kitchen.  The Lazy Susan on the table twirls the pieces we use everyday for the Salt & Pepper and Sugar.

The Syrup Jar with the Turquoise Lid is another of the harder to find pieces...I only have ONE.  Oh, and I have ONE OIL LAMP and a couple of Candle Sticks!  Show Em to ya next week!

I'm joining Linda at AlaCarte' on her Junkin' Finds Friday.  I think EAPC works for that...I sure have found a bunch of mine JUNKIN'!

Wow what a wonderful collection. I also enjoyed the great information you shared with us. I learned a lot and will be on the look out for these wonderful pieces. Thanks for joining Junkin Finds Fri!

What a fantastic collection! My mother has a collection of EAPC. Some came from gifts and the rest is what she inherited from my grandmother. Come to think of it, I think I have a few pieces in one of my cabinets and I recently purchased an oil cruet. I never really thought about the history, I just liked the pattern. Thank you for sharing the information about EAPC!

It sounds like you really enjoy the hunt. I like that they are made in the USA. Such a pretty collection.

Wonderful collection - thank you for showing. I have a Pink Glass Collection, and also Anchor Hocking milk glass, and have established an Anchor Hocking (Fire King) Soreno glass collection. I shall have to find a photo, but I have a pink EAPC platter.

What a lovely collection you must have. Thanks for sharing. I have a few pieces from my mother. I must get them out and see what I have. Love the blue in your kitchen.

I didn't know anything at all about these pieces, so found this very interesting. I think there's a fair amount in mum's cupboards and I'll have to have a look when I'm east next week.

Fun post, Sue. I know my mom had pieces of this, but didn't know any of the particulars. Thanks for sharing. Sounds like you have a great collection of these pieces. The "hunt" is always fun, but you obviously know where to look. ;-)
~ Sarah

Just stopping by from Junkin Party!! What gorgeous pieces! I just saw some at a garage sale this week. I have seen that set at the antique mall, too!

I collect EAPC too! Have for years. It sure makes a beautiful table. I had to let go of some of the bigger pieces when we moved but I still covet the oil lamp and the egg plate. I bought the lazy susan with the metal tray off of eBay once and it came broken. I was heartbroken too! You really scored on that paneled bowl. Lucky girl!~Ames

Love your collection. I have a few pieces as well and use them daily.
Visiting from Junkin finds, Annette

Hi Sue!
I know I haven't stopped by for a loooooooong time! Your blog looks terrific!
I have some EAPC; I started with a deviled egg dish. It blends nicely with my Franciscan "Dawn" China.
Have a great weekend!
Leslie

This was so informative-thanks for sharing!

Wow, that is some collection...love the lazy susan.

Sue,
My husband and I stopped at a little outdoor flea market near Biloxi, MS this past weekend on our way to the casino that we stop at every time we go and while we didn't do so well at the casino... but boy did I hit the jackpot at the flea market!!!! I have a rather large collection of EAP and am always on the lookout for a deal. We were nearly at the end of the first isle when a stack of bowls caught my eye. It was on the bottom and as I got closer I thought my eyes were deceiving me! I casually picked it up thinking that it would have an ungodly price tag and was amazed to see that it was marked $8.00!!! It was all I could do to keep a straight face, and like you...I just smiled all the way to my truck, although I must say I did feel a wee bit guilty! Kerri from Livingston, LA

Sue,
This is Kerri, from LA again...I was so excited I forgot to put what kind of bowl it was...silly me!
It was the 11 3/4" paneled bowl.
Kerri from Livingston, LA

Hey, I was doing a quick searched on the EAPC Paneled bowl and your website here popped up. I just wanted to say I collect EAPC dishes too and they are my hobby as well. I love the collection. My mother got me into it. We almost have every piece to the collection, including the Paneled bowl (which I just got for $83.00) crazy right???? I also have the one oil lamp, I would like to find another (especially for the price I found it for at a flea market, $60) Anther rare piece is the tiny salt and pepper shakers which I found on ebay a couple of year ago. Im happy I came across your page, its great hearing other people out there collecting these same beautiful dishes :-D

I recently obtained a set of Prescut with over 150 pieces of all kind of bowls and snack sets, relish dishes, and an entertainment set with small wine glasses, and wine decanter that is much older than the Prescut. I am going to sell the Prescut as a whole set and the older one that is so rare I cannot find an example online as a separate set.

What should I ask for the Prescut set all together?