A Family Heirloom in the making! 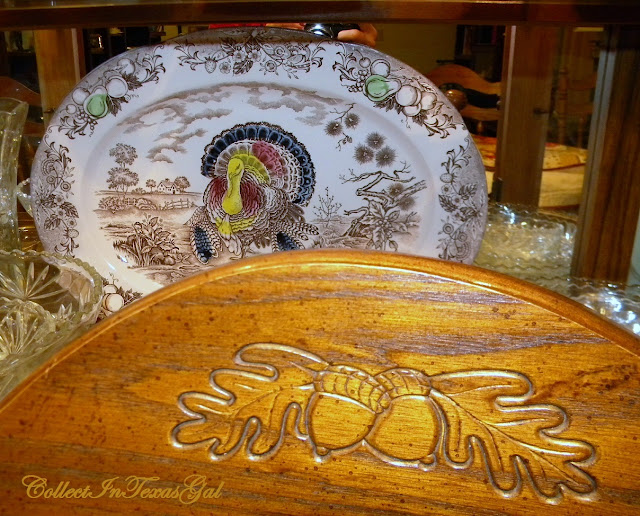 The Acorn China Cabinet was a Twenty-fifth Wedding Anniversary Gift from HiHoney!
Along with the cabinet came the Table and Six Chairs.
All very Traditional in Style with carved acorns on the chair backs and on the arch of the cabinet.
Over the years, the China Cabinet has made many moves and held many collected treasures.
During this month of November, I will share some of the Acorn China Cabinets Treasures! 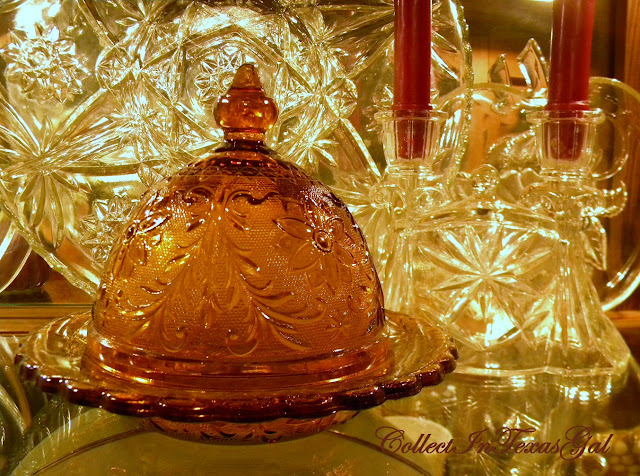 My one and only piece of Sandwich Crystal  was made by Anchor Hocking glass company between 1961 and 1964.  That was when they made the color Desert Gold which is now the most prevelant color out there and the least expensive.  Except for the 9 oz. footed tumbler...it's valued at $275.  I don't have it!  I have this Domed Butter Dish/Cheese Ball Server!  I'm not sure where it came from or why I've kept it, but it sure makes a nice accessory piece to go with the other Anchor Hocking Glass Ware that I have collected since HiHoney and I married in 1965.  The Double Candle Stick and the Platter shown behind the DB/CB Server are called Early American Prescut.  Anchor Hocking made enough of this stuff for every Bride in America to stock their Acorn China Cabinets....which I did!  I'll be showing more of this collection through the month of November and probably into Christmas....next year! 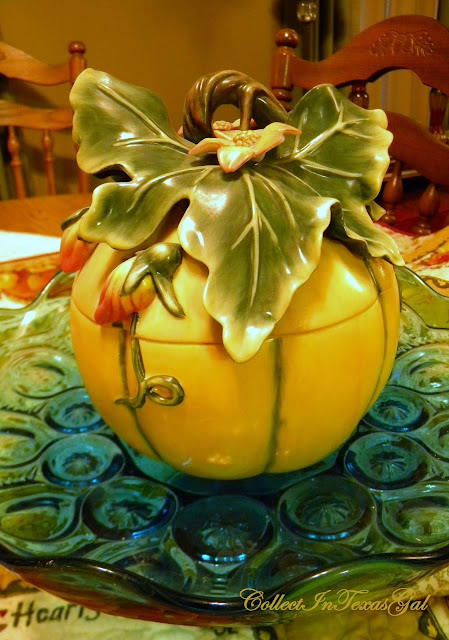 I do have a few pieces of Semi-Rarity.  Featured here is one of the five pieces of a set made by Fitz and Floyd who are known for their beautifully crafted and detailed ceramic collectables.  Not yet old enough to be called antique...just collectable.  The real piece here is the Petit Four Stemmed Plate  in the Moon and Stars pattern in the most desirable and valueable color.  The Acorn China Cabinet and my Kitchen Cabinets will be showing more of the Blue Moon and Stars. 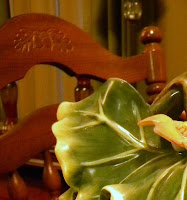 Yes, I think they are Family Heirlooms in the making!

Hi Sue Sweetie...
Oh my gosh, what a beautiful share. I love the acorn design. I have never seen it, and what beauty it holds. The coloring is just gorgeous.

Love the dishes. How pretty they look in the cabinet with all the colors. They just twinkle. I simply adore the turkey platter. That really grabbed my little ole heart.

Sue thank you for sharing your 25th wedding anniversary splendor. It is SO gorgeous. I can see why you love it so much. I would be thankful too.

Have a gorgeous Tuesday sweetie. Many hugs and so much love, Sherry

I love your hutch and always fun to see someone's treasures. I love the doomed butter dish!

I have collected so much of the EAPC I finally had to sell some ot it. I never did get to buy the double candle sticks or the oil lamp or the elusive egg plate.It does make the most beautiful table.~Ames

It's a beautiful acorn design - no wonder you treasure it and the lovely things you've collected to fill it.

I have never seen the acorn design. That is lovely. I always enjoy seeing everybodys pretties. I'm sure you set a beautiful table, especially for the holidays. Looking forward to that.

great pieces...I love Thanksgiving...it is such a overlooked holiday...your acorn design is beautiful...

Love the acorn design. Funny story about acorns. While in KY my sister and I searched under oak trees for acorns that were complete (top and bottom). I had them displayed on my dining room table with my embroidered leaves. On Halloween GD #2 was visiting and I saw here over at the dining room table. Needless to say my acorns are no longer in one piece. I could have collected all kinds of tops and bottoms! I LOVE HER ANYWAY.

Cool! You are so knowledgeable when it comes to collectibles. I love looking at your cabinet treasures!

Thanks for sharing your lovely treasures and a peak at the acorn china cabinet. Your dining set is the real treasure. By the way I realized after I posted my comment on the anniversary post, I know it will be a few weeks before the actual day. I read it again and 'lightbulb' Ha! My wishes will be early and that's ok. Smile.