G is for GOLD and GIFT...On A Silver Anniversary 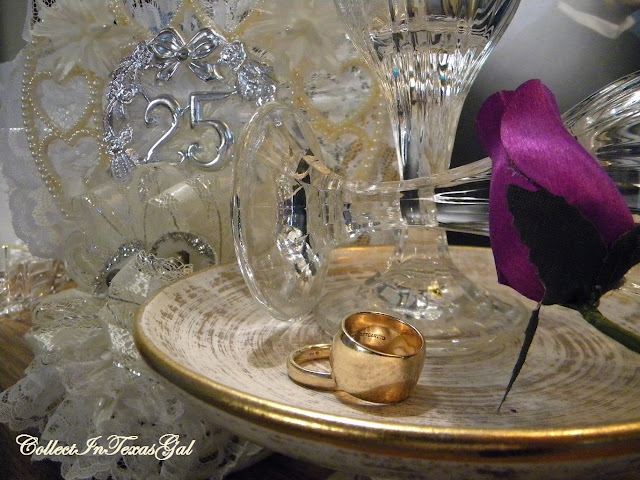 It's true...I Struck Gold on my Silver Wedding Anniversary!
Really, if the truth be known I Struck Gold on December 27th, 1965 in Juarez, Mexico when I married HiHoney!
Yep, we eloped!  I posted about that last June...Juno, The Goddess of Love, Ole'.
If you go there you'll read how HiHoney and I were Legally Married in Mexico, but Livin' InSin In Texas!
That was Forty-Five years ago...come this December 27th! 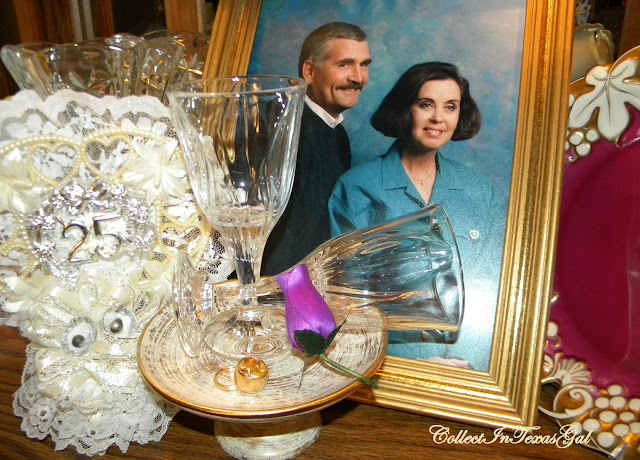 Here we are in 1990 on our Silver Wedding Anniversary....Twenty years ago...framed  and posed in the Golden Oak Acorn China Cabinet!
Only fitting...as the Acorn China Cabinet, Table and Chairs was my
Twenty-Fifth Wedding Gift from HiHoney.
See I told you he was worth his weight in Gold....well okay...Golden Oak...and it really is Heavy!

During the Month of November, I am featuring 'The Acorn China Cabinet' and the Collections it has held during the last Twenty years.

You will see some of The Collection if you visit Juno, Goddess of Love, Ole'.

The Desert Gold Domed Butter Server is featured in the Header and in the post below...The Acorn China Cabinet...A Family Heirloom in the Making.

And, did you know that the Month of November is considered the Golden Month?  Well, at least by this Girl Raised In Texas....so, here's a Golden November Poem and a Golden Pumpkin for your Alphabe~Thursday Collection.

I'm sure you'll find more Golden Words when you visit Jenny and the Rest of the
Golden Gals for more of the Letter G.

PS...Just in case you don't have time to read about the Legality of Our Mexico Weddin', I thought I'd better let you know that in 1965 Mexico Marriages were not recognized in the State of Texas....until the Mexican Certificate of Marriage was Registered in a Texas Courthouse.  HiHoney and I registered ours a week later.  Whew!  It would surely be Scandalous...our Celebrating Our Golden Anniversary of Livin' InSin!

G'day Sue ~ Your first pic just melts me .. I love those rings entertwined ... you both are beautiful in the picture ... how rich & beautiful a share.

PS Check on Saturday for our weekly November giveaways ~

Hi Sue! I am happy to be checking in again and see that things are well with you! I love your stories and pictures and the tale of the wedding in Mexico.

Ah congrats to you and HiHoney! You look so happy!

You are so cute...lol....Love your HiHoney and that gift is beautiful.

Good grief, were y'all ten when you got married? :) He's a handsome dude for sure and you are just too too cute! Happy Anniversary Sue!

Congrats too! You both look so happy!

Loved your post script... it made me smile. Congratulations!
Dana

there is nothing more heart warming than a long lasting loving marriage ... congrats to the two of you!!!

Congratulations on a long and happy and sinful existence! I'll bet it just adds a little more spice to the whole thing! lol....

Lovely memories . Hey I went to Winnipeg on December 27 2008 :P . We should have eloped then . I feel special now being called a golden gal.

This is the sweetest and most precious post. It was such fun reading your story. Thanks so much for sharing. CONGRATS!

Congratulations! I'm glad you're legal and impressed your marriage has lasted all these many years! You both must be special people. :)

Glad you made it legal. It sounds like it has been a wonderful 25 years.

You are much prettier now than way back then. It's true that we age like fine wine. Congrats on the anniversary!

Congrats on the Anniversary! My grandparents really did live in sin for about a week. They inadvertently crossed county lines, which nullified the marriage. They hurried and got re-married in the proper county, but my grandmother always used the first date as the anniversary.

Great post, I love it! The post office had stamps with the gold wedding bands. I bought them because I liked that idea. Something classic and reasonable. You are one groovy gal and GRIT! I love listening to your stories. Goodness!Thanks Anne

Fantastic that you built such a solid long lasting marriage. What a special and beautiful relationship to have.

In french we would congratulate you for 25 years of prison, lol !

The whole "living in sin" aspect of it makes it all the more memorable and special.

Time is a wonderful thing, memories made and remembered. Congrats and many happy more years to you both!

Love the rings, so very spiritual to me.

Sweet! I love it that you eloped!

Awww... happy anniversary! Great picture of you all!

Happy anniversary! Sounds like you two are a "golden" pair!

What a lovely visit we enjoyed this week on our stop here through Alphabe-Thursday's letter "G".

Love your stories and pictures and treasures.

Thanks for the smile and sharing your happiness with us. 45 years in December! That is some wonderful accomplishment.

You have such a wonderful golden love story! Happy 45 anniversary in advance.

I love your 25 anniversary vignette.

I love to read about people who are actually still happy and in love after 45 years! Some things were just meant to last a lifetime!!

I second Judie's sentiment. It is truly wonderful that you and HiHoney are still together and in love. Congratulations! La

I just had to go back and read about your wedding. So when did Texas change that requirement? I'm assuming it no longer exists. Enjoyed the story and your family heirloom in the making.

Congratulations to you and Hihoney Sue. I love your elopement story. How romantic. I think you both got a catch. A very sweet love story.

The butter dish is beautiful. Now I am scrolling sown to see the posts I have missed. I can't wait to see the acorn china cabinet. Smile.

Bill and I were married in 1963. Fifty years is coming fast. It is hard to believe all those years have gone by.

Sending you wishes for many more years of happiness.
Hugs, Jeanne

Glad ya'll made it legal and have had such a wonderful marriage thus far! My parents celebrated 52 years together in June!
Thanks for stopping by my blog!

Happy 45th! I loved your Mexican elopement post - thanks for posting the link.

Great post for G. I love all the visuals. Your tale of sinful living was a real treat.

Gorgeous "G" memories :o) I am heading over to read your tale of your Mexican marriage :o)

A happy early greeting for your upcoming Anniversary!

Blessings & Aloha!
Once again...I'm behind, but catching up on blog reading...hope you have some time to stop by mine.