The Planner for 2010...Plannin On Pink Saturday...ForSure! 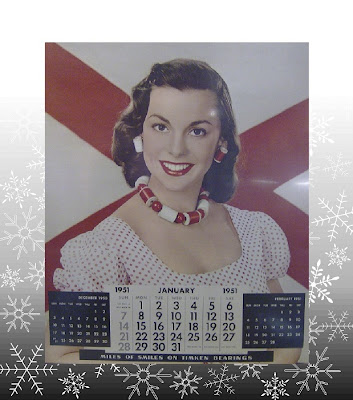 Have you noticed how the New Year Calendars begin to hit the market places earlier every year? It's not like the year doesn't 'FlyBy' quick enough these days that we need to hurry up and wait for the next one. I usually get a 'Refill' calendar for the 'Planner' Thingy I carry in my purse.
You know the one you vow to keep track of those important dates for the whole year, and around May or June you find it in the bottom of your purse with the last entry made on January 15th, and because it's been lost there in the deepest, darkest and dirtiest Secret compartment of your bag, the pages are stuck together, crumbled on the edges and filled with crumbs of who knows what.
That's why I don't 'Resolute' about calendars anymore! 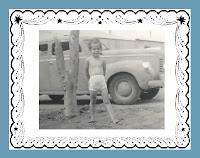 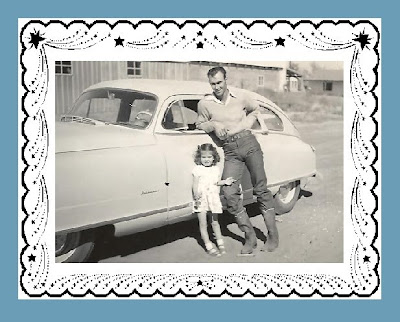 So rather than look forward this January, I thought I'd take a look back at a few January's of Yesteryear.

Last month I began to notice Calendars in the Yesteryear Places...that'd be Antique, Thrift and Flea Markets.
Here's one of my favorites, so let's go back to January 1951.

Yep, that's this GRIT and my Dad...without his Stetson.

Probably not January, but definately in West Texas beside Dad's Pink Nash Rambler.  Aren't those Boots a Hoot? You can bet they were Tony Lamas and bought in El Paso, Texas.
Girls Raised in Texas in 1951 absolutely DID NOT run around in their Panties! What was my Mama, thinkin?

Since she wasn't a girl raised in Texas, but Iowa, she didn't yet know that was a 'Texas NoNo'.

Either that or I decided it was too hot for clothes and stripped right there in the front yard. 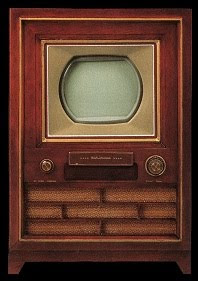 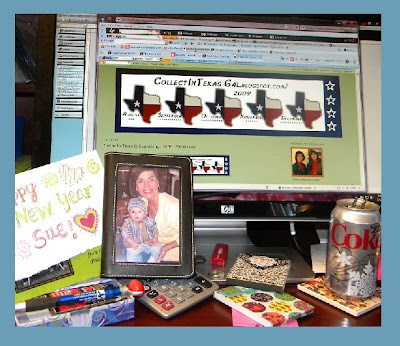 Well, Ya'll a few changes have occured in the Last 59 Years!
Here I sit with my 'General Purpose Computer' with a screen bigger than the 195l RCA TV and in Amazing Color. Thank-you 2009 Santa! I love Windows 7, Diet Coke, Baby Bubba, Blogging and 'Pink Saturday'. 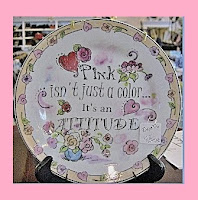 Since Beverly at How Sweet The Sound has extended our 'Pink If Ya Wanna'...I'm callin this my 'First Pink Saturday Post of 2010' for Pink Saturday January 2,2010.

So, Ya'll make good use of YOUR General Purpose Computer and Click HERE on mine to visit Beverly and the rest of the Pink Saturday Participants.

You are so funny! I was born in 1950 and I have pictures of me in just undies also...must have been really hot for my Mom to let me play outside like that! Texas Hot for sure!

Love love love the old photos!! I think every Texas baby at some point has ran around in their unmentionables. lol! Happy New Year, and hopefully soon I'll be back in the Pink Saturday swing of things!!
Hugs ♥ Teresa

There are pictures of me im my best Texas "bloomers" as well. Knowing me and my attitude, my mama didn't dress me that way..if I got hot in that Texas sun..*and I did), off came the clothes. *sighs. Thank God I grew out of that phase quickly..
Happy Pink Saturday and happy New Year..from one GRIT to another

Hi there ~ Love the old calendar and photos - they're great.

I've been a follower for a while but had missed some of your recent posts so I went and absorbed all things Texas - which I loved because I'm Texan and have never lived anywhere else. Lucky me! Except for the sweaty summers!

Love the joke regarding the copper wire -laughed out loud!

Have a Beautifully Blessed New Year...

Hi Sue!
You have to quit drinking that Diet Coke. It's poison. Why don't you switch to ice tea? Isn't that what GRITs like? I am going to play Pink Saturday. Now I know what it's all about, thanks to you!

Morning Texas Gal, Happy New Year to you. Your post is darling and I look forward to sharing more of them with you in the new year.

Happy New Year!! Great Post, I enjoyed it very much.

I am having an APRON GIVEAWAY. Check it out... http://copingwithacidrefluxandulcers.blogspot.com/

Awesome blog! Happy Pink Saturday to you from me! Thanks for joining me on my site. I am itching to have a giveaway and I am hopeful it will happen soon! Your site is wonderful. I have been very honored to meet so many new and wonderful folks. Thank you for sharing. Thanks to beverly for starting all this! May 2010 bring you much success and love and good health for you and yours.

Happy Pink Saturday My Sweet Friend...
I love this post. All the oldies and goodies you have shared. How very precious that is. I love the pic of you and your Dad by his Pink Nash Rambler.

Now for a girl raised in Texas who wasn't supposed to run around in her panties, Uh Hum?? Oh I see Moma was to blame? Okay, okay just this once. But I adore the picture sweetie, how precious is that.

I love the pages in your daily planner. They are so pretty. I am going to have to get some new pages, as I am tired of plain in mine. I also see that you are going to have a birthday the 20th of this month. Oh how exciting!!

Stop by and say hi sweetie. I am having a give away and I would love to have you sign up. Panty Girl or Not. Love ya sweetie.

Country hugs and much love, Sherry

What a great post! You were a very cute little girl! I thoroughly enjoyed reading this! Happy New Year and Happy Pink Saturday!

Came over to look after your visit. love the old pictures. I just pulled my calendaer out to put those important dates on it ,less I forget.
My friend and I were saying that years ago that calender giveaways were a sure thing from merchants but now we have to go buy one.

Happy Pink Saturday to you

Happy New Year!!! Thanks for stoppin by this morning...You're sooo right about the panties...it extends to babies too...my mother was agast one day when some harried and hurried mama brought her baby into the grocery store "in nuthin' but a diaper!"...(cloth in those days) and she pointed it out to me just in case I might ever be so inclined...well, the lesson was not wasted and no baby of mine ever appeared in public so under-dressed. I must admit I still recoil when I see a little one's disposable diaper as his only covering. funny the things that get stuck to us and the things that don't...
Good luck with the calendar...I use the same style from Mary Engelbreit every year...about 4x5; it opens to show a month at a time and comes in a little heavy cardstock pocket so it holds bills and grocery lists and dentist cards. and it's flat and thin...I can't keep a planner organized...too many options and pockets.
I'm off to visit the knitting site you mentioned to Sherry earlier. Have a great New Year.

What a fabulous pink memory post! I just love everything you've shared here today and I'm so glad you came to visit! I haven't been out and about as much as I'd like this last week as we are still celebrating holidays and birthdays...three more granddaughters' birthdays coming up in January! Happy New Year! Hugs, Coralie

The picture of you as a mini-GRIT running around in her panties made me laugh aloud. You were cute then, and you're still cute.

Give that little Bubba a big hug from he. He is adorable.

I was born in 1952. Tupperware parties?! Wow! They've been around a long time.

Oh my Goodness how I love that plate! You are still as adorable as when you were little...Happy New Year and Happy Pink Saturday Hugs Grace

Happy New Year from our house to your house. Your cyber tour of the past was a g-r-e-at idea.
Joyce, IL, USA

Hi, Sue,
Love that picture of you and your daddy!! And yes, that is certainly West Texas. I am not much on keeping a planner either. I have a little mini calendar I keep on my refrigerator, and that is enough planning for me (at least I know what day it is!!) Wishing you and your family a joyful New Year in 2010!! Vicki

Hi Sue, thanks for stopping by my blog and making such great suggestions for my office cleanup..i am going to put those drawers IN the closet, that or figure out a way to cover them up..but then if I put a curtain there it will block the light from the only window in the room. hmm..no the closet sounds good..
Love your trip down memory lane..thanks!
Barb

Great fun pictures. I know I will always have a good time here at your post. Blessings!
Gwen