KickinOff The Party...Three Posts In One or One TooMany Candles! 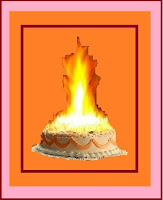 If this is your first visit to the WeekLong Party, then you'll want to start at Cake #1. 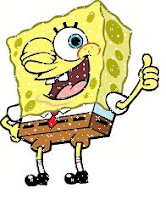 "You Gotta Have A Theme, Nana! How about SpongeBob?"
...suggestion from 8yr. old GrandSon. 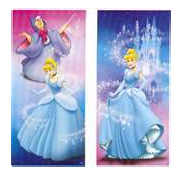 "Paleeeze, SpongeBob??? Nana's too old for SpongeBob and girls don't do SpongeBob. Nana, do 'Cinderella'. I'll be Cinderella and you can be 'The Fairy GodMother"

"OMG!!! That is SoNotCool!! Anyways, Nana needs to 'GetWithIt'...IT IS Like the 21st Century!
NANA, Pleeeeeze, do 'NewMoon'!!! I'll be Bella and You can be....mmmmmm!
There's really not a part for you, but Ooooohhhh! Jacob is SooooooHOT!!!"
...suggestion from 15yr. old GrandDaughter.

All excellent suggestions, My Darling ThreeThoughtful Grands! I'll think on it...I mean...Like...I do wanna be Funny like SpongeBob and Magical like Cinderella and definately Cool and WithIt like Bella and Jacob!
I'm just not sure about the Vampire Thingy or the Fairy GodMothers Frumpy Outfit or SpongeBob's SquarePants! 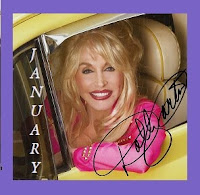 First, I'd like to Thank the Commenters from Post#l for their Theme Suggestions.
Thanks Cat The GypsyNurse, for suggesting a Glamorous Movie Star, PomPom for a Musical Video, and AlaCarte Linda said to 'PickOne and HaveFun'!

Now, you might think Dolly and I are Nuthin~ALike, and you'd be Right...in some ways.
I'm Tall and Dolly is Short. Dolly can Really Sing and I ReallyReally Can't.
Dolly's Blonde and I'm Brunette...sorta!
Dolly has alot on her Chest and I just Get Alot Off Mine!
So here's the ways we are Some~ALike.
First, her name is Dolly and I have a Dog Named Dolly.
(please don't tell Dolly I said that, she thinks she's a 'Girly').
We both have a 'Coat of Many Colors'...her Mama made hers and I got mine at the Salvation Army Thrift Shop.
Both of us are in the Entertainment Business. She's in Movies, on TV and has a DotCom, and I write a Blog!
Then there's the GRIT Thingy! Yep, we're both Girls Raised in T States.
She's from Tennessee and, Ya'll already know I'm a Texas Gal.
Finally, Dolly and I are both January Gals!
Yep, her Birthday is A Day and A Year before mine.
So despite a few minor differences, I think we could pass for Sisters.
What'd ya Think? 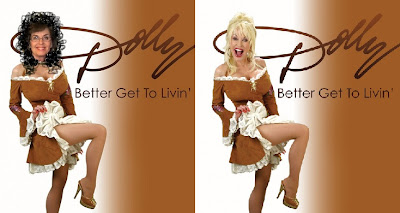 PS...I haven't forgotten about the questions and comments from at least 4 of you who said you'd come to the Party if there was going to be CAKE! THERE WILL BE CAKE!!! Then there was a question about what to wear! I'll Ad~DRESS that in BlogginBirthday Week Post #3. See Ya'll then. Oh, Dolly and I are up for 'Entertainers of the Year' and we'd really appreciate your Vote and Comments!

So, I think I'll start with what I'm for sure 'Not GoinToWear'! 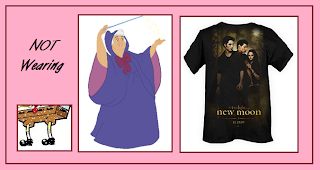 Now, if YOU would like to wear one of these Outfits, Be My Guest, but BeWear...You'll be dressed just like Two of My Three Grands! Number 3 is wearing Cinderella's dress. So if 'YaWannaWear' the FairyGodMothers Frumpy Outfit...it's available! 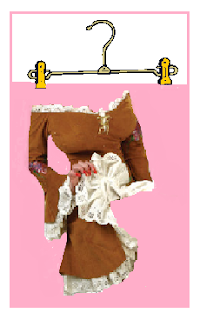 Dolly left her Dress for anyone who has the Chest,Waist and Legs that will fit without doing any more alterations. I had a heck of a time getting my BigHairDo into it! 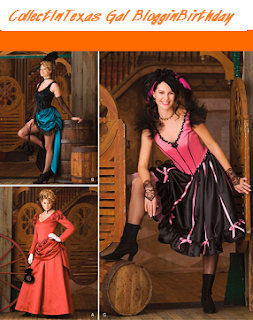 Thanks MizMollye for this suggestion...I'm LovinIt...Which one do you want? I know you've been 'Dieting', and I'm thinkin you'll look great in the Pink & Black Number! 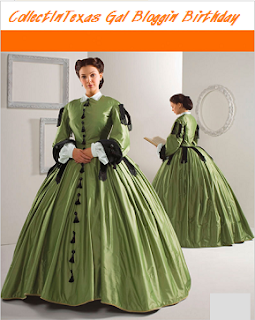 I've always wanted ToBe Scarlet! What GRITS Gal wouldn't! So, here's your chance, all you GirlsRaisedInTheSouth to wear a FrockMadeFrom Tara's Drapes! Sorry Ya'll, Rhett is not available at this time for the party. That Rascal is tied up at Miz MollyeBelle's Place...maybe she'll bring him along when She's Comin Around The Mountain! 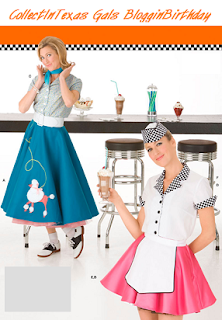 Susan at Art of Mine suggested a 50's Theme and Outfit! It's another Favorite of Mine, afterall I was a Teen in the late Fifty's and Loved American BandStand, Fonzie, and Grease! 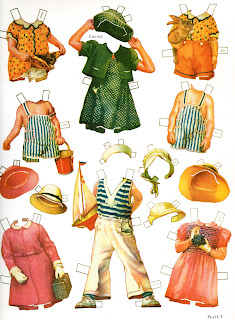 I know many of you are Vintage Collector Gals, like me, so here's some outfits you can just cut out and fold the tabs down over your shoulders and your GoodToGo! I loved PaperDolls and I'm sure I received them for lots of Birthdays! I wanted to be sure and have something for Denis at RubyGrace's to wear, and I think he'll like the Sailor Outfit.

You know, one of the great things about going to a Birthday Party in the Virtual World is you virtually could come in your 'Original Birthday Suit'.
I've thought of that, but I probably would have to cover this Sixty-three year old Original with a GrannyGown...I know some of Ya'll have one of those WebCam Thingys....Whata Shocker!

We'll ya'll, I hope I've Ad-Dressed the Dress Issue for the Party! And even though I still haven't 'MadeUpMyMind' on WhatToWear, I can definately say that I will have the Rollers Outta my Hair!

PS...I'm sure some of YOU are Faster Decision Makers than me. So, PickQuick on one of these Party Dresses and I'll SeeYa at the Party!

Will there be cake? As long is there is cake I am ready to party!

I am with Dapoppins..
CAKE CAKE CAKE!!
But I would go with a Hollywoods Starlets type theme..
Show your regal self!
Show your glam!
Get your Bette Davis, Garbo, Taylor, Deneauve groove on!
xo
Cat

I love parties! I love Birthday's (especially my own, lol) and so I'm ready! Pick and theme and let's have fun with it!!!!

Happy Birthday to you too. You are a hoot...love this post!

Your needle work pieces are beautiful. Good luck with a theme for your party. Whatever you chose, a party is still a party!! Thank you for your lovely comment on my post. Rosie

You are so darn cute & funny! I'm coming to see you as long as you have cake! LOL! Love to you today and always and Happy Sunday to you!

Let's see . . . how about a cowboy birthday party? Or a chili cook off . . . or a video of Sue spinning plates. Marching band music for the major majorette? Silly. You'll come up with something very SUE-ish!

And imagine having all that help too ;-) It's a Ye-Ha Birthday bash for sure!

What fun to have a blogging party. Do we all get to dress up? Are you revealing your age? My Word Girl.....Too Much Fun ! Let the party begin, Glad to be invited.
Yours Truly, Meg

Oh Sue...I think your birthday should have a 50's theme with pink poodle skirts and lots of crinolin too...umm is that how you spell it??
Anyway Whoo Hoo to YOU Happy Birthday!! Love you
Susan in Georgia!! P.S. A large pink birthday cake with chocolate filling inside would be very nice too! Would you like me to make one big enough for all of us to share??? :)

I think it's funny how every age group have different things one their mind and insist upon it :-)Now, as to Dolly, well you sure compared perfectly the both of you. There really is no question about it LOL

Oh Sue, you're a scream! Your blog is as creatively and carefully crafted as all the other great crafty/needley things you do! And you and Dolly? Practically twins!
G

Sue, you and Dolly could be twins! Such a cute post. I'm giggling as I type. Thanks for the birthday wishes. I'm having a delightful day!!!
Birthday hugs to you! ~ Sarah

Hey Birthday Girl, I say A Famous Cowgirl or Gunmoll type gal like maybe a Bonnie Parker. Whoever she is I think she should tote a sidearm and wear boots and have a western hat and chew gum. For the cake, How bout a cake covered with Texas Millionaires and a little whipped cream.

Wish I could spend the entire day looking but I'm sneaking a peak while working.

O.K. I admit you two look sooooo much alike. It must be the January birthday thing. I'm anxious to see what outfit I will pick out for the big event. But I'm more interested in the CAKE!

Happy Birthday-I wandered over from Linda's blog. You have som many cute visuals and a fun sense of humor! That is what keeps us young! Can't wait to see!--another GRITS girl~~Susan

Maybe a pajama party. My DH gave me some lovely camo ones for Christmas. (He's the hunter in the family) They really are comfy and I could wear my fuzzly white slippers. I'm for sure coming in my p.j.'s. Hope no one minds.
What a wonderful party you are planning!!!!