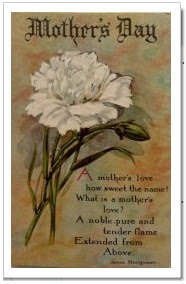 A Mothers love, how sweet the name!
What is a Mothers love?
A noble, pure and tender flame
Extended from Above.
James Montgomery...Mother's Day Card...May 1914

The Modern holiday of Mother's Day was first celebrated in 1908, when Anna Jarvis held a memorial for her mother in Grafton, West Virginia.  She then began a campaign to make 'Mother's Day' a recognized holiday in the United States.

In 1914, the second Sunday in May was officially declared 'Mother's Day' in the United States, and was adopted by other countries and is now celebrated all over the world.  In this tradition, each person offers a gift, card, or rememberance toward their mothers grandmothers, and/or maternal figure of mother's day. 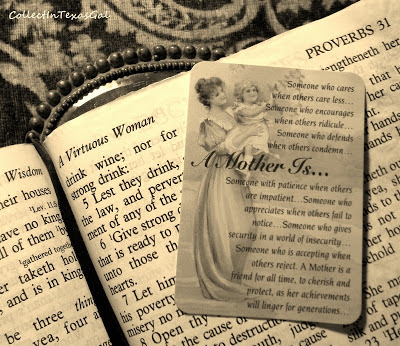 ﻿
'A Mother is...' is a card from my Great Grandmother Martha Jane Marley Carroll's Album.
It was tucked in behind a photo of her mother, Mary Josephine Marley Leatherwood, my 3x Great Grandmother.
From this Mother~Daughter line descended my Paternal Grandmother,
Effie Estella Carroll Pittman.
Her marriage to Columbus Chapel Pittman from Cobb County, Georgia,
merged two Southern families whose roots have been traced back to
Colonial America's Thirteen Original Colonies and the First Generation Pittmans born in America
John I. and Mary Polly Rowe Pittman.
You are invited to read 'My Mother's Day Tribute' to my 5xGreat Grandmother
Mary Polly Rowe Pittman
A Mother Is...Someone Who Defends
Posted by Sue McPeak at 5/12/2013

Love the words about moms. Your ancestry research is amazing! I love the Texas Our Texas quilt.

How sweet to have the card tucked in with a photo.

Very sweet Sue. Hope you had a wonderful mothers day :)

So interesting...love anything old like this! :) What a treasure! :)

I hope you had a great Mother's Day! It is always good to visit here as you share such good things! Thanks!