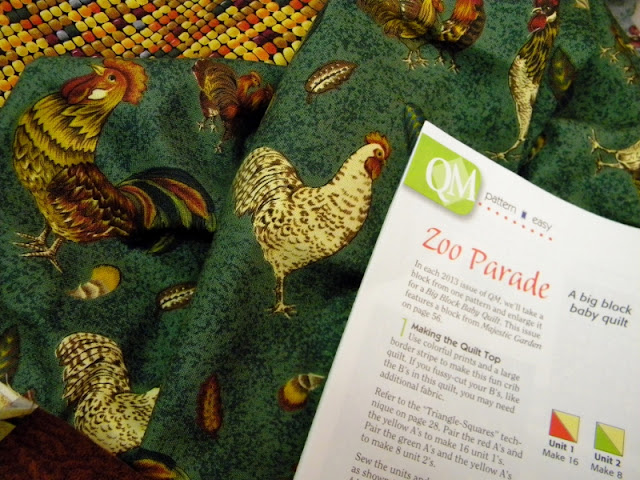 One of the advantages of having a magazine subscription is getting it in the mail BEFORE it hits the Newstand Magazine Racks.  My March/April QUILTMAKER issue arrived several days ago and Wow...it's only the first of February...a month early.  I still have Works In Progress from the January/February issue.  I talked about them HERE.  Not that it matters...having WIP's that are UnFinished or still in the planning stages...when it comes to STARTING ANOTHER NEW project. 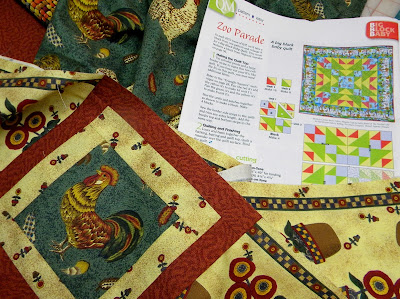 I couldn't wait to make the Big Block Baby Top that is one of the patterns in every 2013 issue, and even though the fabric I'm using is not about a Zoo Parade and not destined to be a Baby Blankee, it's close.  What really caught my attention about this pattern was the idea of using a Border Print for the outside border.  So, I went digging in my 'Stash' and came up with the Flower Pot Border print designed by Debbie Mumm 'BackInTheDay'...like the early 1990's.  There was just enough for background and borders...if I finagle a few corner blocks and insert blocks around the flower pot border. 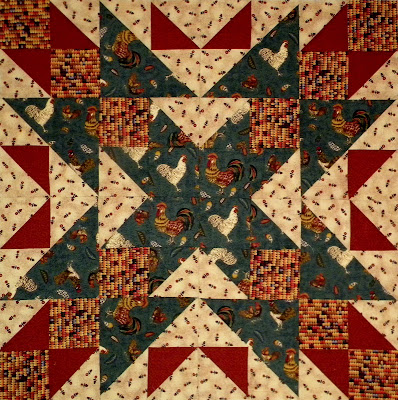 Here's the center piece of what will be 48x48 when the borders are added.
I'm still finagling around with the borders.
Isn't that a funny word...finagle?
I'm thinking I'll try and finagle this quilt onto my round kitchen table or maybe
onto YOUR round kitchen table.
Yep, I think it will end up in my ETSY Store... A Quilt Store and More!
Check it out...Link and Thumbnails on the SideBar.
Posted by Sue McPeak at 2/06/2013

Sue you are so sweet and talented! I love your quilting projects!