Oh My Blue Moon and Stars and Lunar Eclipse 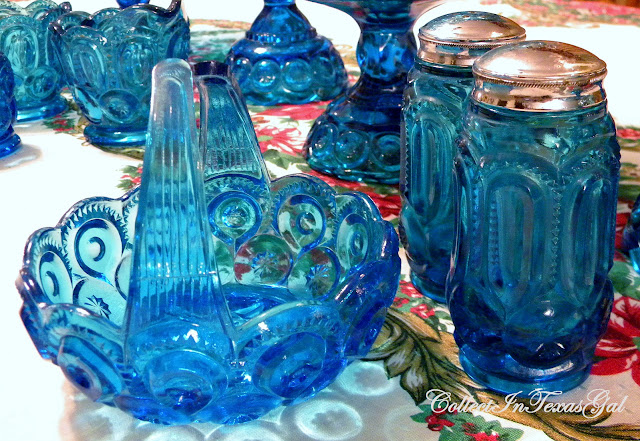 The  'Once In A Lifetime' event of Winter Solstice and the Lunar Eclipse coinciding for the first time since 1638 on December 21, 2010
had this Texas Gal looking at the Night Sky and the Acorn China Cabinet.

I decided to let the Professional Photographers Shoot the NightSky Moon.
Lunar Eclipse 2010: See What You Slept Through
National Geographic Daily News 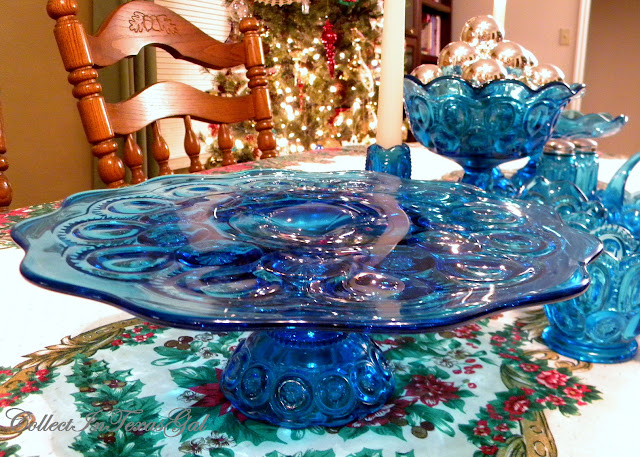 Although, I've collected Moon and Stars in Amber, Green, Clear and Red this color Blue is my favorite.
Besides the pieces featured here, I have the Complete Canister Set.

The moon was perfectly positioned in its passage, so that my daughter and I lay down on the floor and watched the eclipse through the skylights - lovely!

These are beautiful Sue! That shade of blue is so lovely!

I didn't get up to see the moon, sorry I didn't now that I see the pics. It looked spectacular!~Ames

Beautiful blue dishes! My favorite!!
Great pictures of the moon! You will have to add them to your memory album so you can remember in the years to come that you got to see it!

Your blue moon and stars glassware is beautiful!! We had clouds, so no lunar eclipse was visible here. But two of my sisters (they live clear across the country from me) saw it.

To my fellow Texas Blogging Gal, I hope your Christmas is filled with joy, peace, and love.

Those are gorgeous. The dishes I mean. I showed hubby a picture and said that's what I want to look for. Thanks for the link to the club site. Not sure if it might be too collectible but maybe I'll have a lucky find. Take care sweetie.

Wow, what pretty pieces! You are definitely the Collectin Texas Gal!

My son stayed up to watch the lunar eclipse and he can't quit taking about how beautiful and magical it was.

Lovin those blue dishes, they're gorgeous!!! I slept through the eclipse...but it was cloudy and rainy here so it probably didn't matter...Merry Christmas to you and yours!!!

What gorgeous pieces! Absolutely beautiful! Thanks for sharing the pics of the eclipse, I missed it :\

Oh, I love the blue. I have few pieces of the green that my MIL gave me a year or so ago. I especially like the cake plate.

Beautiful photos of the moon. We didn't see the eclipse. It was a cloudy night here.

Gorgeous pieces and I love that color. No seeing the solar eclipse for us, clouds...I won't make it to 2094!

Your Moon and Stars Glass is Gorgeous. Nearly as gorgeous as the Moon we have been seeing. The sky has been amazing. Thanks for sharing
MerryChristmas and BlessYourHeart

Just stopping by to wish you a wonderful Christmas and a Blessed New Year. My New Years resolution is to be a better blogger this year. We will see.
Denis

I like anything blue so these dishes are truly delightful! My kids were out watching the moon while this mama was sleeping soundly in her warm bed! Hee Hee! Anne