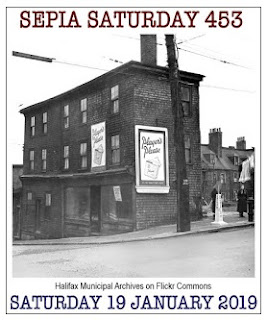 Sepia Saturday 453 photo prompt is somewhat of a challenge for me with it's three story store front, Players cigarette advertisement, overhead wires, and barely visible clothes line.
My first thought was a picture of my grandmother's house whose backyard clothes line ran along the back of a feed store.
Can you imagine hanging out clothes and instead of sunny, blue skies and a fresh smelling breeze, the view is a huge tobacco ad plastered on the building that blocked the sun, and the breeze smelled like chicken feed.
I couldn't find the picture in my files, so on to the next thought.

My Dad's lifelong addiction to cigarettes and cigars.
He started smoking at the young age of ten and probably smoked grapevines and his Dad's Bull Durham tobacco.  ﻿﻿﻿


I know about that since, also at an early age, I was an expert at holding the paper in a half tube, tapping in the tobacco, pulling the Bull Durham string held between my teeth, rolling the papered tobacco, licking the glued paper edge, and lastly...twisting the ends just right.  ﻿﻿﻿﻿﻿
That was an important last step to not only to keep the tobacco from spilling out, but to keep my grandfather from lighting a torch that had the potential to set his eyebrows on fire.
I have no clue about Players Cigarettes, but I have first hand knowledge and experience with Camel Cigarettes.  Camels were my Dads brand of choice.
Lordy, those stunk, and as a young tobacco expert, I figured the stink came from the same ingredient found in Bull Dung Durham.  I could not imagine smoking Camel or Bull poop, so smoking behind the barn with my brother was limited to Mother's filtered Winston cigarettes.
It only took a few puffs of choking, coughing and burning eyes for me to quit.  I think Mother did the same...she quit, too.  Now, my brother persevered, mostly because he liked matches.

My dad and your dad could've been buddies. My dad started smoking at age 9, but I'm not sure what his brand at that time was. However, Camels were his cig of choice when I was growing up. He died of lung cancer at age 80. Given his history, he was mighty lucky.

Oh dear, did your brother survive the barn fire? The way you said his smoking days ended in a fire, I took it that his days ended, but I hope it was just his smoking that ended! I rolled my own cigarettes for a while...but they sure tasted awful...so I went back to menthol filters...for the 8 years I smoked.

Yes, our Dad's could have been Camel smoking buds. After giving up Camels, mine smoked and inhaled Tiparillo cigars adding to the lung cancer that took his life at age 61...not so lucky in living a longer life. Guess he should have stayed with the Bull Durham rolled cigarettes. My grandfather lived a long 98 years and smoked till the very end.

Yes, he survived setting the barn on fire, and continued to smoke for many years, but quit when our Dad died of lung cancer. Has now been a nonsmoker for many years, but remained a firebug with a lot more fire power than matches...he's a retired welder.

Interesting how people rolled cigarettes. I never knew that.

Your words made me visualize that scene pretty well.

My grandfather smoked Camels too and I can remember the aroma that was almost a cologne for him. So tragic that many of his generation succumbed to tobacco addiction. He joined the Marines at 16 and probably rolled his own in sailor fashion.

My dad liked roll his own cigerette and used this brand. Although I don't recall a bull on it.
But every so often he would get pack of winstons.
Coffee is on

Not only did they roll them by hand...there was a cigarette rolling device as well. My grandfather had one which made cranking out those Bull Durhams much faster.

Funny how a prompt will bring back such vivid images and memories.

Yes, it might have been cologne to the smoker, but I remember my grandfather reeked of cigarettes and his fingers were tobacco stained. My Dad joined the Navy at 17 and probably started the Camel habit then.

There were several brands of bag tobacco and papers, too. We saved the bags for the pennies we earned rolling cigarettes.

My Dad smoked 2 1/2 packs of cigarettes a day. I think his favorite brand was Lucky Strike. Unfortunately back then no one was savvy re: second-hand smoke so what my sisters and I called "regular stuff" (having to clear our throats & cough repeatedly - especially in the morning) was actually the result of that second-hand smoke from Dad's cigarette smoking. I actually tried to smoke in high school because so many were doing it, but I hated the taste, couldn't multi-task while I was smoking, and it certainly wasn't good for my singing voice, so I said the heck with it and gave it up in short order!

Yes, growing up with a smoker in all likelihood impacted many of us in more than with future health issues. Yes, high school smoking...had to give it a try, too. Didn't last long for me either as an athlete, it was too much of a risk...so I understand about a singing voice.

I had a great uncle that rolled his own cigarettes and I was always impressed by his skill. One of the best things about participating in Sepia Saturday is how a photograph can lead you to an unexpected memory.