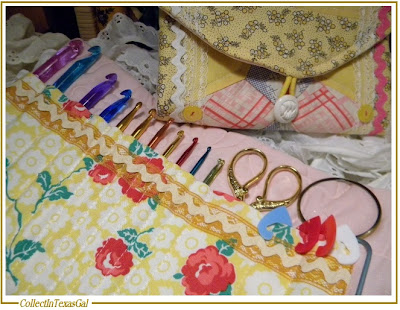 I know you have heard the old proverb
"Measure Twice and Cut Once"!
Proverbs are short expressions of popular wisdom. The wisdom is in the form of a general observation about the world or a bit of advice, sometimes more nearly an attitude toward a situation. Wikiquote

Over the years I have learned to not only Measure Twice and Cut Once, but to go ahead and Cut TwoAttaTime Once and often times several more than two, depending on the project.

TwoAttaTime works great when you are doing a mini-production line.  Especially if you are developing a new idea or trying out a new pattern...like the two Crochet Hook Clutches I've just finished. 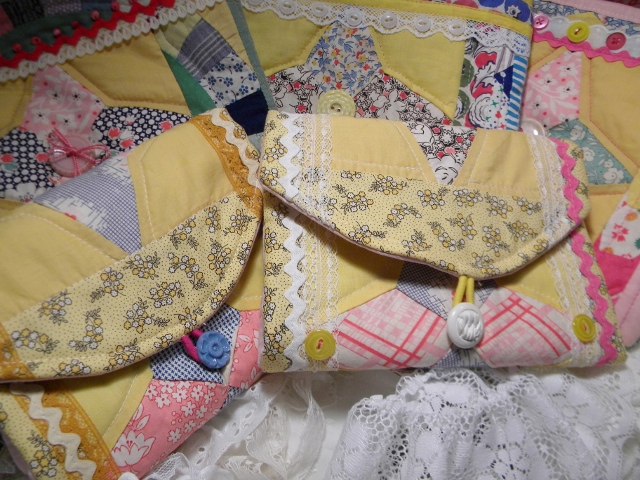 ﻿
These used up the last of the Vintage Star Blocks and will be a nice match to the Zipper Bags.
As with the Zipper Bags, I was able to use up some more lace, rickrack and vintage buttons...Yay!
The Crochet Hook Clutch Pattern is from a SewSheCan contributor Little Birdie Secrets.
Give it a try and remember to Measure Twice and Cut TwoAttaTime Once!
Oh!  I almost forgot....Stitch TwoAttaTime, too!
Posted by Sue McPeak at 9/04/2013

They are very cute! You're a fabric wonder!

"Sew" cute are these little pouches. Perfect for crochet hooks. I have mine in a plastic storage bag. This would be much better. Thanks for sharing these lovelies.

Those little clutches are adorable!

That's cute! And smart! Cut two atta time!! I so enjoy your blog. The sewing you do is awesome, wish I had that talent. You really have some interesting and intricate work. It's beautiful and makes me jealous that I'm not talented in that way. It seems it comes natural to you. Kudos!

You are just too smart and too talented. I always love your creations. Just like I love you.♥

I tend to do 'two at a time' too. If I mess up, then I have a spare, if all goes well, then I have double the fun, for half the work time. cute needle clutches.

Apply the same principle to cooking -- go ahead, make a double batch why don'tcha.

I admire your talent. You are a special gal and I love visiitng here and catching up with you.