Poinsettia Points...I Get The Point! 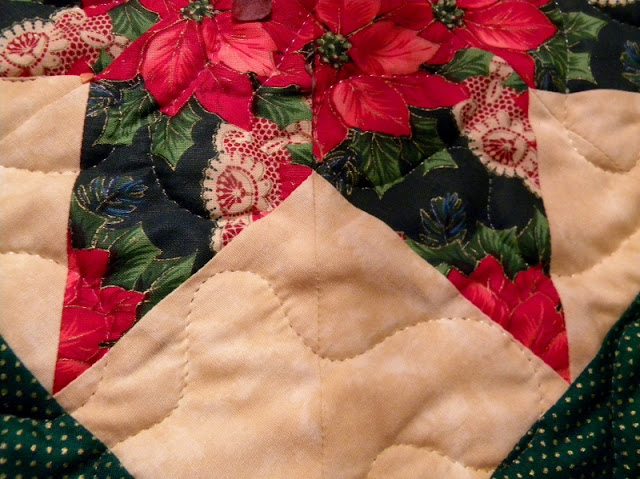 There are a couple of Points I would like to make about Poinsettias
that have nothing to do with Quilts!
Did you know they were named after a person, and that they are not native to the United States?
In 1825, Joel Roberts Poinsett, the first US Minister to Mexico, introduced the plant to this country.
In Mexico it is known as "Noche Buena", which means Christmas Eve. 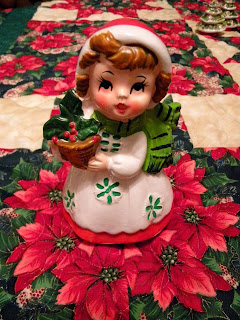 The Noche Buena's association with Christmas began in 16th Century Mexico, where the legend tells of a young girl who was too poor to provide a gift for the celebration of Jesus' birthday.

The tale goes that the child was inspired by an angel to gather weeds from the roadside and place them in front of the church altar. Crimson 'blossoms' sprouted from the weeds and became beautiful poinsettias.

From the 17th century, Franciscan friars in Mexico included the plants their Christmas celebrations. The star-shaped leaf pattern is said to symbolize the Star of Bethlehem.

You can read more about the interesting history, the creation of the Poinsettia industry in the United States and the Poinsettia Poison Myth  on Wikepedia....HERE. 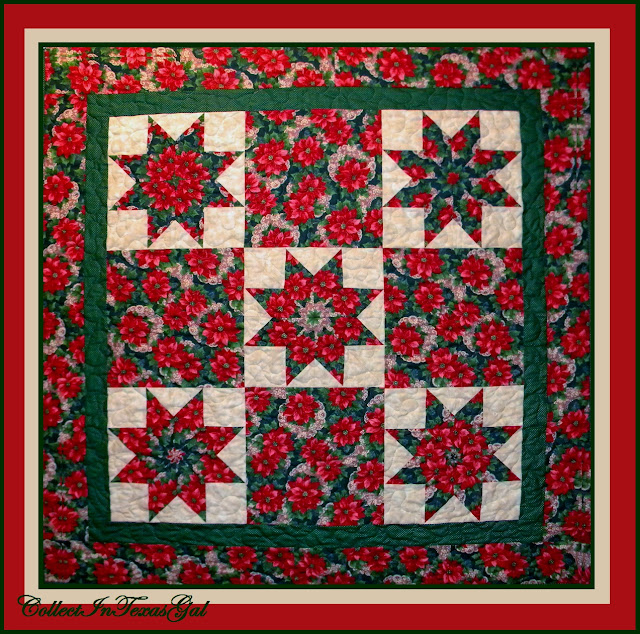 Now about Poinsettia Points in Quilts....I GOT Them...FINALLY!
I have to say, though, it took awhile and lots of Pointy Practice!
I started out to make a Christmas Bed Quilt using Bethany Reynolds Stack and Whack Eight Pointed Star pattern.  Then I got sidetracked and the Star Blocks got put in a WIP Basket....for several years.  As I said...FINALLY...I got back to the Points of the Poinsettia Blocks and made TWO Wall/Table Topper Quilts.  So, Yes, I Get the Point of Poinsettias....
﻿ 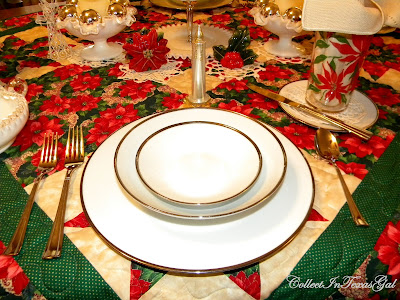 Beautiful quilt! Wow, looks like a lot of work, but so worth it! Thanks for stopping by my blog. Have a great day!

Love your beautiful table topper. Guess we all have those projects that have been neglected. It's always fun to finally give them the attention they need. Yours turned out beautifully.

Thanks Pam and Carol....I'm getting in the mood to make another Christmas Quilt. Like I don't already have enough...but I do love Christmas Fabrics.

Enjoyed the history on poinsettias. My greatest love is quilts tho. Yours are simply gorgeous. I have several, old and new, but none are Christmas.

Your quilts look great, and I hope you find the third sister.

Now some of the information on poinsettias I knew but some was new to me, always good to learn something new.
You do create beautiful quilts !
(())

Hi Sue, This poinsettia post is so beautiful. I love reading the history and the quilts are so pretty. So much work in putting these quilts together.

The Lefton girls are darling. it would be awesome to find the 3rd one. Check Ebay.

The most beautiful poinsettia's I have seen were in Hawaii. We spent two weeks there in January a few years ago and the poinsettias were like trees. Gorgeous.

Happy days ahead during the Christmas festivities.
Hugs, Jeanne

I enjoyed the Pointsettia history - I'm a total geek when it comes to learning new things. Guess what I'll be telling everyone that has a pointsettia.... :D

Love those lovely RED table runners & table toppers you made.

What a beautiful quilt~! I love the colors you used in this and Poinsettias are a favorite of mine!
hugs, Linda

Oh so many beautiful flowers in that post. Who doesn't love Poinsettias!
Merry Christmas :)