A Sister is A Sister Forever 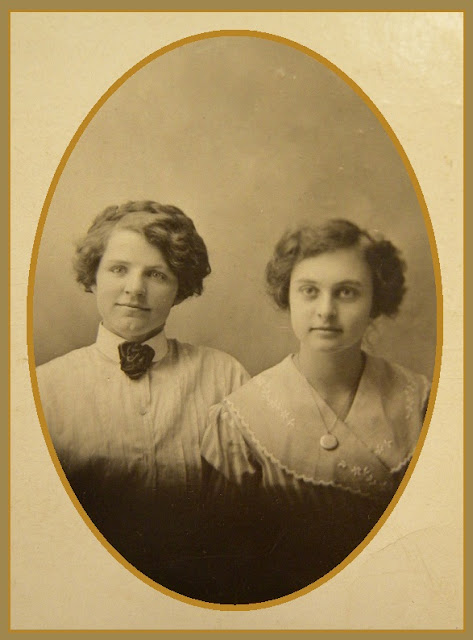 ﻿
These last few weeks have been spent reading and sorting through 'Family Group Records' passed to me from my Aunt Irene. She's the one who wrote the 'Time Capsule' letters I told you about in the post 'She's A Keeper...I'm A Keeper...We Are Keepers'.   Along with the 'Records' came an Album of Photos from the mid-eighteen hundreds.

Have I mentioned that those photos are of Family Members going as far back as my Great Great Grandparents?  It has been literally a 'Blast from the Past' identifying and perserving these Records and Photographs.

I've been a 'Collector of Vintage Photographs' for quite sometime, and these Vintage Family Photos fit seamlessly into the Collection.  So much so that all the 'Vintage Photo Collection' have become my family, and they all have a story to tell.

Irene and Bea were born fifteen months apart.  That pretty much says it all about how my grandmother must have felt during those months.  It certainly set a pattern for many of life's events for the two sisters. 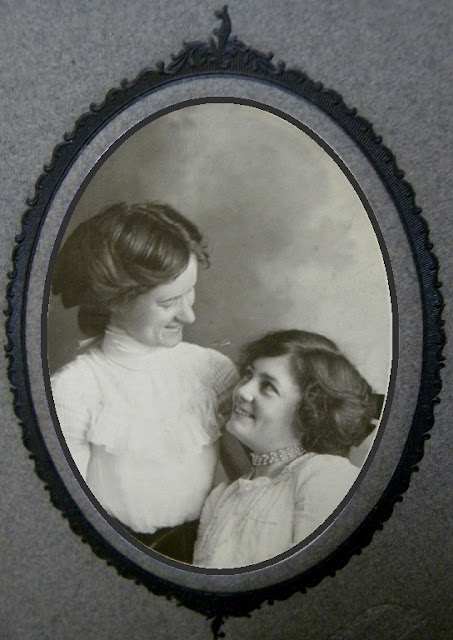 Together they helped raise their younger sister and three brothers after their mother and father diviorced.  An almost unheard event in the 1930's, but still a fact of life that these two sisters faced while trying to keep their family together and growing into young women without their mother's guidance.

The 'Close Encounters' continued when Irene married at age seventeen and Bea married fifteen months later at age eighteen.  And though they lived the rest of their lives many miles apart, they remained the truest of sisters until their deaths....five months apart.

A sister's a sister forever,
A bond that diminishes never,
A friend who is kindly and caring,
A sibling God chooses for sharing.

Few ties as deep and profound
And with so much affection abound
Though some thoughts are seldom expressed
Love endures and survives every test.

Of the constants that rest in the heart,
A sister's a primary part.
She'll always be there when you need her-
You listen, you value, you heed her.

As growth, independence you ponder,
Your feelings grow deeper and fonder;
And life tells you one thing thats true:
A sister's a large part of you. 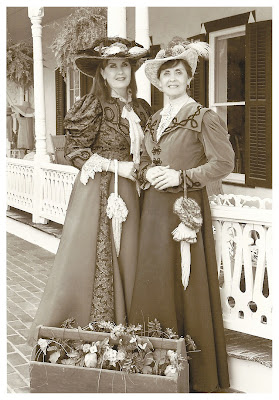 Dedicated to My Beautiful and Treasured Sister!
I love you, Connie Marie!
Posted by Sue McPeak at 8/01/2011

I am going to send this to my sister - thank you.

Ohhh, my golly! You got me! Kleenex time here, my friend. This is just beautiful. Yes, those photos are treasures. Don't you just love holding them, looking into the pictures as memories flood ...

I have many even further back to a 4 time grandfather. These are my most precious gems.

I'd say there's a strong legacy of loving sisters in your family. Cute old time photo of you and your sister!

I loved reading about your precious aunts! I sure wish I had a sister:( Have a nice day! Twyla

I'm missing my sister so much. I'll be seeing her next week and I'm so excited. It's been almost a year! I love these sentimental words and the story you have shared.

This a wonderful posting. I love the poem. It certainly makes me miss my sister.
Karen
Ladybug Creek

First - beautiful photos and how wonderful that your Aunt knows the family history! The photo of Vera and Beatrice is so heartfelt the way that they are looking at each other.You and Connie Marie look pretty darn cute all dressed up too!

I love reading about your family histor. This one is so sweet. Think I'll call my sister today.

Sue, this is beautiful. We love old photos, too. In fact, we just finished a photo gallery on a wall in our stair landing. You might want to come by to see it. We're pleased with the outcome.

I've missed you.♥ Work has me crazy busy.

Dearest "SweetSue" I cherish this beautiful tribute to Sisters...and am touched to my heart and soul by your dedication. SISTERS FOREVER....
With Love,
ConnieMarie

What a lovely story! I found you tonight through a mutual friend of ours Susan from Art of Mine.
We were talking on the phone tonight and she suggested your site to me. I am so happy that she did.
I too live in Texas between Austin and Houston.
Looking forward to getting to know you
Maggie

You two girls are just lovely in those outfits. I think it is unusual that Vera and Ruth passed away in the same year. My father-in-law's brother married my nother-in-law's sister. Both brother's and both sister's all died within months of each other. I wish I had a time capsule of my family. Hugs~ Ames

Hello Sue, You must know how I adore this post. I have four sisters and we are soooooo close. Your photos and story about your Aunts is a true treasure. How absolutely awesome that you have wonderful photos of your family going so far back in your family tree. I envy you. My mom was one of six sisters and all have passed on except one. We adored all of them.
Thank you for this sweet post my dear blogging friend.
Love, Jeanne