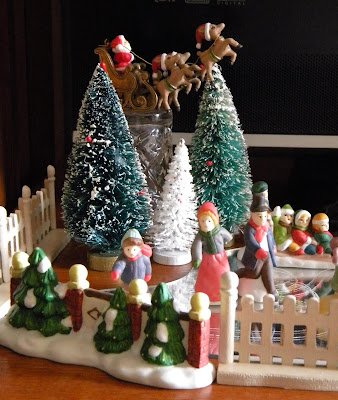 "Nana, one of the Skaters has her arm broken".
"Yes, I know, my observant Granddaughter,
it's what happens when you try skating on 'Texas'ThinIce'".

Yep, this GRIT tried 'Ice Skating' ONCE!
At the 'Mall Ya'll'! Imagine that...IceRinks in Texas...in the Summer!

Being a 'RollerRink Skater', I figured I could Ice Skate...no problem!
Dorothy Hamill I was NOT! Not even close, and I so wanted to do a Double Axel!

Instead the only Axel on Ice for this Iowa born, (IceSkating State), GRIT was on the Axel attached to the TailBone!
And that was from trying to skate going Forward!
Now, I could skate on those 'ThinBlades' all day going BACKWARDS! 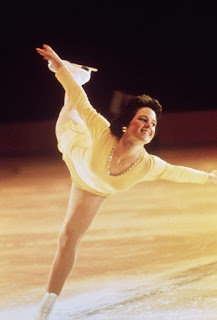 
Wrap the Skating Figurines and Tailbone Axel in BubbleWrap!

Did you follow the 'Hamill Hair Trend'? Yep, if I couldn't do the 'Hamill Camel Spin', at least I could do the HairDo! 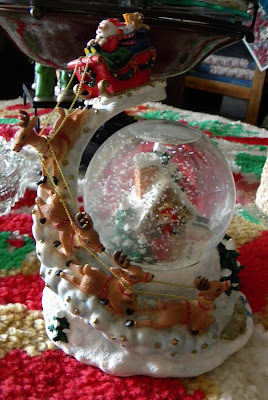 Do you 'Collect Christmas Stuff'?
I'd really like to know!

What's your most Unique Christmas Collectible?

ONE of mine are the Santa Snow Globes!

Most of mine have been gifts from
Friends and Family who say,
"Sue's EZ to buy for...She Collects Santa's"!

I love them All and enjoy decorating with them every Christmas! 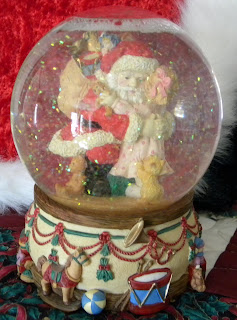 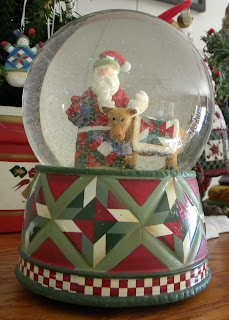 Precisely when the first snow globe, also called a waterglobe or snowdome, was made remains unclear, but they appear to date from France during the early 1800s. They may have appeared as a successor to the glass paperweight, which became popular a few years earlier. Snow globes appeared at the Paris Universal Expo in 1878, and by 1879, at least five companies were producing snow globes and selling them throughout Europe.
Initially snow globes consisted of a heavy lead glass dome which was placed over a ceramic figure or tableau on a black cast ceramic base, filled with water and then sealed. The snow or "flitter" was created by use of bone chips or pieces of porcelain, sand or even sawdust. As they became more sophisticated, the glass became thinner, the bases were lighter (Bakelite was popular during the Art Deco period) and the snow was made out of particles of gold foil or non-soluble soap flakes although nowadays, for health and safety reasons, small pieces of white plastic are used. Later, the liquid was changed to light oil, then water with antifreeze (glycerin or glycol). An added benefit was that glycerin and glycol slowed the descent of the snow.
History of Snow Globes from Wikepedia.
Posted by Sue McPeak at 12/14/2009

Hello sweet thing...
Who needs Dorothy anyway right? The haircut was good enough for me.

I love your beautiful snowglobe collection. The last one you shared looks alot like Jim Shore's work. I love them and thank you so much for sharing.

About 25 years ago I started collecting Snowmen. I have lots of them. Some I keep out year round. I think my love came to be because it doesn't snow here in the desert. I brought my own in.

Please stop by and say hi. I have written a poem for todays share. Something came to mind and I went with it.

Country hugs and much love, Sherry

Oh how I loved Dorothy Hamill. Still do she is such a good role model and seems like a very nice lady. I think you were brave to even get on the ice..me? I take my ice in the glass please!

I am an eclectic collector of Christmas decos. I have had many 'phases' of collecting, rocking horses, snowmen and cats....now I'm just enjoying pink things.

Yes, I had a Dorothy Hamill hairdo, didn't we all?
I love your snowglobe collection.
I collected Lenox Christmas pieces for awhile, but I haven't seen any of the larger pieces for awhile. Now, I'm liking vintage ornaments so, I've started a collection of the pinks and greens. Hard to tell what's next.

Hi Sue!
I had a blissful winter when I was a tenth grader. My friend Molly and I spent a few days skating on the swamp. We tried to do tricks on our old ice skates, but mostly we just enjoyed the quiet and each others' company. Later, skating at the rink with the kids . . . ouch.
Your globes are ultra-pretty!

Hi Sue, Oh yes I am a big fan of Dorothy's and of ice skating and dancing in general. I skated a few times as a child when we went to upstate New York for Christmas to visit my Father's family and then again about 10 years ago but it was slooooooooooo going and lots of holding onto the sides of the rink! Nope nothing at all like skating with four wheels on each footie. Your snow globes are beautiful and a fun collection. I don't do well with them either as all the ones I've treasured eventurally lose all their liquid when packed away, but I love looking at them. Hugs, Mollye

Your snowglobes are wonderful. I went to college in the mountains and saw all those injured in ski accidents hobbling to class every winter. I vowed never to try sports that involve sliding or gliding on ice and snow! But I love to watch ice skating on t.v.

I can hardly wait to see your Pink Saturday post. Could I possibly know your surprise?????

I've always loved watching ice skating. Your snow globes are so pretty. Lindsey and I like to collect vintage figurines like angels and santas. We also love santa mugs. Have a very Merry Christmas! Twyla

Hi, Sue,
I have never tried ice skates. Like you, I was pretty nifty on plain old roller skates, but I figured ice skates would be a tad bit harder. Those thin blades looked tricky to me. I love your snow globes. I have always been fascinated by them. There is something very magical when you shake them up. I hope you and your family have a happy holiday season, my fellow Texas gal! Vicki

NO! I did not do the Hamil hair cut...but I sure remember yours! Pretty globes. Enjoyed the history of them. See you very soon, sister.
love:0) conniemarie

I love your snow globes! My Christmas collecting urges change with each season. I went through a snowman phase, then decided to collect tree toppers. One of my friends asked this year how many trees I had throughout the house. I guess without really knowing, I have collected trees (not big ones that are decorated, just various small trees used as decoration). I love, love, love trees all year long....yes, I am a tree hugger! I wish they could talk and we could hear the stories of what they have seen. So, I guess without knowing it, I am a Christmas tree collector.
Denis